There is very little left for the Easter holidays and for next summer, so it is time to start choosing the destinations that we will visit during 2017. In case you need a little inspiration, in this post we offer you some very special destinations to visit this year. Prepared?

The Philippines is a unique country. Beyond its undeniable beauty, this country has a certain peculiar air that captivates those who know it. Its landscapes are beautiful, its beaches are paradisiacal, its volcanoes are imposing… but we can also find virtues in its delicious cuisine and in the hospitality of its people.

The Philippines is a great place to enjoy surfing and diving. Unlike in other Southeast Asian countries, in the Philippines the beaches are not overcrowded so it is a fairly exclusive destination. Its waters are clean and crystal clear, so you can see animals swimming such as sea turtles, whale sharks or coral gardens.

In fact, The Philippines is perfect for practicing ecotourism as the more adventurous can climb volcanoes, swim with sharks, take a trip to the jungle or enjoy the views of ancient terraced rice fields.

But the more urbanites will also enjoy the Philippines, especially in Manila which is a city of enormous contrasts as it mixes the modern with the traditional and the conventional with the exotic.

The American influence is evident although there are still traces of the Spanish presence in Manila, whether in the streets or monuments. Some of the most interesting places to visit are the University of Santo Tomás, the Fort of Santiago, the Manila Cathedral, the Church of San Agustín or the Sanctuary of San Antonio, among many others.

Located on the Caribbean coast of Central America between Guatemala and Mexico, Belize is one of the great paradises for scuba diving and snorkelling. As it is one of the few virgin redoubts left on the planet, it is an ideal destination for those in love with nature in its purest form. A large percentage of the country's surface is declared a protected reserve, so it is not surprising that many places are considered as authentic treasures.

In this sense, the coast of Belize has the longest coral reef in the western hemisphere, as well as an extensive system of sea caves. For example, its best known image is the Blue Hole (the great blue hole) to which you can dive among stalactites, stalagmites and even sharks.

From a cultural point of view, Belize has interesting Mayan sites hidden in the lush jungle that are located south of the Yucatan peninsula. Some of them, such as Caracol, have been excavated and restored, presenting spectacular stone reliefs as well as very ingenious architecture.

It is also worth visiting Belize City, on the coast of the Caribbean Sea, the most populated city in the country and former capital before it was moved to Belmopan in 1970. 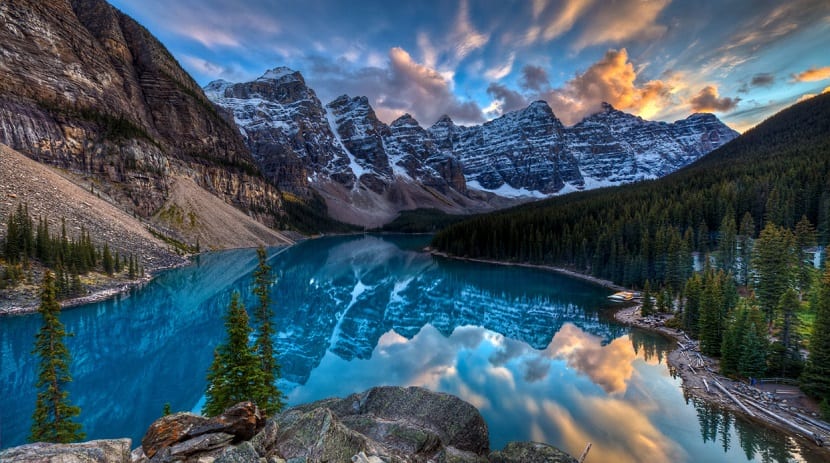 According to Lonely Planet, this North American country will be the best destination to travel in 2017. This usually includes emerging destinations, countries that celebrate some kind of commemoration or that claim visibility for their merits to the attention of the traveler.

There are several reasons why Canada occupies the first place in this ranking (we will reveal the rest of the winners later), some of which are: its large infrastructures dedicated to tourism, the next 150th anniversary of the country's independence that will be celebrated by all the highs and a weak Canadian dollar with which many international tourists will be able to do great things on their vacations.

Moreover, Canada is a land blessed by nature. It is the second largest country on Earth and has an incredible variety of landscapes: beaches, mountains, glaciers, wheat fields, forests ... In this sense, it does not matter what time of year we visit the country because there are always exciting and interesting plans to do here.

In any Russian city, large or small, there is always a corner of interest that explains why the Russian historical-cultural heritage is a source of fame and pride for this country. It is not surprising, therefore, that tourism in Russia is on the rise this 2017. Especially when next year it will host the Soccer World Cup and in all probability the number of tourists will increase and prices will become more expensive.

Moscow, in terms of hotels and restaurants, is still somewhat expensive but in the rest of Russia everything is cheaper. For example, you can discover cities like Novgorod (first Russian capital), Tomsk (in Siberia) or Kazan (in Tatarstan) and the country in the Trans-Siberian.

The two most popular cities in Russia are probably Saint Petersburg and Moscow. Both are worth seeing and should be enjoyed little by little. In the capital you will be able to contemplate the Kremlin, Red Square, Saint Basil's Cathedral or the Bolshoi Theater while Saint Petersburg you will be amazed by the Church of the Resurrection of Christ, the Kazan Cathedral, the State Hermitage Museum or the Palace of Peterhof.

Egypt is an incredible country that is worth visiting at least once in your life. Especially if you are passionate about Ancient Egypt and the time of the pharaohs.

If you have always wanted to emulate Indiana Jones and discover the ancient treasures of this country such as the temples of Abu Simbel, the pyramids of Giza, its famous sphinx, the temple of Karnak or Luxor, among others, and navigate the mythical river Nile , this 2017 is your moment.

Nor can you miss a few days in Cairo, a city full of magic and mystery. Once there you have to visit the Citadel (a medieval Islamic fortification built in the XNUMXth century and which for a long time was the residence of Saladin the Great), the Carriage Museum, the Egyptian Military Museum, the Al-Gawhara Palace-Museum and, of course, the Egyptian Museum in Cairo. Another place that you cannot miss is the Al Azhar Park, perfect to enjoy the sunset.

Khan el-Khalili Market is one of the best in Cairo to buy souvenirs. It dates from the XNUMXth century and was the epicenter of the spice trade in its time. Here you can find everything from clothing to essential oils.