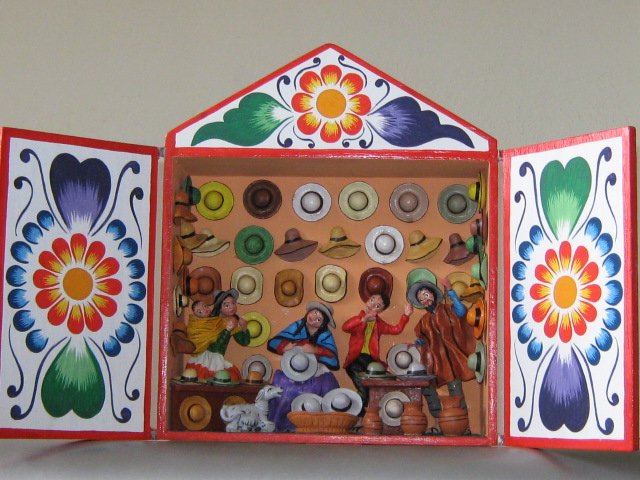 El ayacucho altarpiece It is one of the most recognized expressions of Peruvian art. It is an artistic expression of the region of Ayacucho which has its origins in the eighteenth century.

The closest antecedent to the current altarpiece is the sanmarkos or San Marcos box, developed between the XNUMXth and XNUMXth centuries, a tribute to Saint Mark, patron saint of cattle.

The altarpieces are rectangular boxes, usually made of cedar. Although there are no standard measurements, classic altarpieces measure 32 centimeters high x 26 centimeters wide. At the bottom where the figures are placed is about 6 centimeters. The back is usually covered with thin wood and the doors are attached to the box with leather strips. Unlike the sanmarkos, the themes of the altarpiece are associated with traditional and religious motifs such as processions, bullfights and rooster fights.

They exhibit pregnant virgins and long-necked saints. Patriotic demonstrations such as military parades are also represented or are dedicated to characters, presidents, generals, peasants and heroes. They have even been used to represent political allegories.

It is important to mention that the word "altarpiece" is originally a large group located behind the altars of the churches.