Compared to the warm and crowded waters of the Mediterranean Sea, the Baltic Sea can seem like a cold, distant and unknown place. However, its waters bathe the coasts of nine countries in Northern Europe and Central Europe. that are home to beautiful secluded beaches, medieval treasures that seem out of a tale as well as islands, bridges and canal cities that were once the commercial capitals of the world.

Given its peculiar location, Stockholm is made up of 14 islands in a bay sheltered by the Baltic Sea that are connected by 50 bridges. Today it is a modern city addicted to technology, design, fashion and haute cuisine, but its old town, Gamla Stan, tells us about bygone times through its cobbled streets, its historic buildings of the centuries XVIII and XIX, its shops, its churches and its charming shops.

Stockholm is covered on foot. Strolling aimlessly through its streets and discovering classic visits such as the royal palace, the Town Hall and the Stadshuset tower from which you have the best views of the city, the Saint Nicholas Cathedral, the Summer Palace and many other places .

The epicenter of Stockholm is Vasterlanggatan, a lively street full of restaurants, galleries and souvenir shops where you can discover the local gastronomy and enjoy the atmosphere of the city. Then you can resume the route to visit some of the most outstanding museums in Stockholm such as the Abba museum or the Vasa museum. If you have time you can also go explore the green island of Djurgarden or visit the largest spherical building on the planet. The striking thing about this place is that due to its facade you can go up in a glass gondola.

The capital of Finland elegantly merges with the Baltic and sits on a chaos of bays, islands and coves that trace a complex coastline.

Helsinki can be discovered in many ways, but one of the coolest is to rent a bicycle and go out and explore its streets by pedaling. One could say that the charm of this Finnish city lies in its historical and cultural heritage: the Orthodox Uspenski Cathedral, the Protestant Cathedral in Senate Square, its Art Nouveau buildings or its museums, where the national heritage is preserved. very careful.

This city has a multitude of galleries and more than 50 museums for all tastes such as Natural History or the Ehrensvärd-museum, located in the former residence of the commanders of the Suomenlinna fortress, which shows us what the daily life of the Finns was like back in the XNUMXth century. Another essential visit in Helsinki is Suomenlinna, the so-called fortress of Finland.

A very special place to see during a visit to the capital is in the center, the market square known as Kauppatori. A very touristy place where there are flower stalls and cheap food and from here the ferries and cruises of the archipelago leave.

Located on the coast of the Baltic Sea, Pärnu is the seaside capital and the quintessential Estonian resort town. During winter it is a quiet city where visitors take advantage of fishing or ice skating. However, on sunny days when the weather is nice, entire families from all over the country and even from neighboring Russia or Finland come to Pärnu to lie in the sun, play sports or simply relax while admiring the beautiful scenery.

Other travelers come to Pärnu in search of wellness tourism where spas are the main tourist attraction. Many people want the mud-based thermal treatments known as Estonian peat that are applied here. It consists of a mixture of water and neighborhood that has very beneficial properties for the body.

You can't leave Pärnu without visiting the neighboring island of Muhu, which is two and a half hours away by bus. Here you can see the Estonia of bygone times: with its typical houses and the church of Muhu, the oldest in the country. 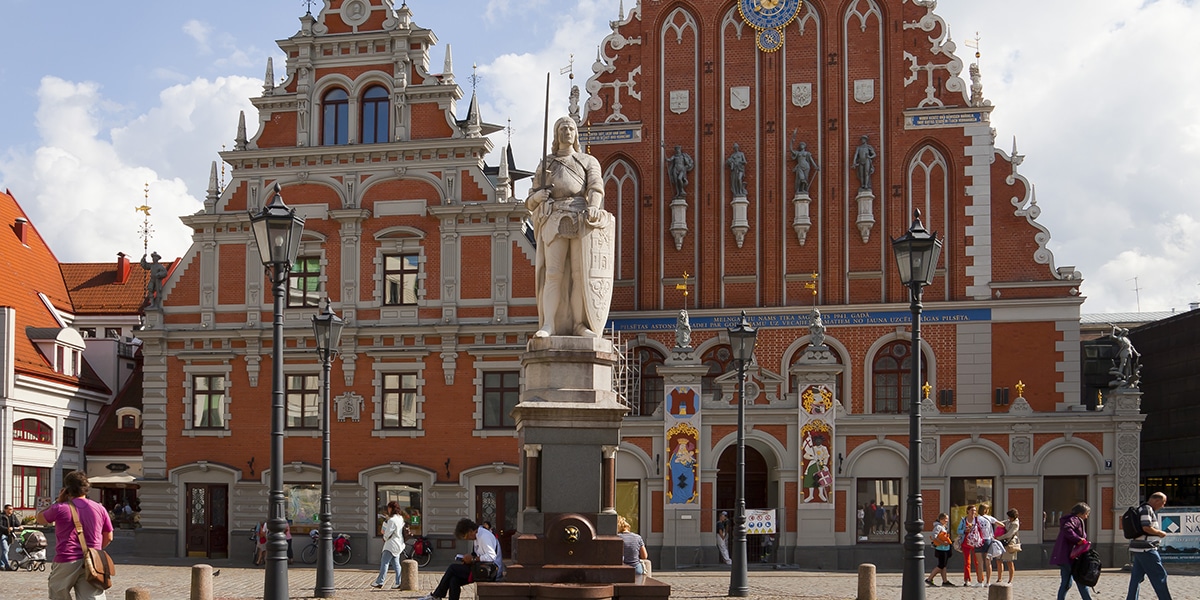 Despite having a historic center declared a World Heritage Site by UNESCO, the largest of the Baltic republics is one of the least known cities on the continent. Did you know that it is the city with the most art nouveau buildings on the planet? More than 700 modernist buildings!

The best way to get to know Riga is to walk through the streets of the center called Vecriga, which despite having been destroyed and later rebuilt in the early 90s, retains all its original medieval charm.

Here we can find a place known as Rastlaukums, the town hall square, which in the Middle Ages used to be used as a market although contests, tournaments and other kinds of celebrations were also organized. Near this square is the House of the Blackheads belonging to the Riga merchant brotherhood. It was destroyed in World War II and rebuilt in 1999.

There is so much to see in Riga. Another example of this is the Riga Castle dating from the XNUMXth century, where the residence of the President of Latvia is located. We cannot forget the largest square in the old town, that is, that of the cathedral where the largest medieval temple in the Baltic is located and is a national architectural monument.