Mexico has wonderful sites, both historical or archaeological and natural, and the Copper Canyon they are an example of the latter. A surprising landscape that you may not yet know, so if Mexico is on your list of travel destinations, add this place to the pyramids, museums and beaches.

These cool canyons are in the state of Chihuahua, to the northwest of the country and bordering the United States. These lands are rugged and among coniferous forests, tropical species and even the occasional snowfall there is a canyon system larger and more impressive than the Grand Canyon of the Colorado. 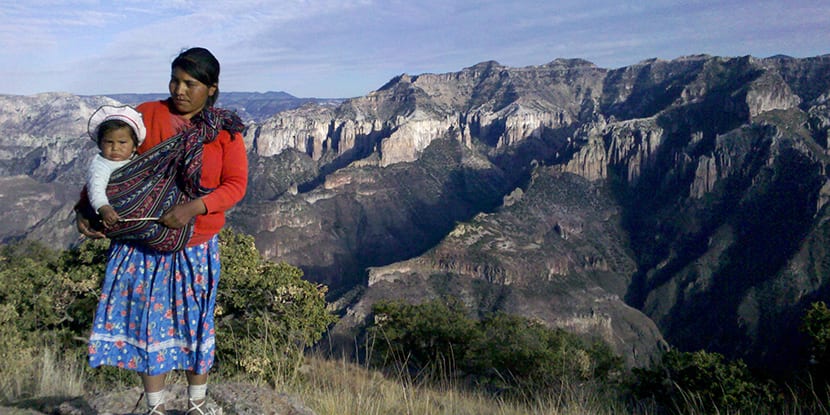 It is also known as the Copper Canyon and it is nothing more than a wonderful chain of several ravines that they are in the Sierra Tarahumara, as we said, in the state of Chihuahua. Although we all know the Grand Canyon of the Colorado in the United States, it is larger, four times as long and almost twice as deep. Do you believe it? Impressive!

The Copper Canyon they have 60 thousand square kilometers and although they are not as well known as their neighbor they are very well prepared to receive tourists and there are many activities that we can do there to get the best out of them.

These ravines, these canyons, They are the ancestral home of the Tarahumaras people, whose cosmogony speaks of the fact that these geographical features were formed when the world was created, when the stones were still liquid, that is, more than 20 million years ago. A marvel. Why are they called Copper Canyon? Because in a ravine there are copper mines. The truth is that in reality there is not a single ravine but several and the most important are those of Urique, la Sinforosa, Batopilas, Candameña, Chínipas and El Gigante.

El Gigante is a gigantic rock 885 meters high, in Candameña there are two beautiful waterfalls, the highest in the country, in La Sinforosa there are also a couple of beautiful and famous waterfalls, in addition to being the place where the native communities and Urique live , for example, it is the deepest canyon in Mexico with almost 1900 meters deep.

Tourism in the Copper Canyon

It must be said that luckily a train goes through them and it is the obligatory route. The train goes by the name of «El Chepe» even though it's the train Chihuahua to the Pacific, a line that connects several cities with the Pacific coast and travels in total about 673 kilometers crossing precisely the famous ravines. It dates from the late nineteenth century and has its starting point in the city of Chihuahua. Then it stops at Cuauhtèmoc, San Juanito, Creel, Divisadero, Témoris, El Fuerte and Los Mochis, among others.

The train goes through short and long tunnels, 86 in total, and 37 unforgettable bridges. The route is beautiful and the passage through the ravines is a postcard. The train travels to Los Mochis through the ravines and does so in a period of 17 hours. If you don't want to travel so much you can do a single station and come back. Of course you can use the train to get closer to the canyons but can also be reached by car or bus From Chihuahua, it will be about five hours, or fly by helicopter to enjoy the views.

In addition to the train, we must not forget the cable car. Is he longest cable car in Mexico and the views offered by the little trip are great. Travels almost three kilometers at a height of 40 meters and carries about 500 people per hour. It is relatively new as it was inaugurated in 2010. Others fabulous views You have them from the restaurant and viewpoint that is in the Barrancas Park, at a good height.

Windows everywhere and a sector with transparent floor they are the main attraction. To eat, drink and take photos almost from inside the clouds. At this point, the metaphor is worth it, I suppose that being so high does not cause you fear or vertigo so if that is the case then you can sign up for the Zip Rider, something similar to a zip line although with a larger harness in which the passenger can be seated, much more comfortable.

The Zip rider of the Copper Canyon is great and you go through the two and a half kilometers of travel. You fly! You've already traveled by train, took a cable car ride, drank a coffee at the viewpoint, flew on the zip rider and… it was the turn of the Via Ferrata offering an hour and a half tour climbing rock walls and rappelling down. You dare?

These are the best activities that a tourist can do in the Copper Canyon, but there are more attractions. Before we talked about waterfalls and in truth the ravines hide fabulous waterfalls like the Cusarare waterfall, the Basaseachi waterfall or the Flying Stone, for example. These last two waterfalls are falls of 270 and 500 meters high and are within the Cascada de Basaseachi National Park.

The name, according to a legend, derives from the name of the beautiful daughter of a king who imposed so many conditions on his fiancees that she committed suicide by jumping into the void, with a broken heart.To these natural visits you can add a cultural walk to the Tarahumara missions , make we walk, leave the campor even enjoy some horseback rides. There are mountain bike rides, excursions fishery, Rafting in white water, rock climbing and for the more… calm, bird watching.