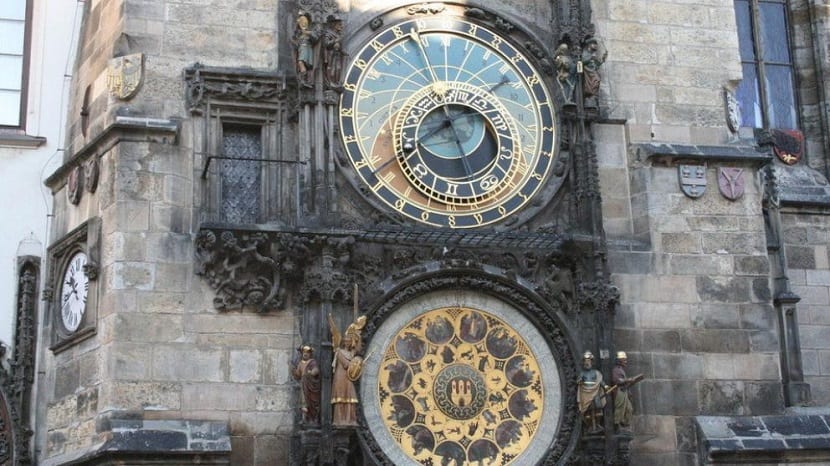 The Prague Astronomical Clock is a national emblem, pride and charm for the city. Legend has it that the carpenter who created it in the Middle Ages did such exquisite work that those who commissioned him blinded him to make sure there was no other watch like it. The watchmaker, in revenge, then acceded to its interior and stopped its mechanism, at the same time that his heart stopped beating.

Since then, it is believed that the movement of its needles and the dancing of its figures ensure a good future for Prague, while if it stops working it brings bad luck. Here we get to know one of the most prominent icons of Prague better.

The Prague Astronomical Clock is located on the south wall of the City Hall. To visit it you have to go to the old town square.

In the lower sphere of the Clock Tower, the months of the year are represented by means of paintings made by Josef Mánes in the XNUMXth century. You can also see the signs of the zodiac and, in the center, the Coat of Arms of the Old City. Inside there are twelve drawings that represent the months of the year. On each side of the calendar, there are again figures that correspond to: a philosopher, an angel, an astronomer and a chronicler.

The upper sphere of the Clock Tower is the Prague Astronomical Clock itself. Its function was to represent the orbits of the Sun and the Moon, not to tell the time, contrary to what it may seem.

In the upper windows of the Astronomical Clock the main attraction of the clock takes place: the parade of the twelve apostles that occurs every time the clock strikes the hours. In addition to the apostles you will find four additional figures that represent the capital sins: vanity (symbolized by a mirror), greed (represented by a merchant) or lust (symbolized by a Turkish prince).

On the other side, there is a skeleton that symbolizes death. Every hour, between 9:00 and 23:00, when the theater opens, the skeleton rings the bell to warn us all of our fatal fate and nods while the rest of the figures shake their heads. The small windows above are opened and the dance of the apostles begins, ending with the crowing of the rooster, which announces the new hour.

Other aspects of the watch

The astronomical clock as a whole is very striking but one of the things that attracts attention is also its color. The blue circle in the center represents the Earth and the darkest blue symbolizes the vision of the sky. The red and black areas indicate the parts of the sky that are above the horizon. During the day the sun is located in the blue area of ​​the background, while at night it is located in the dark area.

One of the most recommended plans to do in Prague is to climb to the top of the clock tower, from which you can get spectacular views of the entire Old City and take unforgettable photographs. The tower's hours are from 9:00 a.m. to 22:00 p.m. from Tuesday to Sunday and from 11:00 a.m. to 22:00 p.m. on Mondays. The price of the tickets is approximately 130 crowns.