Although the beach season is now ending, the truth is that we always want more. So we are going to tell you about the best beaches in Spain. Surely some will be missing, because Spain has many kilometers of coastline and beaches to surprise us. We will never tire of discovering new sandy areas and visiting those that are considered the best.

In our country we have a lot of coastline, not in vain it is a peninsula, so it is difficult to choose between the best sandy areas. Obviously, there are many more, but we are going to talk about the ones that are popular. Those beaches that should not be missed if we visit the community in which they are located.

Macarella and Macarelleta in the Balearic Islands

We start with some small beaches or coves located in Menorca. It must be said that their charm is always present, but they are coves that are very crowded during the summer season due to their popularity and that they are not very big. Cala Macarella is a wide sandy area with rock walls on both sides, so it is protected. Its crystal clear waters in turquoise tones that invite you to swim are unmistakable. In this cove there is also a bar-restaurant as the only service. Cala Macarelleta is considered as the little sister, where nudism is also usually done. There is a path cut into the same rock that joins both beaches, which is highly recommended.

Bolonia beach, one hour from the city of Cádiz and twenty minutes from Tarifa, is one of the most popular beaches in all of Spain. It is a beautiful beach in crescent shape with a central part which is next to the parking lot and is where you usually see more people. In the northwest area is the great dune of Bologna, a natural monument of great beauty. Nor can we miss the wooden walk with the beautiful pine forests that frame that beautiful pattern of virgin and natural beach. Nearby you can also visit the archaeological site of Baelo Claudia. It is an archaeological site from the XNUMXnd century BC. by C.

In the area of ​​the Cabo de Gata natural park we find the Genoveses beach, which is one of the best. It is a virgin bay, which is not reached by roads or buildings, which further increases its charm. There is a parking lot nearby but we will always have to walk a bit. Is a virgin beach with shallow water, which makes it ideal for family bathing. In the southern part of the bay is the Morrón de los Genoveses, a hill that has beautiful views of the center of San José. 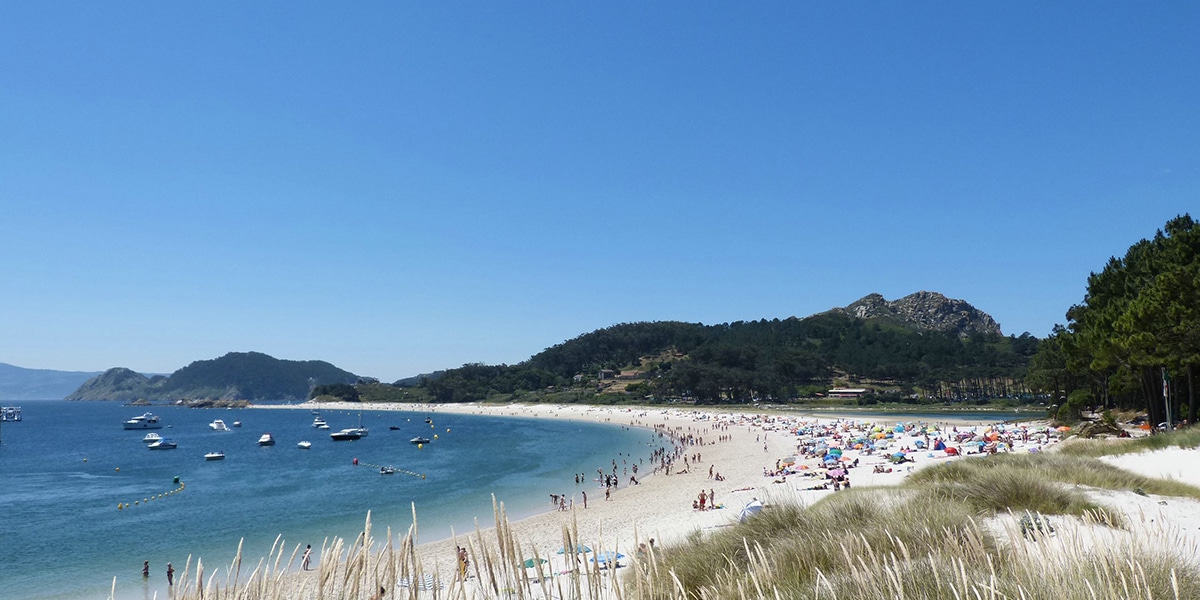 This is a very popular beach, just as popular are the Cíes Islands. It is common for catamarans to arrive every year during the summer with people who want to spend the day or several days on the island. It is part of the Natural Park of the Atlantic Islands and is a protected area. The island has a campsite and some services, although it has quite unspoilt areas, several hiking trails and a lighthouse. Playa de Rodas is its main beach and in summer it is quite crowded. Its sands are white and soft and the waters clear, which makes it compare with a Caribbean beach, although the temperature of its waters is usually cold.

Located in the town of Carnota is the beautiful beach of Carnota. In Galicia we find many beaches of great beauty in incredible natural spaces and this is one of them. We know that its waters are cold but it is worth visiting. It is more than seven kilometers long so we will not feel that it is crowded or in high season. It has a beautiful area of ​​marshes with great ecological value. Without a doubt this is one of the beaches that is worth seeing in Galicia.

In Asturias we also find some beaches that are worth it. The Playa del Silencio is located near the town of Cudillero and it is a beach with a unique enclave. Its access is not very good, even if we go by car, since it has a single road with some parking space on the sides. The beach is shaped like a shell and is surrounded by vertical cliffs. There is a viewpoint to take beautiful photos and then you can go down to the beach. It is a virgin beach with no services as it is a protected area.

On the island of Fuerteventura, in the municipality of Pájara, is the Cofete beach. It is in an almost virgin state because you have to access it by unpaved tracks. There are also no tourist services but this is what makes it so special. Have 14 km kilometers long, so it is impressive.