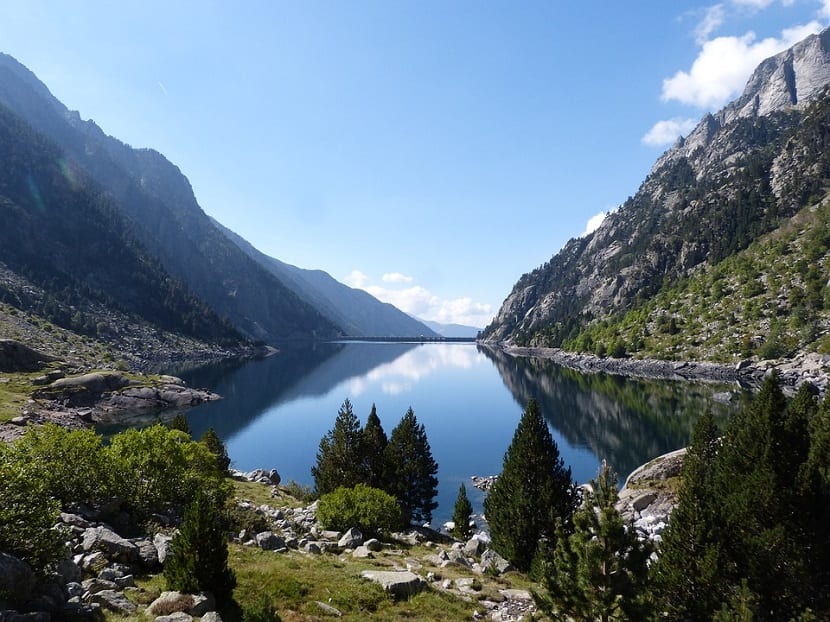 To the north of the Iberian Peninsula, between Andorra, Spain and France, is the Pyrenees, a mountain range that stretches for 430 kilometers from the Mediterranean Sea to the Cantabrian Mountains. In the Catalan area, in the provinces of Gerona and Lleida, the beauty of the landscapes and the mountain villages is impressive to see in any season of the year. What places do we recommend you visit on your getaway to the Catalan Pyrenees?

Vielha is a small Pyrenean city capital of the Arán Valley, in Lleida, which is located at an altitude of 974 meters and surrounded by peaks that exceed 2.000 meters. It is a quiet and traditional town that is home to almost half the population of the valley.

Its wooden and stone houses as well as the mountains of the landscape make Vielha an amazing place to visit. The larger streets contrast with the narrower ones and they all make up an interesting commercial network dedicated especially to mountain and adventure sports since it has several nearby ski resorts. However, in Vielha there are also many charming restaurants where you can enjoy the local cuisine.

From a cultural point of view, some of the tourist attractions of Vielha are the church of Sant Miquèu, the porticoed building of the town hall, the tourist office or the post office building inside which is the Christ of Mijaran from the XNUMXth century. The manor house of Ço ​​de Rodès, the Wool Museum and the Ethnological Museum are other sites that complement the visit.

In the Ripollés region, in the province of Gerona, Camprodon is located, a beautiful municipality on the banks of the River Ter and at the foot of the mountains that is a fascinating place for fans of hiking and adventure sports, since in nearby there are multiple paths and routes to enjoy nature.

This town in the Catalan Pyrenees has its origins in the Middle Ages and has very interesting attractions to visit. Its symbol is the Pont Nou, a stone bridge from the XNUMXth century from which you have beautiful views but other places to visit are the Sant Pere monastery, the Santa María church, the Carmen convent or the Paseo de la Font Nova .

Like Vielha, its proximity to several ski slopes make it a popular town during winter to practice the typical sports of this season.

It is the largest natural park in Catalonia thanks to its more than 60.000 hectares that are divided into two regions of ilerdenses: Pallars Sobirá and Alt Urgell. It was created in 2003 to conserve the forests of the Catalan Pyrenees (fir, red and black pine) as well as its native fauna (deer, wild boar, roe deer, white partridges, otters and brown bears among others).

Located in the province of Lleida, it is one of the most outstanding destinations to visit as part of the route of the Romanesque churches of the Vall de Boí. In this place surrounded by nature and stillness you can enjoy observing a unique environment.

With regard to culture, this town in the Catalan Pyrenees has two jewels of Romanesque art such as the church of San Clemente and Santa María, both declared World Heritage Sites by Unesco and belonging to the XNUMXth century.

Well known are the wall paintings at the head of the church of San Clemente (Pantocrator, apostles, saints and scenes from the Bible and the Apocalypse) which are considered as masterpieces of European Romanesque art. It is also worth going up to its bell tower because from it you have beautiful views of the valley.

This is another of the towns in the Catalan Pyrenees that is worth visiting. It is located in the province of Gerona, very close to France and which ceased to belong to this country in the seventeenth century after the Treaty of the Pyrenees.

Its houses are made of stone, as is the pavement of its streets, which gives it a very characteristic appearance. Among its main tourist attractions is the Gothic castle-like church of La Mare de Dèu dels Ángels, its XNUMXth-century pharmacy, the oldest in Spain, transformed into a museum, and the Llívia castle from whose location you can see the entire village and surrounding mountains.

To the north of the Costa Brava is one of the natural wonders of Gerona: the Cap de Creus Natural Park, the first maritime and land park in Catalonia. Located in the east of the Catalan Pyrenees, it forms a landscape of bays, coves, rocks and cliffs of 10.800 hectares of land and 3.000 hectares of sea.

The interior of this natural park is a paradise of meadows and forests that can be known through routes and excursions.

Full path to article: Travel News » Trips » Ecotourism » 6 places in the Catalan Pyrenees that you should discover