Find cheap destinations in Spain is always very helpful. They are places full of charm, monuments and good gastronomy that will cost us little money and will make us enjoy our stay a lot.

We can visit these destinations on our vacations. But, since they are cheap, we also have the option of taking advantage of them to make a getaway and then look for another place to spend those. On the other hand, we can choose between the sea and the mountains, between the north and the south or between the east and the west. From Asturias but also Andalusia and from Castilla y Leon but also Catalonia, there are these cheap destinations in Spain. Without further ado, we are going to show you a selection of them.

Region of Liébana and the Picos de Europa

The entire Autonomous Community of Cantabria It is a wonder that offers you the possibility of enjoying the sea and the mountains in the same day. In just half an hour by car, you can go from one to another. Likewise, it gives you the option of getting to know wonderful towns such as the medieval Santillana del Mar or the monumental Quotation marks. All this without forgetting its capital, the stately Santander.

But we have chosen the region of Liébana for our tour of the cheap destinations in Spain, both for its good prices and for its beauty, especially advisable if you like the mountains. Not in vain, it is nestled in the wonderful Picos de Europa.

Among the many mountain routes that you can do in the area, we will mention the one that runs through the incomparable Desfiladero de la Hermida, which offers you stunning views. Or those that start at the viewpoint of The Cable, which you can also go up by cable car from Source of. For example, the so-called path of the Pembes ports or the one that leads to Sotres, already in Asturias.

But you also have monuments to visit in the Liébana region. In the beautiful monumental villa of Jars, declared an artistic historical site, you have the medieval tower of the Infantado and church of San Vicente, which combines Gothic, Renaissance and Baroque styles. For its part, in Chameleno you have the historic and spectacular monastery of Santo Toribio de Liébana, one of the holy places for Christianity and that houses a relic of the Lignum Crucis. Very close, likewise, is the Cueva Santa, where, according to legend, the saint retired and which is pre-Romanesque in style.

Finally, in Big head of Liébana you have the Romanesque church of Santa Maria and in crazy la Hermitage of Our Lady of the Assumption. But, above all, keep in mind that, through the region, the call passes Lebaniega Route, which links the coastal Camino de Santiago with the French one. Finally, don't leave the region without trying the hearty and tasty stew that also bears the name of Lebaniego.

Ávila, a cheap destination in Spain in Castilla y León

View of Ávila, with its medieval wall

The entire Autonomous Community of Castilla y Leon offers you places to spend a few days for little money. But we have chosen the city of Ávila for its historical value, its numerous monuments and its exquisite gastronomy.

With a historic center declared a World Heritage Site, the great symbol of the Castilian city is its medieval wall Romanesque style and perfectly preserved. Taking advantage of one of its cubes, the majestic Cathedral of Christ the Savior, which was the first Gothic of those built in Spain. Likewise, around it, you can see stately homes such as the Mansión de Los Velada, or the palaces of Valderrábanos and Rey Niño.

Another spectacular example of the religious architecture of Avila is the basilica of saint vincent, Romanesque from the XNUMXth century. But we could name many others, such is the monumental wealth of the city. For example, the churches of San Pedro and Santiago, the Royal Monastery of Santo Tomás, the convents of San José and La Encarnación or the hermitages of San Segundo and San Martín.

We could tell you the same about the civil heritage of Avila. We have already mentioned some of the palaces that you can see near the cathedral. But the city has many others. It is the case of Palace of the Eagles, an imposing mansion from the XNUMXth century; the of the Davilas, whose oldest part is from the XIII; the of Bracamonte, attached to the Puerta del Mariscal, or that of the deans, with its beautiful Plateresque façade.

Finally, don't leave Ávila without trying its famous steak, its Barco beans and, as a sweet dessert, the no less well-known Santa Teresa yolks, a delicacy that receives its name from the saint and mystic from Avila.

Benidorm and other towns on the Costa Blanca 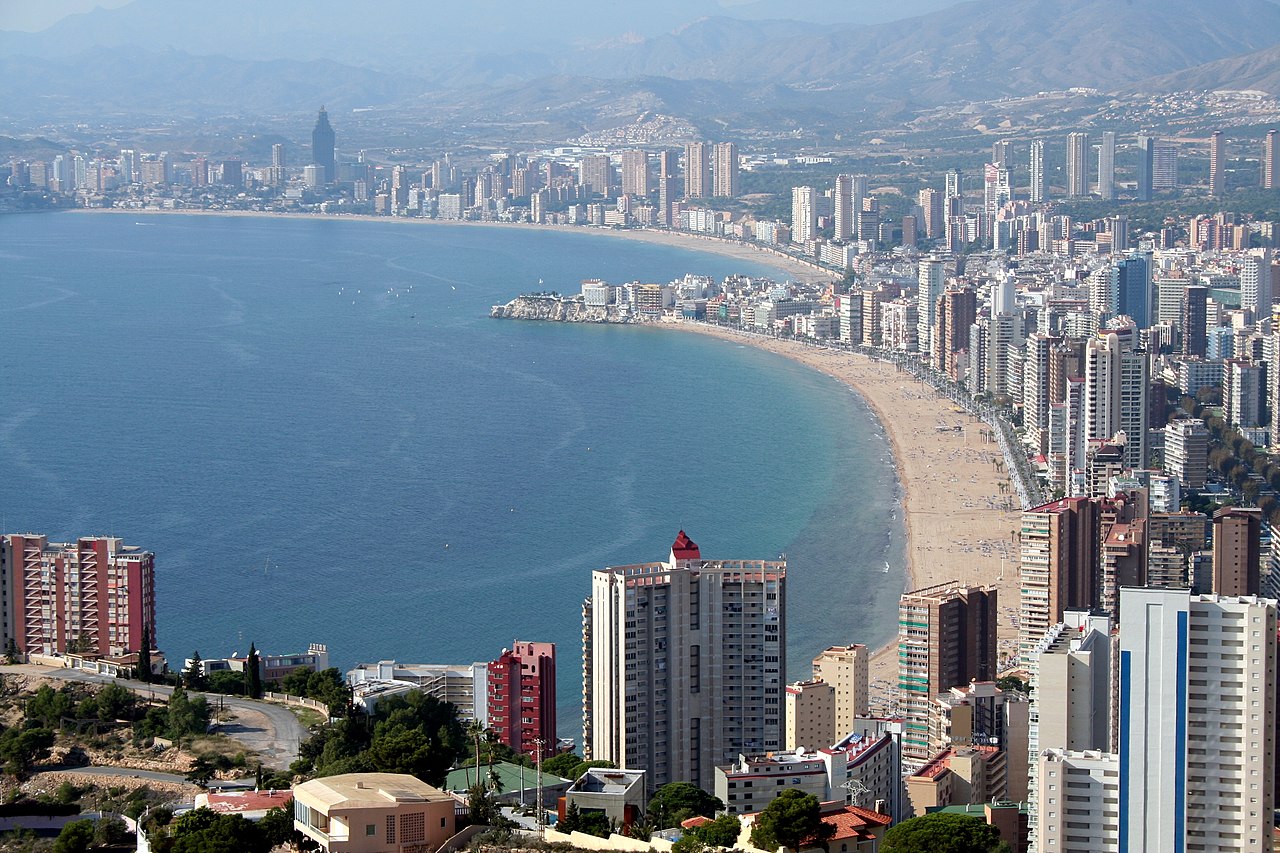 Despite its tourist popularity, Benidorm is among the cheap destinations in Spain, especially for its wide range of hotels. Known as "the New York of the Mediterranean" for its large number of skyscrapers, in the city of Alicante you can enjoy three magnificent beaches: those of Levante, Poniente and Mal Pas, to which are added the coves of Tío Chimo and La Almadraba.

But you can also enjoy hiking trails along the frozen saw, of which, curiously, the island of Benidorm is a foothill. And, above all, get to know the magnificent nightlife of the town.

As for its monuments, visit the church of San Jaime and Santa Ana, neoclassical construction of the eighteenth century made to house the Virgin of Suffrage, patron saint of Benidorm. However, more spectacular due to their dimensions are the skyscraper of which we spoke to you. Among them stand out the Intempo, with its gigantic M shape; the Neguri Gane, with its semicircular terraces, and the Gran Hotel Bali, with its fifty-two floors.

On the other hand, if you prefer a quieter environment, you can choose other towns on the Costa Blanca that are also among the cheapest destinations in Spain. For example, Calpe, with its spectacular Peñón de Ifach; Altea with its peculiar orthodox church; Torrevieja, famous for its salt flats and beaches, or Denia, guarded by its spectacular castle.

Mojácar and other points in the province of Almería

Mojácar, one of the cheap destinations in Spain in the province of Almería

With the towns of the province of Almería something similar happens to what we told you about the Costa Blanca. They are frequented by tourists, but they have a wide range of hotels. That's why they are cheap. Among them, we have chosen Mojácar for its magnificent beaches, no less than six and all with Blue flag. They are those of El Cantal, El Descargardor, Lance Nuevo, Marina de la Torre, Venta del Bancal and Piedra Villazar.

Also, if you practice scuba diving, this is a privileged area. The calls Seabed of Levante Almeriense They encompass some fifty kilometers of coastline that stand out for their wonderful diversity and their large meadows of posidonia oceanica.

As for the monuments, you can see archaeological sites such as the one in The Stacks, from the Copper Age. And also the church of Santa Maria, built in the 1980th century using masonry and ashlars. However, inside it stands out the pictorial decoration of the German Michael Sucker, made in XNUMX.

Likewise, in the surroundings of Mojácar you have the defensive constructions of Macenas Castle y Atalaya del Peñon Tower. But, if you prefer to choose another town in Almería, you can opt for the tourist one Roquetas de Mar, with its spectacular Castillo de Santa Ana, a recently restored fortification from the end of the XNUMXth century; for Carboneras, in the Natural Park of Cabo de Gata-Níjar, or, if you prefer an inland holiday, Velez-Blanco, with its impressive monumental heritage presided over by the Castillo de los Fajardo.

Finally, don't leave the province of Almeria without trying the tabernero (a spicy ratatouille) or a good grilled fish. And, for dessert, a piece of sweet hornazo.

Cuenca and other inland capitals, cheap destinations in Spain

Precisely, if you prefer cultural trips, the cities of the peninsular interior are among the cheap destinations in Spain and they have a lot to offer you. We have chosen Cuenca, but we could tell you the same about Soria, Logroño o Zamora, Por ejemplo.

In the city of Cuenca, the hanging houses, also called del Rey, which seem to look out over the high gorge of the Huécar river. Currently, three are preserved, dated between the XNUMXth and XNUMXth centuries. But Cuenca is a World Heritage Site for many other monuments. Among these, his precious Cathedral of Saint Mary and Saint Julian, which is one of the earliest examples of Spanish Gothic.

As for the civilian, we advise you to visit in the city of Castilla La Mancha the Episcopal palace, which houses the Diocesan Museum; the mangana tower, located in the old Mudejar neighborhood; the City Hall and Provincial Council buildings and San Antón and San Pablo bridges. All this without forgetting the so-called "skyscrapers". They are constructions of just three or four floors that, however, have many more in the back because, like the hanging houses, they look out over the Huécar river gorge.

In conclusion, we have presented some cheap destinations in Spain. But we could tell you about many others. For example, towns on the Asturian coast such as Cudillero o Luarca; towns on the island of Mallorca such as Alcudia y Pollensa or inside the province of lerida with its medieval towns and its Romanesque heritage. Don't you think interesting places to visit?