In the stupendous high valley of the Lozoya, at almost 100 meters of altitude and between two mountain ranges, Rascafría is located, a beautiful medieval town near Madrid. Among its emblematic buildings are the old Casa de Postas, the Monastery of El Paular, the Casa del Guardia de los Batanes, the Casa de la Madera, the Casona from the XNUMXth century that functioned as a hospital and the parish church of San Andrés Apóstol from the XNUMXth century. XV.

Its natural environment is of enormous scenic beauty as it is home to the Giner de los Ríos Arboretum, the Peñalara Natural Park and the Valdesquí station. Today we discover Rascafría! Can you come with us?

Located in the northwest of the Community of Madrid, in the Lozoya Valley area at an altitude of 1.100 meters, Rascafría is one of the most beautiful villages in the mountains and is perfect for nature lovers.

The history of Rascafría is closely linked to that of the El Paular Monastery, two kilometers from the urban center. It is a Carthusian monastery founded in the fourteenth century that experienced its heyday at the end of the fifteenth century and during the sixteenth, under the reigns of Enrique IV of Castile, the Catholic Monarchs and Carlos I.

Built in 1.390 as the first Carthusian monastery in Castile at the express wish of Juan I, who before his death told his son Enrique II the exact place to build it in a place where there was hardly a small hermitage.

The highlight of the visit is its Baroque chapel, the cloister with the 52 paintings recovered from the XNUMXth century, the Chapel of the Kings and the Patio de las Cadenas, considered one of the most beautiful in Europe in its style.

Crossing the road, in front of the Paular Monastery, we find the Puente del Perdón, built with granite and three semicircular arches in the mid-XNUMXth century to replace the original from the XNUMXth century, badly damaged by the Lozoya river floods.

Its name responds to the legend that tells how the prisoners were executed here, who crossed the bridge if they were innocent or taken to the House of the Gallows, otherwise. 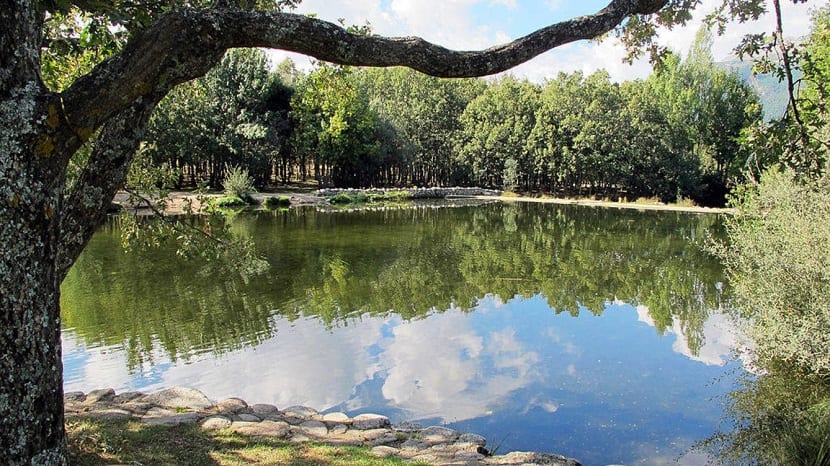 Continuing along the path from the Puente del Perdón, you reach the Potario Forest, better known as the Finnish Forest of Rascafría. It receives this name because of the great resemblance it presents with the Scandinavian forests. Here we can find a beautiful lake with a jetty surrounded by majestic poplars, birches and firs.

Next to the church is a XNUMXth century complex known as La Casona, a building with an orchard and garden, which in its day functioned as a hospital.

In the center we find the Rascafría Town Hall, a neo-Mudejar style building from the early XNUMXth century decorated with colorful red bricks.

This austere-looking temple on the outside was built in the XNUMXth century. It is surprising for its plateresque interior. The tower of the Church of San Andrés Apóstol was added later around 1.561. After being damaged during the Spanish civil war, it underwent several restorations that culminated in its current appearance.