If you like history, ancient civilizations and mysteries, Egypt must be on your route of travel destinations. Once in your life you have to go to Egypt and see its wonders first hand.

The temples of Egypt They are impressive and you can see them in many photos and on television, but seeing them live and direct is something that is priceless. Are you going to miss them? Here we leave you a list of the best temples in Egypt, those that you have to see yes or yes.

These constructions they are thousands of years old and without a doubt they are something glorious. A first trip to Egypt amazes all travelers, but if you are lucky enough to go several times the surprise never ceases and that is great.

Undoubtedly Egypt has the greatest temples in the world and in general lines they date from the fourth century BC. It is true that many of them are world famous, but there are also others that are beautiful and do not have as much press.

In Egypt everything is ancient, in every place one steps there are ancient ruins or temples. From Cairo to Luxor, following the Nile to Aswan, it is impossible not to come across some of these wonderful constructions.

First you have to name the Karnak Temple which was built between 2055 BC and 100 AD It is dedicated to three gods, Amun-Ra, Mut and Montu, and it must be said that its main temple it is the largest religious site ever built.

An astonishing corner is the Hypostyle Hall, a site covered with the help of colonnades that was common in Egypt but could be studied very well at this site. This room is somewhat huge, with 134 columns and 16 rows. Here it is convenient to do the tour with a guide and listen carefully to the details.

El Abu Simbel temple It was originally built in the lowland of the Nile, but With the construction of the Aswan dam, it had to be moved into a modern engineering masterpiece. That happened in the 60s and the original construction site was left on the bottom of Lake Nassar.

Today the Abu Simbl Temple is safe: There are 20 statues of Ramses II and it was built around 1265 BC, but those colossi are in very good general condition. What is usually done is to hire a tour from Luxor to Aswan and it is well worth traveling the 280 kilometers between those two points. Another way is to take the Nile cruise to Aswan and spend a couple of days there.

The Temple of Medinet Habu is dedicated to Ramses III and some of its columns retain their paintings. It is on the west bank of Luxor and It is the second oldest ancient temples in Egypt.

A temple that has always amazed me, because the reconstruction allows opening a window to the past, is the Mortur Temple of Hatshepsut. Hatshepsut was a queen who died in 1458 BC and her elegant and enormous tomb it's close to the Valley of the Kings, on the west bank of the Nile. The queen was one of the most important women of her time and one of the most successful pharaohs, reigning for 21 years.

The temple it is built on the side of a huge cliffIt has three levels that go into the desert and archaeologists say that in their time these lands had great vegetation, although now they are a great desert. Plants may be missing, but it's still an impressive site. There are many guided tours of the Valley of the Kings in general.

El Temple of Ramses II you have to know it too. After all, Ramses II was one of the most famous and popular pharaohs. It was originally a mortuary temple very similar to that of Medinet Habu, for its huge statues dedicated to the king.

El Luxor Temple It is world famous. The temple is in the city itself, on the banks of the Nile and it's a wonderful sight, especially at night when their lights come on and you can photograph it. The temple is in what used to be Thebes, and appears to have been built under the XNUMXth and XNUMXth dynasties. Honor the god Amun-Ra and it has different corners from different times.

The building is well preserved and still has many structures, especially the colonnade that connects two of its courtyards. And the shrine where Amon was honored still has some of its original tiles. Obviously, it is World Heritage.

El Kom Ombo Temple It is on the Nile and is dedicated to two different gods, Horus and Sobek. It is a twin temple with two buildings built in mirror. It is not as old as the others because it was built under the dynasty ptolemaic (of Greek origin and after Alexander the Great). Later, under Roman rule, some extensions were made. Here they have been discovered, for example, 300 crocodile mummies and today they are exhibited in the Crocodile Museum that you can visit.

El Edfu temple is on the west bank of the Nile and it is one of the best preserved in the country. Its construction began in 237 BC and ended in 57 AD, by the hand of Cleopatra's father, Ptolemy XII. It still has its roof so it gives another feeling, closer in time.

El Temple of Seti I is at Abydos and contains a XNUMXth Dynasty inscription known as the List of Kings of Abydos, a chronological list with the cartridges of the pharaohs of each Egyptian dynasty from Menes to Seti I's father, Ramses I. The temple is above the Nile. 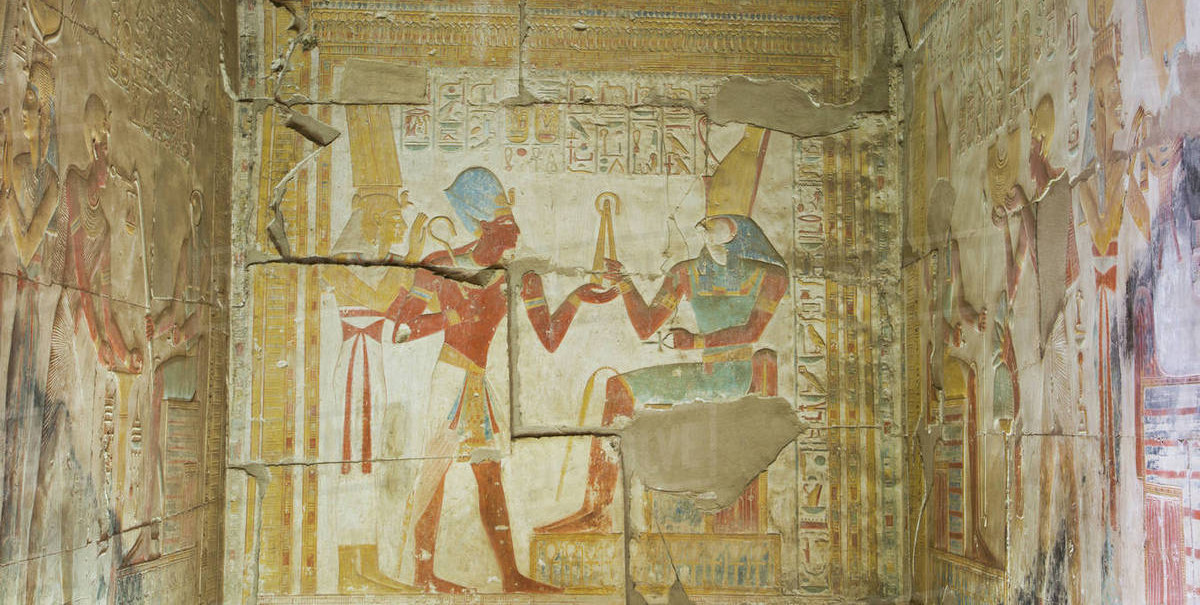 We can also name the mortuary temples of the Valley of the Kings, although they are not as flashy or impressive as the others. Here you can know the Temple of Ramses IV, that of Merneptah and that of Ramses VI. They have huge airy chambers, colorful paintings that reflect scenes from the Book of the Dead ... The truth is that after seeing so much bare stone, the bright colors, the space and the sense of peace of these places are surprising. There are no sarcophagi or anything like that, it all went to museums or thieves, but it is a site worth visiting.

Finally, the Colossi of Memnon, built around 1350 BC They are two colossi that represent Pharaoh Amenotep III in a sitting position. originally they guarded the entrance to the mortuary temple of that pharaoh. The temple of which they were part has almost disappeared and the colossi are quite damaged too, but you have to visit them.

To these temples he adds nights in the desert, afternoons in the bazaar, walks through Cairo, the visit to the Pyramids and of course, the tour of the Archaeological Museum of Cairo. That is, you will never be able to forget Egypt.