If you like the adventure tourism, outdoors and surrounded by Nature, this tourist destination is for you: the Islas Faroe. It is a group of beautiful islands that belong to Denmark.

They are also known as the "islands of the sheep", and are a total of 18 islands located in the North Atlantic. Here you can go hiking, mountain climbing, bird watching, biking, diving, fishing, surfing, horseback riding and enjoying the warm local atmosphere. Go?

The islands are about 320 miles north west of Scotland, half way between Iceland and Norway. They have been part of the Kingdom of Norway for a time but today they belong to Denmark, as a region that enjoys autonomy.

The islands they are rocky, with rough cliffs, windy, with eternal clouds in their skies, cold most of the year. As we said before, there are a total of 18 major islands, although there are more than 700 islets. They were formed about 60 million years ago, thanks to the volcanic activity of when it was attached to Greenland.

Get here too easy, no matter how far away they are. It can be reached By plane from many destinations: Paris, Reykjavik, Edinburgh, Bergen, Copenhagen and also, depending on the season, flights from Barcelona, ​​Gran Canaria, Mallorca, Malta, Crete ...

The airlines that fly to the islands are Scandinavian Airlines and Atlantic Airways and the closer to your destination you take the flight, the shorter the flight time. From Bergen or Edinburgh, for example, in an hour you are there. By last, by ferry Yes you can get there but already from Iceland or Denmark. It's slower, but lovely, of course, aboard the Smyril Line.

Of course, if you decide to go by ferry and indulge yourself, the trip can cost around 700 euros. It is the approximate rate to travel in August of this year with breakfast, lunch and dinner service. Round trip, yes, one person, without a car, and with certain luxuries because for that price you travel in an individual cabin.

People who travel by ferry usually come with their car, but if you arrive by plane once in the islands you can rent one or a motorcycle or a motorhome. The islands are well connected with routes and bridges and tunnels so it's great to get around here. There are stations for filling gasoline but you must be aware of the distances between them to recharge on time. With regard to tunnels under the sea there are two and both have a toll, of DKK 100, around 13 euros for a round trip.

Can one get around by public transport? Yes, it is efficient and relatively inexpensive. Ferries are partly subsidized by the state and cost DKK 15. There are multi-trip cardsFor example, for DKK 500 you can travel four days. They are used on buses and ferries. There are also tour buses and you can even take a little helicopter trip for DKK 125.

What to see in the Faroe Islands 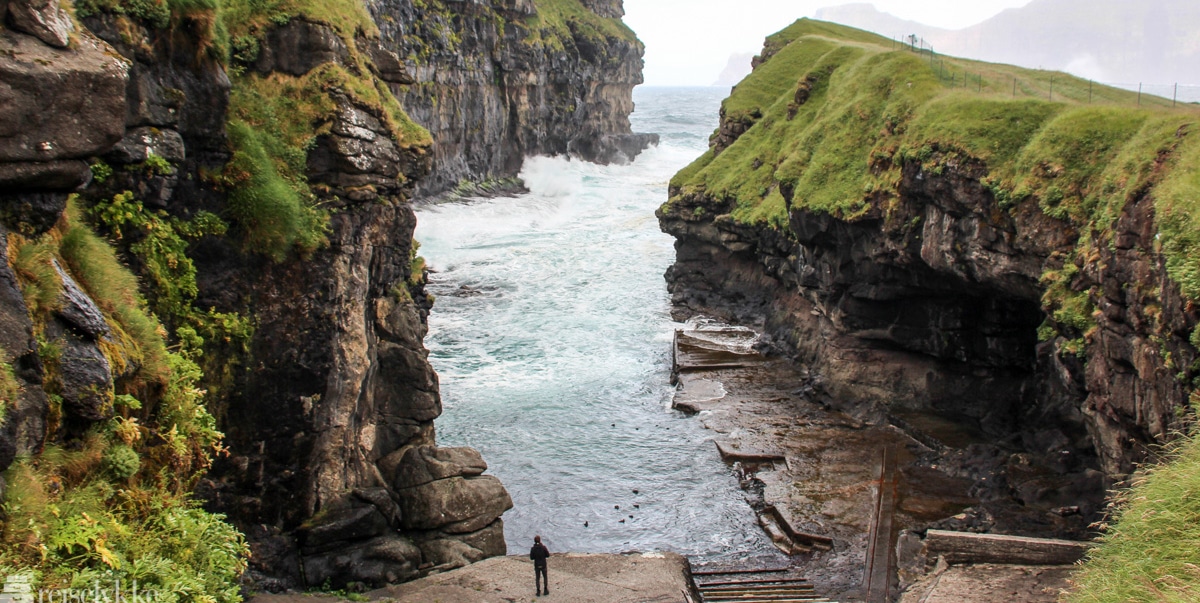 Beyond the activities we can do, what sites can we see? All the islands have something, a treasure, but of course if we think of the islands as a whole there are more popular places than others.

Gjògv is a village on the island of Eysturoy. It has a fantastic 200 meter long cliff that runs from the village itself to the ocean. It is a beautiful place, surrounded by mountains, with less than 50 inhabitants living in wooden houses and grass roofs. There are trails around to enjoy the views, a cute tea house, a guest house, and a campground.

Another special village is Mykines, with the same style of houses and a nice Lighthouse at the tip of the islet of Mykineshólmur. It is a remote island, with cliffs, rolling hills, great views of the sea and the other islands and also, a paradise for bird watchers. It is the furthest point from the Faroe Islands. Keep in mind that if you go between May 1 and August 31 you will have to pay DKK 100 round trip on the ferry, and if you go beyond the village, to the lighthouse, an additional DKK 2250. All the money is for the maintenance of the birds.

Tinganes is the historic center of the capital, Tórshavn. It has two ports and is said to be one of the oldest sites, if not the oldest of all, where a parliament was once held. This happened around the year 900 and it was a Viking parliament that began to be held every summer to discuss important issues. It occupies the small peninsula in the center, an isthmus that divides the port into two parts.

The historic center is very well preserved and maintained, it preserves all its charm medieval. But you can also visit other sites such as Faroe History Museum, Nordic House, Natural History Museum, National Gallery, Tórshavn Cathedral ...

Skansin It is also in the capital and is a old fort from the XNUMXth century which had the objective of defending the city from pirate attacks. French pirates, in fact, destroyed the original fort in 1677, after demanding 200 sheep, 500 pairs of gloves, 1200 pairs of stockings ... Later, it was rebuilt and today its cannons can be seen and visitors can enjoy its terrific views of the sea.

One of the classic postcards of the islands are the Vestmanna cliffs. This is a town in the western part of the island of Streymoy, a popular port until the Vágatunnlin tunnel was built. In any case, it is still popular for its fantastic cliffs that can be visited by boat. You can see birds and caves and you are at the foot of vertical cliffs that take your breath away.

As you can see, many of the attractions of the Faroe Islands have to do with the sea and its coast and in this list we add Beinisvord, the coast of Risin, Kirkjuour or Lake Sorvágsvatn, the "lake on the ocean" or the enchanting seaside town of Gjógv. And I do not forget the beautiful Múlafossur waterfall, in the village of Gásadalur.

There is everything to see and do, always with a good coat, always with the camera in hand, always with an open heart to save and preserve the wonderful experiences that this visit will give us.