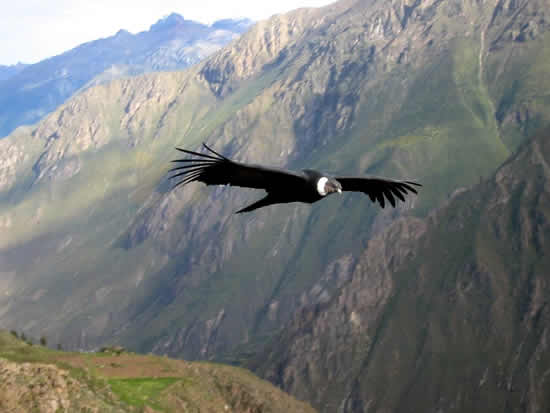 If we are going to travel to Colca ValleyWe must know that the differences in altitude and climate of the valley offer a highly differentiated vegetation, which includes more than 300 species.

Here we have the possibility to appreciate the ichu, a grass that grows at 3.500 meters above sea level, and which is consumed by South American camelids, and also used by the inhabitants to roof their homes.

We can also appreciate more than 20 species of cactusOne of its varieties is the prickly pear, which is used not only as a nutritious fruit, but also to dye wool.

El ayrampo It is a fruit of a small cactus, which is also used to dye textiles.

There have been terraces since pre-Hispanic times, in the lower areas 32 varieties of corn, 12 of beans, and 54 of quinoa are grown, while in the higher parts you can see ollucos and potatoes.

If it is about animal tourism, as we already mentioned you can see a series of camelids as well as cattle and sheep, especially at more than 3.500 meters above sea level. Among the camelids we must mention the guanaco, llama, vicuña and alpaca.

What most attracts the attention of tourists is the Condor de los Andes, a scavenger and flying bird, considered one of the largest in the world and its outstretched wings can measure 3 meters.

Condors nest in high and inaccessible areas, and they usually look for food, flying over long distances.

Other species that live in the Colca Valley are the kestrel, a bird with a beak and sharp claws; the peregrine falcon, considered one of the fastest birds in the world and the Andean partridge, which stands out for its cinnamon and white colors.