Switzerland it is a postcard country. Beautiful lake landscapes, picturesque villages, clean cities, educated citizens, good means of transport… If you already know Switzerland, you always want to return, if you have not had the pleasure yet, it is time to plan a trip to this small but charming country in Europe.

And here in Switzerland one of the recommended destinations is Grindelwald, a charming village in the canton of Bern.

As we said, the village is in the canton of Bern. Switzerland is divided into cantons, a total of 26, which make up the Swiss Confederation. These are administrative subdivisions and the word itself comes from a XNUMXth century French term.

In the case of the canton of Bern, it has been part of the confederation since 1353 and its capital is the city of the same name. The distance that it mediates between Bern and Grindelwald is around 75 kilometers, so in about an hour you can easily cover yourself by car. Obviously, there are buses and also train service. You can get there by train from Bern, they are services bound for Interlaken.

Grindelwald it is an old village, which appears for the first time in official documents in the XNUMXth century, but in reality the area was already occupied in Neolithic times, as evidenced by archaeological finds. The Romans also passed through here and in the Middle Ages the settlements took on a greater shape.

In the days of King Conrad III, in the XNUMXth century, land was given to the Interlaken Monastery and these properties grew during the following century. Religious power was great, despite local resistance from villagers and nobles. With the Protestant Reformation, the monastery and the village itself were secularized, but we are already talking about the XNUMXth century.

All this history can be seen in the different constructions that have managed to survive the passage of time and that tourism, which began in the XNUMXth century, learned to appreciate. The truth is that a beautiful village, very scenic, and the paintings, postcards and photographs that have portrayed it over time have contributed to its international fame.

The area has a total of seven municipalities, but the heart is the touristy Grindelwald. To this village mountains surround it, eleven in total, here and there, of different heights. There are forested lands and lands dedicated to agriculture, among which routes, roads, rivers and lakes are mixed.

Most people speak German, although the second most widely spoken language is Portuguese. Only later comes the French. How's the weather? Well June is a rainy month and the driest month is February. Obviously, winters are snowy and cold.

Like any mountain destination there are two very strong seasons: winter and summer. In winter the most important thing revolves around the ski. There are two ski areas, Kleine Scheidegg - Männlichen - Wengen and First. In total there are 160 kilometers of slopes with 30 facilities, at an altitude of 2500 meters. And even more, if we count that there is the Schilthorn with 2971 meters.

Besides skiing you can walk in winter with special equipment, and for that there is 80 kilometers of different paths. The roads go into the mountains giving spectacular views of the landscape from thousands of meters high, with glaciers in sight, or toboggan runs, 60 kilometers ... A marvel for those who want to spend the whole day under the frozen winter sky.

Then in summer it is advisable to go hiking. Equip yourself with good shoes and food and go out to enjoy the sun and the mountains. There are 300 kilometers of roads to hikersThe most popular among them is the one that connects Grindelwald - First to the Faulhorn mountain hotel, roasting by Lake Bachalpsee. Another recommended walk, if you like to see mountains, is to do the route from Männlichen to Kleine Scheidegg because you have a spectacular view of the Jungfrau, Mönch and Eiger mountains.

What not to miss in Grindelwald

Thinking of all that this mountain village and its surroundings have to offer, we can make a summary of the best of the best. Climb to the top of the Schwarzhorn It is advisable. A gondola takes you in Grindelwald itself and afterwards you can walk up the First Cliff Walk. It is a metal walkway attached to the mountain that projects 45 meters. Imagine those views! lakes in the distance, mountain peaks, alpine pastures ...

Then there is the First flyer It travels 800 meters long with an average speed of 84 km / h, but it is only for those who enjoy big shots of adrenaline. Everything is combined with walks and the use of trottibikes, a crossroads of scooter and bicycle.

Also from First you can approach know Lake Bachalpsee, at 2265 meters of altitude, with crystal clear waters, mirroring the surrounding lake landscape. The hike is light and there are lots of wildflowers if you go in the summer. And also going down in First you can take another path and go to Grosse Scheidegg, an ideal destination for excursions between pastures, cattle, waterfalls and glaciers.

Jungfraujoch requires taking the train at Grindelwald Grund towards Kleine Scheidegg. There you have to change trains and take the highest altitude train in the worldor that is the one that takes you to 3.454 meters of altitude. The train dates from 1912 And that is simply fantastic because already in the last seasons you are face to face with the Aletsch glacier. ¿Top of europe? Probably. And if you want to go up a little more you can go to the Sphinx Observatory where there are 360º views. 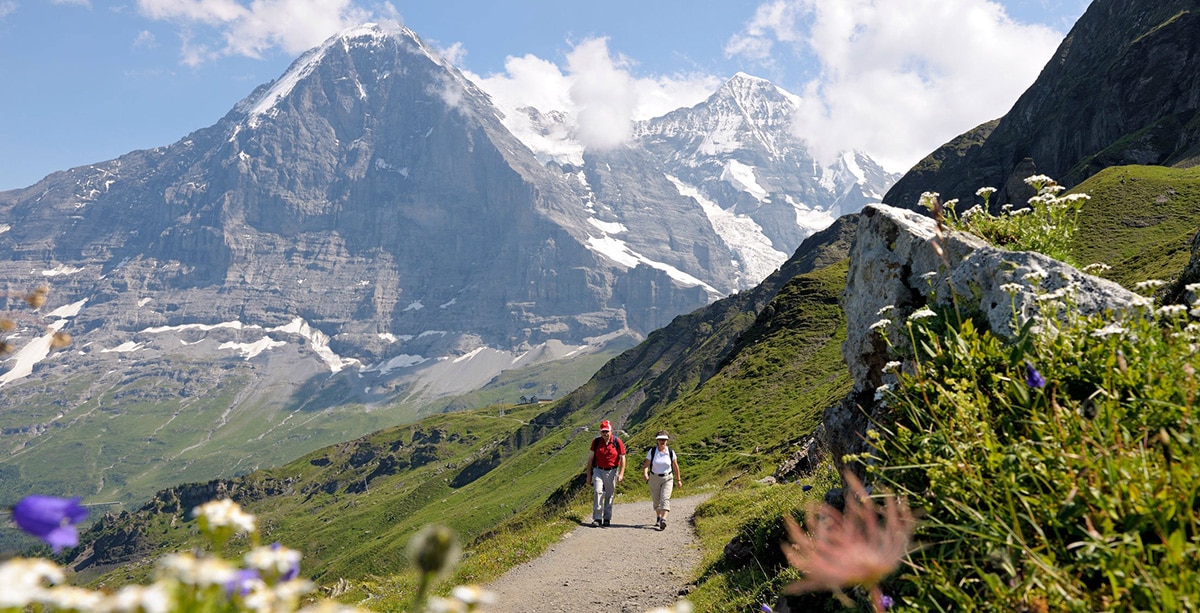 A Male It is reached by gondola from Grund station. The journey leaves you 1.300 meters and it is in itself an adventure since it is the third longest cableway of its kind in the world. In half an hour you are up to enjoy the landscapes. If you go in mid-June, flowers and greenery abound and once you are up the idea is to look for one of the many good vantage points.

To these destinations we can add Whitsun egg, especially in summer. It is just minutes from Grindelwald and has good views and a hilarious slide that is 736 meters long and a vertical drop of 60 meters. Any walk around here can take you to grindelwald glacier in 90 minutes of walking. Another outstanding hike is the Eiger Trail, six kilometers that take you to the north face of the Eiger.

To do this, you have to take the Jungfrau train to Eigergletscher and don't forget water, food, a hat and binoculars. The six kilometers start at Alpiglen station and you do it in about two hours. Sometimes it is a bit difficult but there are ropes to be taken from them by the side of the road.

To my glacier canyon It has to be on the list. It's about a ravine It is breathtaking and only 10 minutes from Grindelwald station. There are walkways and trails and in summer there is the spider web which is a network suspended over the water flow. The roads go one kilometer into the ravine.

And finally, if you don't want to walk and you're a bike fan, I'll tell you that Grindelwald's trains and cableways are adapted for cycling, so in summer the possibilities to wander and enjoy the area are expanded. Add the offer of spas and the Grindelwald Museum and the trip is complete.