Cala Macarella is one of the most beautiful beaches in the island of Menorca. Located in the southwest part, very close to the beautiful town of Citadel, the old capital of the island, every year it receives thousands of tourists who want to be photographed there.

As if the appeal of this small cove framed by limestone walls and almost virgin were not enough, next to it you have Cala Macarelleta, of even smaller dimensions and ideal for the practice of nudism. If you want to know more about Cala Macarella, we encourage you to continue reading.

The first thing we should point out to you regarding Cala Macarella is that it has a really idyllic aspect. Its white sands and turquoise blue waters will fascinate you. It is also a secluded place protected by small mountains of solid rock, as we told you, in which they have been formed caves that, since ancient times, have been used as a refuge to spend the weekend.

In its anterior part, you have a leafy Pine forest that reach the beach itself and an interesting landscape of dunes. Despite being a remote place, in summer the beach is crowded. There are very few travelers to the island of Menorca who do not visit it. Everyone wants, at least, to get to her to be photographed in such a wonderful place.

In addition, it has a fairly large beach bar where you can eat before returning to the beach. For all this, perhaps it would be better if you went to Cala Macarella in spring and early fall to enjoy it with more tranquility.

This beautiful cove also has several impressive underwater caves that you can visit while practicing the snorkel. To find them, you must swim out from the sandy area next to the cliff on the left. At about a hundred and fifty meters, you will find these cavities. They are the fruit of nature karst of the stone that makes up the side walls that frame the beach and are also above sea level, as we had explained before.

However, the sea floors of Cala Macarella are not particularly attractive. They are sandy and not very rich in flora and fauna. You will hardly see certain types of algae, some starfish and sponges and, with a bit of luck, a tapaculo (fish similar to sole) camouflaged in the sands at the bottom.

How to get to Cala Macarella

Another of the great attractions of this small beach has to do with how to get there. You can do it by road, but we are not talking about that, but about a beautiful hiking route: the Camí de Cavalls.

The path that surrounds the entire island of Menorca is known by this name since the Middle Ages, when the king Jaime II He promulgated a law that obliged Menorcans to have a horse to defend the island against pirate raids.

Currently, this beautiful route, which offers you wonderful landscapes, is rehabilitated and divided into stages. One of them, the one that unites the coves Turqueta and Galdana, passes through Cala Macarella. After an hour of hiking through forests and ravines that offer you breathtaking views, you will arrive at Macarella. A little earlier, if you turn right, you can also visit Cala Macarelleta. 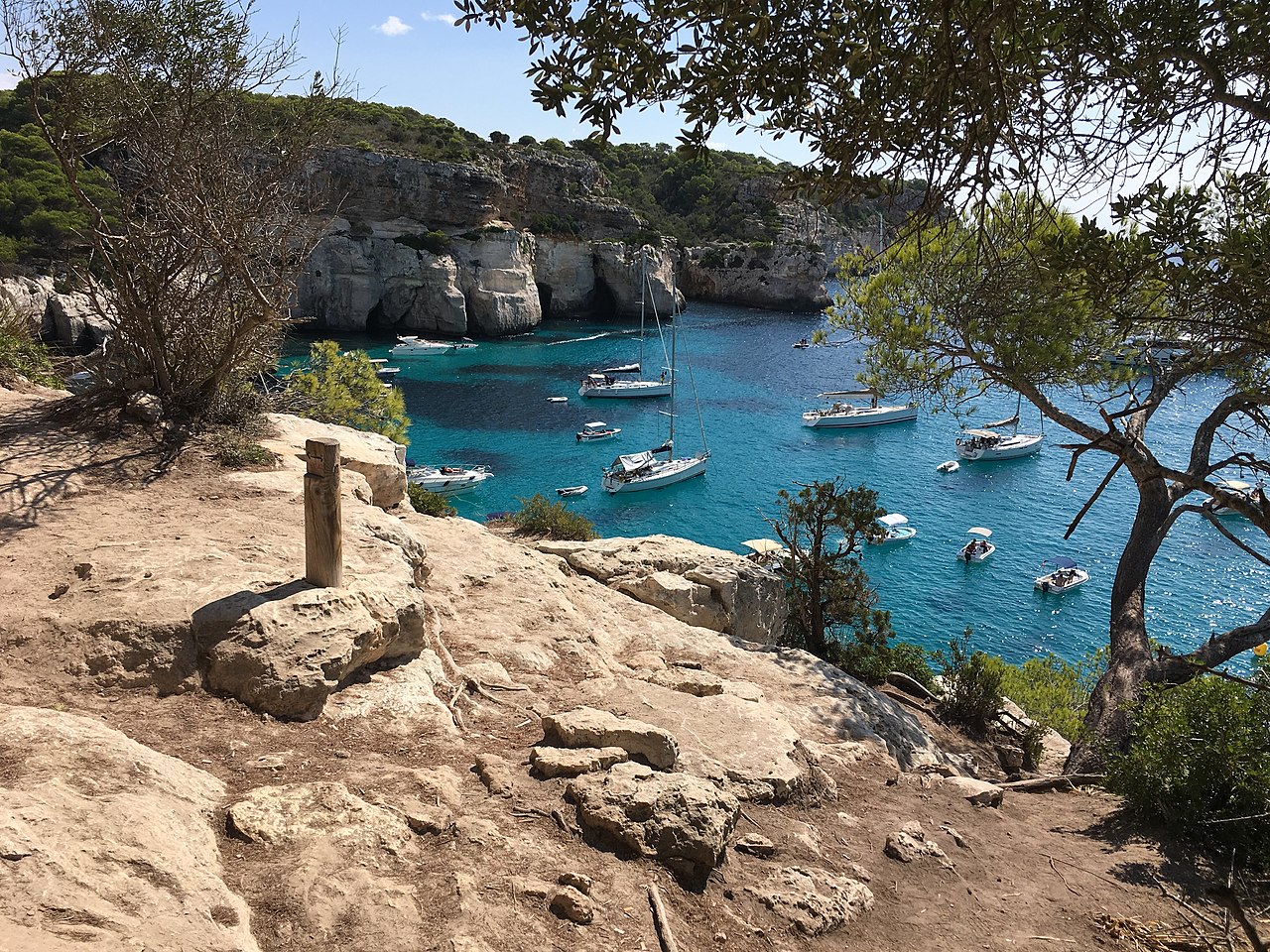 On the other hand, since you have taken the Camí de Cavalls and if you find yourself with strength, you can follow it to Cala Galdana, another wonder of Menorcan nature, passing through several viewpoints that offer you incomparable landscapes.

However, as we said, you can also get to Macarella by road. There are buses to this beach from Citadel. But, if you prefer to do it in your own car, you must take the road that leads to southern beaches, in direction to Saint John of Mass. After diverting to Cala TurquetaYou will arrive at a car park, which is paid and is about a fifteen minute walk from Macarella.

The surroundings of Cala Macarella

The perfect complement to your visit to this beach is the town of Citadel, without a doubt the most historic in Menorca. Not for nothing, it was its capital until 1714, when the English occupied it. Now the capital is Mahon, but the great monuments are in Ciudadela.

Perhaps the most beautiful thing in the town is its old town, formed by narrow streets with peculiar names (for example, «Que no pasa») and which converge on the Cathedral of Santa María. This is a beautiful Catalan Gothic style building built in the XNUMXth century in which the Chapel of Souls, made in the eighteenth following the canons of the Baroque.

In the very old town of Ciudadela you have other points of interest. For example, the Born square, where you will see an obelisk that commemorates the victory against the Turkish ships commanded by Admiral Pialí in 1558. You can also visit the convent of San Agustín, from the XNUMXth century and inside which you will find an interesting diocesan museum. This, in addition to religious goldsmithing, has pieces of the ancestral talayotic culture, developed in the Balearic islands in the Bronze and Iron ages.

Another attractive point of Ciudadela is the port, where you can see the curious phenomenon of rissaga. Under certain atmospheric conditions, the sea rises and falls until it overflows. You will be impressed to see how the ships move at the whim of the marine onslaught.

The promenade takes you to the castle of San Nicolás, built in the XNUMXth century to defend the town from enemy attacks. And other interesting buildings of Ciudadela sol el Palace of Torresaura, which responds to the Levantine Gothic and the Town hall, built on an old fortress.

On the other hand, on the road that goes from Ciudadela to Mahón, you will find this funeral construction that belongs precisely to the Talayotic culture what we have talked about. It is missing a stone in its upper part. And, if we have to heed the legend, this has a curious explanation.

Two giants were vying for the love of a girl. To decide who of them deserved to marry her, one promised to dig until he found water, while the other would build a stone ship. When the latter was taking the last to finish its construction, he heard how the other shouted that he had found the water. Then, the first, defeated and enraged, threw the stone that was leading to the hole, killing his rival. Frightened by it, he fled and neither of them married the girl.

In conclusion, Cala Macarella It is one of the most beautiful beaches in Minorca both for its white sands and turquoise blue waters and for its spectacular surroundings. Go ahead and visit it. You will not regret.