The world has many mysterious places, of those that little is known and much is presumed. Malta is one of them or, more specifically, the megalithic temples of Malta. Do you know them? Don't they intrigue you?

Malta is part of the European Union and although small it is a country where many many people live. Here, in this strange geography today much visited by tourists thanks to its warm climate, there are three World Heritage and many megalithic temples that are among the oldest and most mysterious in the world.

It's a independent state that is south of Italy and that although it has been at the mercy of different countries throughout its history, it is, since 1964, truly independent. It's a island state made up of three islands, Malta itself, Gozo and Comino. There are also other little islands.

Malta's climate is warm in summer and in winter it rains little. That is why many tourists go. For its beaches and obviously, for these megalithic temples that are super curious.

There are seven megalithic temples in Malta that UNESCO recognizes as World Heritage Sitess. They are in Malta and on the island of Gozo. In the first there are the temples of Hagar Qim, Mnajdra and Tarxien, Ta'Hagrat and Skorba while in Gozo there are the two huge temples of Ggantija.

All are monumental prehistoric structures believed to have been built during the fourth and third millennium BC They are among the first erected stone structures in the world and are striking for their shapes and decorations. The truth is that each complex is unique and a masterpiece for the technological achievement they represent.

Specialists say that each monument has a different technique, plan and articulation although there are some common traits like the elliptical patio in front and the concave facade. In general, the entrance is located in the front, in the middle of the façade, it opens onto a monumental passage with a paved courtyard and the interior is made up of semi-circular chambers symmetrically arranged on each side of the building's axis.

These chambers vary in number depending on the building, sometimes there are three chambers, sometimes four or five, and maybe six. There are horizontal stones and huge standing stonesIt is believed that there were roofs and everything suggests that the construction method reveals a lot of sophistication. The stone used is available locally, it is coral limestone for external walls and a softer limestone for interiors and decorative elements. Yes, there are some decorations inside the buildings and they also reveal a significant degree of craftsmanship. 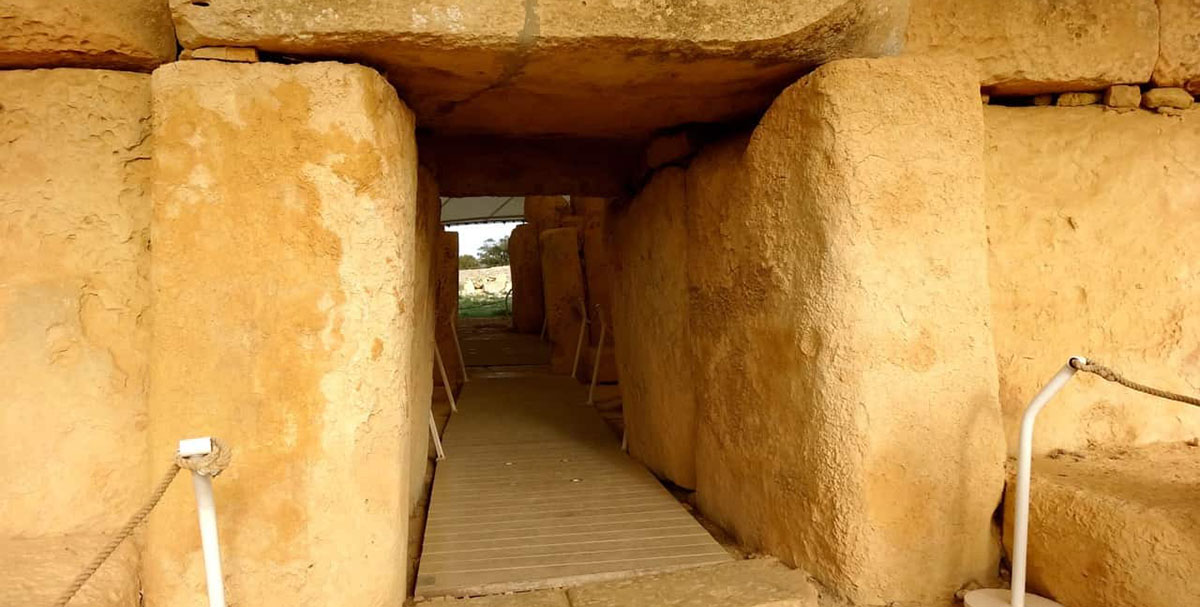 Of what Decorative elements We speak? Panels decorated with holes, spiral motifs, trees, plants and animals are not lacking. It is believed, from the architectural design and decorations, that these ancient buildings fulfilled some ritual role for the society that built them.

Almost all the information you will find about the megalithic temples of Malta comes from the orthodox archeology. This science, from the analysis of bones, ceramic fragments and different brands, has established that Humans lived in Malta since at least 5200 BC. They lived in caves but later they built houses and entire villages. It is believed that more or less after 1600 years of arrival on the island they began the construction of these enormous temples, of which today we only see something like their skeletons. 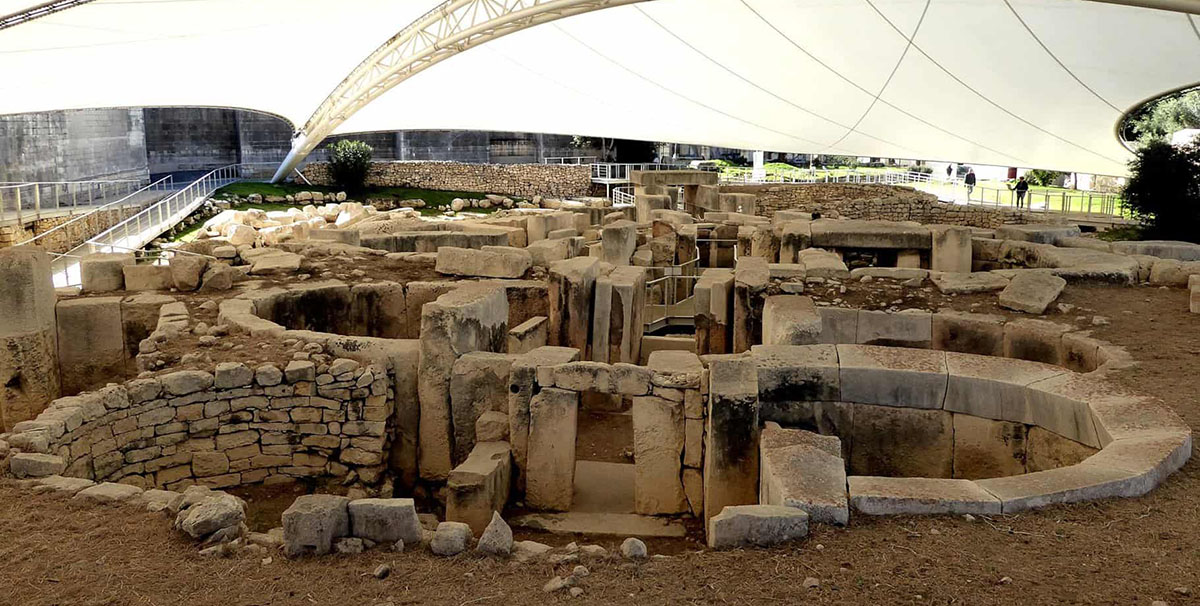 After a moment of glory and splendor it seems that Around 2300 BC this fantastic culture began to decline rapidly.and. Why? It is believed that due to extreme deforestation, loss of soil, greater population and use of resources for agriculture… There is also talk of famine, social conflict around oppressive religion or the arrival of external invaders. However, whatever happened, the culture of Malta declined and until the arrival of the people in the Bronze Age around 2000 BC. C the island was deserted.

Hagar Qim It means 'standing stones' and before the ruins came to light they were covered by a stone mound from which just a few standing rocks protruded at the top. The temple is believed to have been built in stages between 3500 BC and 2900 BC and it has the largest stones on the island. There is a massive rock seven meters by three meters and weighing about 20 tons.

The ruins were first explored in 1839 and more serious excavations were carried out between 1885 and 1910. In the case of lThe temples of Mnajdra are about 500 meters west of Hagar Qim, near the tip of the promontory overlooking the sea. The complex has two buildings, a main temple with two elliptical chambers and a small temple with another chamber.

Temples of astronomical observation? Can be. The main entrance faces east and on the autumn and spring equinoxes the first rays of the sun fall on a stone on a wall of the second chamber. In summer and winter the sun illuminates the corners of two pillars that are in the passage that connects the main chambers.

It really is wonderful since both temple complexes are astronomically aligned and not just once a day but several times: in Hagar Qim, for example, at dawn the sun's rays pass through what is known as the oracle and project the image of a disk that is roughly the same size as what It is seen from the moon and, as the minutes pass, the disk grows and becomes an ellipse. Another alignment occurs at sunset. 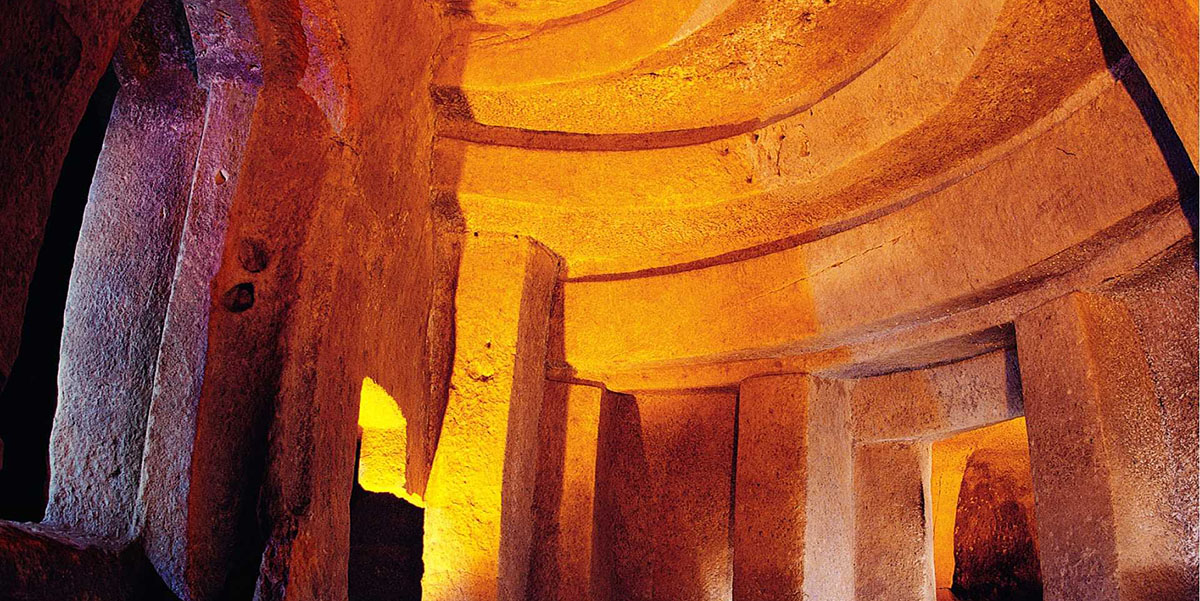 The truth is that these astronomical questions are super rare because if we believe in orthodox archeology at that time that knowledge…. There is a data that is wrong. Other researchers suggest other more interesting ideas: the culminating moment of the sun at the solstices is not fixed but varies with the angle, increasing or decreasing, of the Earth's axis in relation to the plane of its orbit around the sun. These changes are technically known as "the obliquity of the ellipsis" and it has a range of 23 degrees and 27 minutes.

Thus, a great cycle of more than 40 thousand years is revealed and if the alignments are old enough they will incorporate a degree of error caused precisely by this changing obliquity. From this error it is then possible to calculate the exact date of the construction of the temples.

Thus, in the case of the Mnajdra temples, their alignment is good but not very perfect. So the calculation suggests that the perfect alignment must have occurred at least twice in the last 15 years: once in 3700 BC and one earlier, in 10.205 BC. They are much older than what is said.

Very rare ... But what adds mystery is that beyond his relationship with the stars the megalithic temples of Malta reveal a great degree of mathematical and engineering sophistication. Did you know? Maybe not, because things to do with the stars, mathematics, and generally accomplished engineering are outside of orthodox archeology. Also, there is nothing in the world that looks like these temples so its very existence is enigmatic.

Finally, we cannot forget about the complex of Hal Saflieni temples, known as the Hypogeum. It has three underground levels 12 meters deep, a spiral staircase that descends and two chambers known as the Oracle and the Sancta Sanctorum. There are also the Tarxien temples, within which a colossal statue with an original height of two and a half meters, baptized as the Mother Goddess.

The Tas-Silg temples and Skorba Temples and the strange rails carved out of the floor found in various parts of Malta and merge into the sea. They look like wheel marks but surely they are not. And what are they? Well, another mystery.

And of course, if you want to know more about the suspicions, musings, suggestions, assumptions and more that there are around the megalithic temples of Malta there are many interesting books and websites. My first approach to this mystery was from the hand of a classic: Erich Von Daniken.