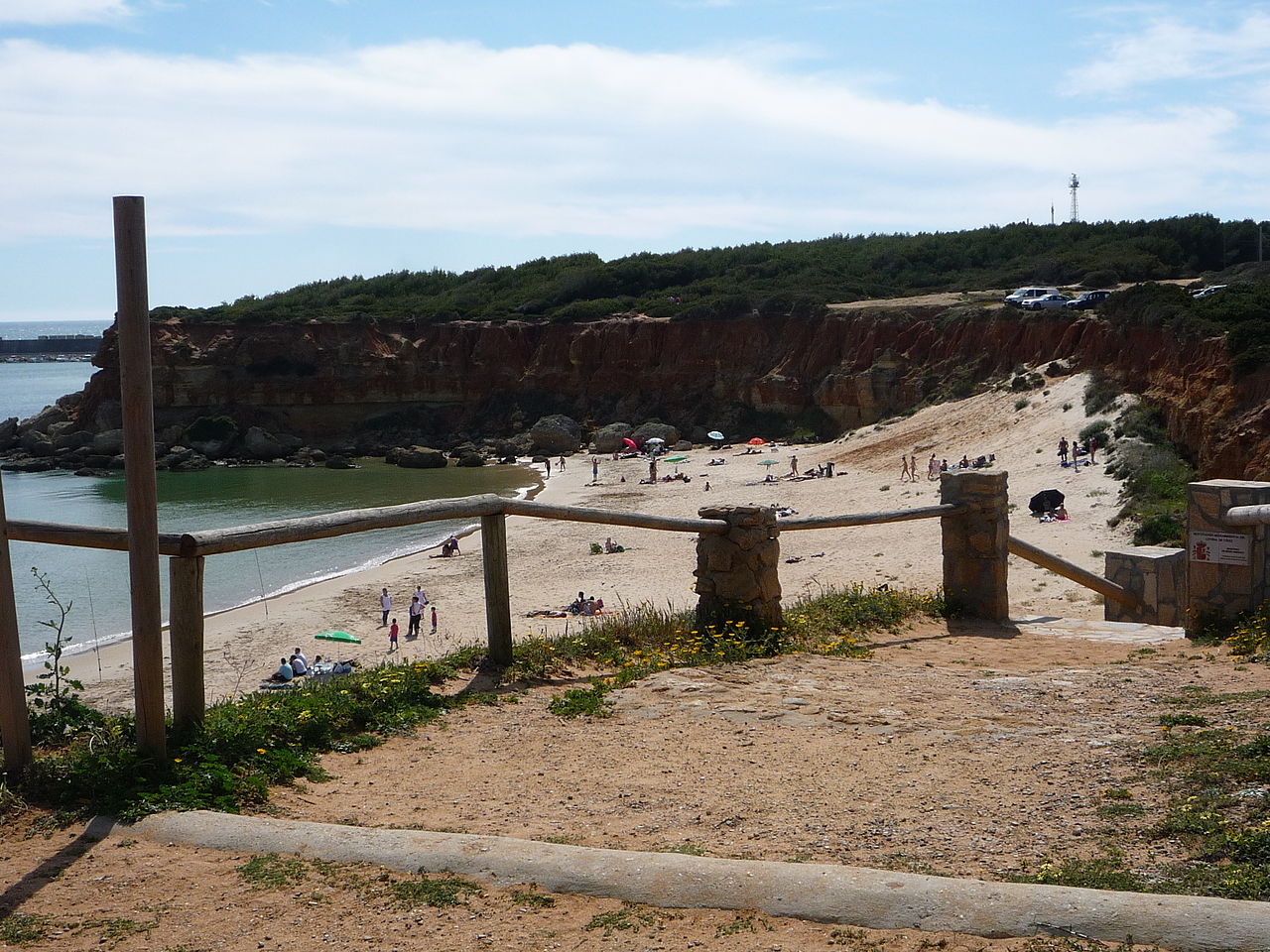 La Oil cove in Conil It is one of the beautiful beaches that this municipality in the province of Cadiz. It therefore belongs to the so-called Costa de la Luz, which encompasses the coastline of both the aforementioned province and of Huelva and that has great tourist strength.

Although it is not the largest beach in the area or the one with the best services, it is one of the most beautiful. However, you have a choice. Because the fourteen kilometers of beaches of the town of Cadiz include those of the batels, the Fontanilla, the chorrillo o Rooster Fountain. Also, you have other coves like those of the Roqueo or those of Roche. Next to the latter, there was also a beautiful pine forest that suffered a terrible fire in 2006. But, if you want to know more about Cala del Aceite in Conil, we encourage you to continue reading.

Where is it and how to get to Cala del Aceite?

This beautiful cove is located the outskirts of Conil de la Frontera, near the fishing port of the town. To get to it, you can take the CA-308 road, which leaves the police roundabout. After passing the campsite, take the second exit towards the port.

Once past a restaurant, you have to turn left and follow a dirt road. Then turn right and you will come to the creek car park. To descend to the sand there is a ramp and stairs. Therefore, you can reach the cove on foot by taking a short walk of just one kilometer. But you can also access by car. In addition, the entire route is perfectly indicated.

On the other hand, if you want to extend your walk and contemplate spectacular views of the Cadiz coast, you can take advantage of the so-called Calas de Conil Trail. It is one and a half kilometers long and joins the Roche lighthouse with the area where the urbanization of the same name is located. Along the way, you will get beautiful views of Cala del Aceite itself, but also of the Fuente del Gallo and even of Conil and the lighthouse of Trafalgar.

How is Cala del Aceite in Conil?

Sunset on the beaches of Conil de la Frontera

If you dare to get to know this cove, you will find a beautiful sandbank that is two hundred and fifty meters long and twenty-five meters wide. However, these dimensions can vary, logically, depending on the tides. but always has white sands and turquoise blue waters. These tones contrast with the reddish color of the cliffs that surround the beach and also with the vegetation green what about her

It is oriented to the south, where the Levante wind blows less. Therefore, this location, next to the cliffs themselves and their circular shape, they keep her protected. As it is not the most important sandy area in Conil de la Frontera, it has few services. But he has cleaning and surveillance. Even in summer, a beach bar opens where you can have a drink and eat. Another option is to go to the port, where there are several catering establishments.

Moreover, the occupation of the cove is medium. Yes, it is frequented, but it is not overcrowded, except in the months of July and August, when Conil receives more tourists. Its waters have a moderate swell. They are, therefore, calm and equally transparent waters. This makes them perfect for practice diving and also so that you bathe with your small children.

Finally, we recommend that you visit Cala del Aceite in Conil at sunset. The reddish color of the sunset is combined with the similar color of the cliffs and with the turquoise blue of the sea, creating a view full of beauty and romance. But, if you enjoy Cala del Aceite, you are also going to visit Conil. That's why we want to recommend you what to see in this beautiful Cadiz town.

What to see in Conil de la Frontera?

Torre de Guzmán, one of the symbols of Conil

Conil is a small town in the province of Cadiz which has about twenty-two thousand inhabitants in its entire municipal term, although in summer it can reach one hundred thousand. However, it is one of the towns more typical and with more charm of the Cadiz coast.

It has a spectacular historic helmet of white houses and patios adorned with flowers which is accessed through the Gate of the Villa. This was built in the early XNUMXth century and was one of four that ran through the old wall, of which not much remains. But on Calle Extramuros one of its corners is preserved.

Previous is the Guzman Tower, which was the tribute to the castle of Conil, now disappeared. It is from the XNUMXth century, although it has undergone several restorations. Currently, it is art exhibition venue and has a tourist information point. But, above all, you can go up to the roof and enjoy spectacular views of the Cadiz coast.

It also served as protection against pirate attacks. To avoid these, there were also two coastal towers that are preserved. are those of Castilnovo, bordering Vejer de la Frontera, and of the pig, on the border with Chiclana. Equally beautiful is fishing district, from which you can walk up to the mill square, so called because one is preserved in it. And, next to it, you will see a small boat that symbolizes the link between the town and the sea.

On the other hand, in Conil there are several stately mansions. Among others, you can see the house of the Count of the Five Towers. But other civil constructions are also interesting, such as the old prison and chapter houses, all from the XNUMXth century. Also, don't stop approaching the Spain Square, an emblematic place in the town and full of animation.

However, speaking of symbols of Conil, we have to do it the chanca. The town, along with others on the Cadiz coast such as Barbate or Tarifa, lived for a long time from the bluefin tuna fishing, to the point that it became a whole culture. La Chanca is a huge seven thousand five hundred square meter building built in the XNUMXth century where the fish was cut up and salted. Currently, already restored, it is used as a library, for exhibitions and as the headquarters, precisely, of the Tuna Museum.

In the fishing district is the hermitage of the Holy Spirit, built in the XNUMXth century, and in El Colorado is the Hermitage of Our Lady Mary Help of Christians. And we also recommend you visit the Victoria convent.

Very different character has the Major Church of Conil or Santa Catalina. Because this beautiful XNUMXth century Mudejar temple, rebuilt several times, now desecrated, has become a cultural center. In it, therefore, you can see exhibitions and other events. Precisely, in the Plaza de Santa Catalina you have the curious Municipal Museum of Roots of Conile, of an ethnographic nature and with more than nine hundred pieces that were used in the past by the inhabitants of the town.

What to see around Conil?

Once we have told you about Cala del Aceite in Conil and what to see in this beautiful town in Cadiz, we will suggest somewhere near her. At just sixteen kilometers you have Vejer de la Frontera, whose walled old quarter is artistic historical ensemble. Dominated by its imposing castle built in the XNUMXth century and declared a national monument, the town also has an interesting religious heritage.

Highlights in it the church of the Divine Savior, a Mudejar Gothic jewel built on an old mosque in the mid-XNUMXth century. Also worth your visit Hermitage of Our Lady of Olive, built in the XNUMXth century, which houses paintings by the Mexican painter John Strap.

On the other hand, about eighteen kilometers from Conil you have the town of Chiclana de la Frontera. It is another monumental wonder in which you have religious constructions such as the churches of San Juan Bautista (a jewel of Cadiz neoclassicism) and San Sebastián, the hermitages of Santa Ana and Vera Cruz or the convent of Jesús Nazareno.

As for its civil heritage, it is even more spectacular. stand out in it towers like the Clock, built in the XNUMXth century on one of the access arches to the town. It is located in the Plaza Mayor, the most important architectural space in Chiclana, since it also houses other monuments such as the church of San Juan Bautista, already mentioned. Finally, you can see in the villa stately palaces such as those of the Count of Torres and the Count of Pinar, both transitional between the Baroque and the Neoclassical.

In conclusion, we have explained everything you need to know about the Oil cove in Conil. But we also wanted to talk to you about what to see in that beautiful town in the province of Cádiz, as well as in other nearby towns such as Chiclana or Vejer. Don't you think they have enough attractions for you to visit them?