When it comes to food, Mexicans have a saying that says "full belly, happy heart." It does not matter if we eat in a luxurious restaurant, at the taco stand on the corner or at a friend's house, wherever and however it is, Mexicans know how to enjoy good traditional food. In fact, it is so tasty and so appreciated around the world that in November 2010 it was recognized by UNESCO as an Intangible Heritage of Humanity. And what is it that makes Mexican gastronomy so special? Well, that distinctive touch to the dishes. "The spicy" or "spicy" that Mexicans would say.

Next, we review the best of Mexican gastronomy and we delve into its kitchens.

It is one of the oldest since its origins date back 10.000 years, at the time when corn began to be cultivated to make it the food base of the Mesoamerican peoples. The indigenous communities that inhabited the territory had vegetables, chili and corn as their main diet, although these foods were joined by others of no less importance such as tomato, avocado, cactus, pumpkin, cocoa or vanilla.

On the occasion of the discovery of America, new ingredients were added to Mexican cuisine such as carrots, spinach, rice, wheat, oats, peas or different types of meat from animals from Europe such as pork.

That fusion gave rise to one of the richest gastronomies in the world that has spread its influence to many parts of the world. Today even Mexican cuisine is a reason for tourist travel through gastronomic tourism. Many travelers head to Mexico to get to know the authentic pozole, the cochinita pibil, the mole poblano, the enchiladas, the stuffed chiles, the kid or the hearty dogfish bread.

Chili peppers are part of everyday Mexican cuisine, making it a gastronomic adventure for foreigners, because they are surprised with the enormous variety of sauces and different variations that this ingredient gives to the dishes.

As for beans, for generations they have been used as a garnish at every meal. But the greatest exponent of Mexican gastronomy is, without a doubt, corn in its different versions: enchiladas, chilaquiles, tacos ... without this food nothing would be the same in Mexican cuisine. 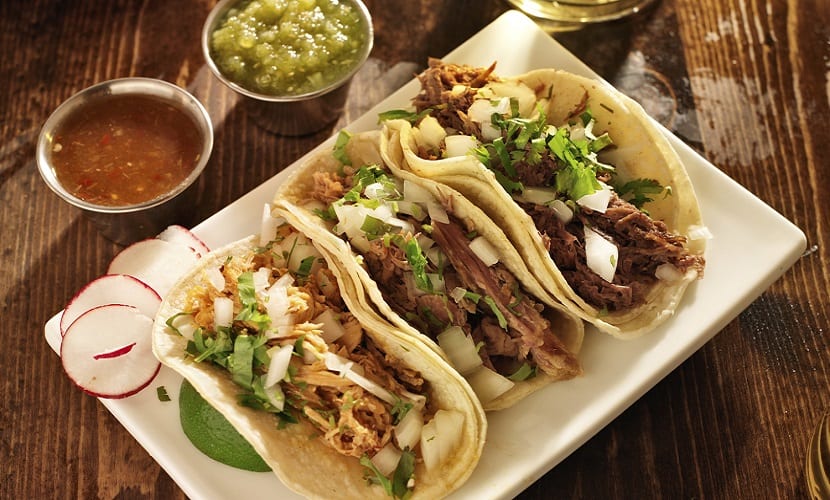 It is the most representative dish of the gastronomy of Mexico. It is based on a corn tortilla on which various fillings such as meats, sauces, dressings, etc. are poured. They are usually served folded on flat plates and their preparation will depend on the region of the country.

This is a spicy dish made from tortilla chips coated with chili sauce and combined with onion, cheese, chorizo ​​or chicken, among others. Chilaquiles are often the breakfast of many Mexicans.

It is a kind of soup made from corn grains to which pork or chicken is added. The ingredients that the pozole contains will depend a lot on the region in which it is cooked and can include lettuce, onion, cabbage, cheese, avocado, chili, oregano, etc. This dish is served in a bowl.

This is a typical Jalisco dish and is considered a saint's hand to combat hangovers. The foundation of the drowned cake is the birote (crusty, golden and baked bread) that is filled with meat and spread in hot chili sauce. Tomato sauce, garlic, cumin, onion or vinegar are also added.

Originally from the convents of the viceroyalty in Zamora (Hidalgo, Michoacán), chongos are a simple but delicious dessert made with cinnamon, curdled milk and sugar.

Formerly, this typical Mexican dessert was part of the indigenous diet and was used as a ceremonial dessert and for barter. It is made with amaranth seeds, raisins and honey.

They are also very typical of Mexican cuisine and are prepared with sugar, chopped peanuts, water, margarine and vegetable oil.

Tequila, the quintessential drink in Mexico

One of the most important aspects of Mexican culture is its gastronomy and within that wide world of textures, colors and flavors, its delicious drinks. There are alcoholic, sweet, refreshing, spicy and without a hint of alcohol. Ultimately, the variety is as great as the country itself.

It is the most internationally famous drink in Mexico and has become one of the great ambassadors of Mexican culture.

It began to be produced in the middle of the seventeenth century and its production process is as curious as its flavor. Tequila is obtained from fermentation with yeast and distillation of blue agave juices, which are later deposited in wooden barrels.

Currently there are around 160 brands and 12 farms that produce it, giving life to one of the most demanded Mexican products abroad. Which has the prestigious denomination of origin label. In addition, the agave landscape of Jalisco was declared a World Heritage Site and thanks to this the Tequila Route was promoted through different localities that produce it., which have museums on the history of this drink, its evolution and production.

Michelada is a very Mexican way to enjoy an ice cold beer with a pinch of salt, tabasco, lemon and other ingredients that together taste delicious. In Latin America, michelada is a very popular drink and is usually prepared with local beer.

The hot climate in some areas of the country has made fresh waters the most popular non-alcoholic beverages. They are made from fruit seeds and sugar to sweeten. The most famous are those prepared from chia, hibiscus, tamarind and horchata.

While chia is a native seed, the other fruits come from other parts of the world such as Africa, India and Spain. However, the way to prepare and serve these fresh waters (in huge glass glasses) is something typical and traditional in Mexico.