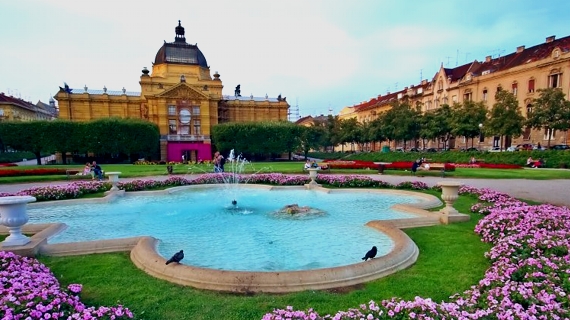 The layout of the downtown area of Zagreb it is drawn by a valley in the shape of a 'U' formed by its two main hills. This special natural route has favored the development of numerous green spaces, such as the parks that surrounded the lavish palaces from the time of the Austro-Hungarian Empire. Currently the set of parks that are located on this valley are known as the 'Green Horseshoe'.

Among the most interesting Herradura Verde park to know is the Maksimir, located on the east side of Zagreb. The maksimir extends over an area of ​​18 hectares, and highlights its pedestrian walkway that runs through a wide area of ​​meadows and gardens covered with flowers and ornamental shrubs. In this park its sculptures and historical buildings stand out, such as the Swiss House, the Porter's Cabin or the Eco Pavilion.

In La Herradura Verde there is also the Zagreb Botanical Garden, a park of almost 5 hectares that gathers around ten thousand species of native plants and from all over the world. Also part of this green corridor, in the Kaptol district, are: the Ribnjak park, an English-style park, crossed by waterfalls along the perimeter of the old city walls and also the Opatovina park, which houses real numerous historical monuments, considered true jewels of the Croatian capital.