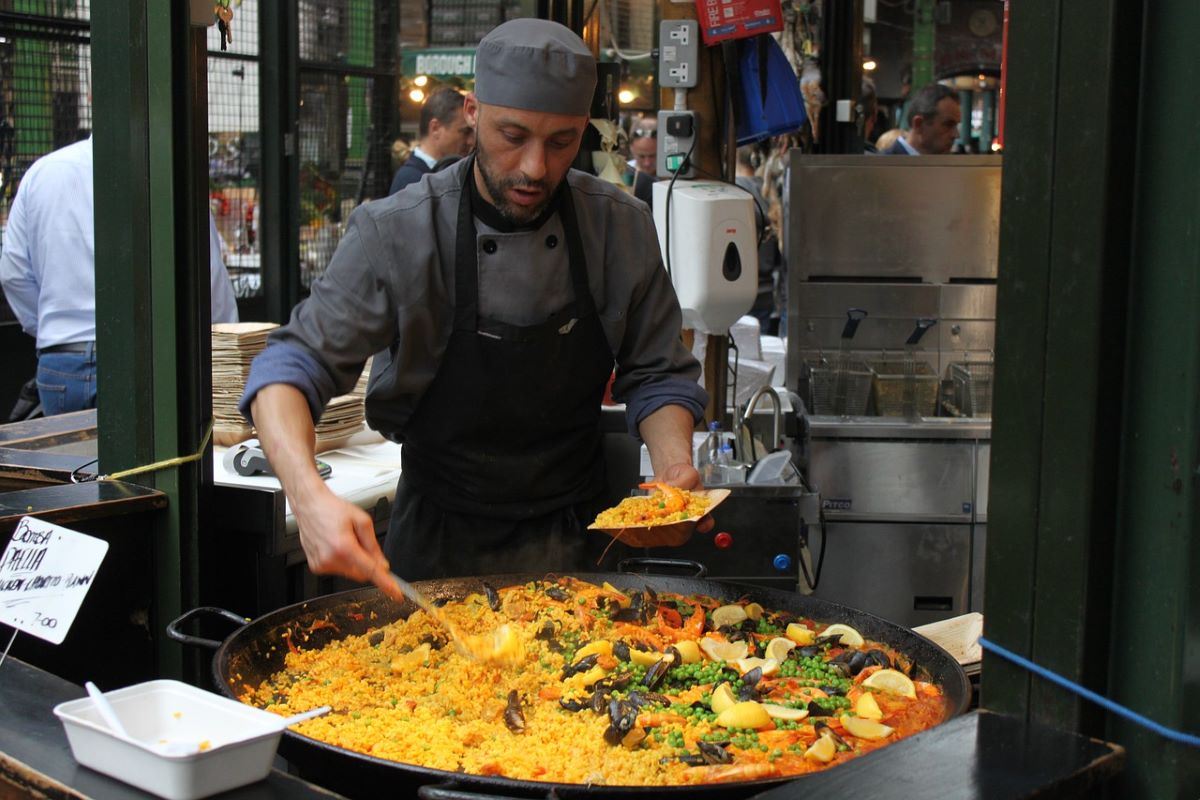 The traditional food of Spain is extensive, varied and very tasty. It consists mainly of contributions from the different regions of the country and of excellent quality raw materials that are grown locally. From popular modern tapas to delicious traditional roasts and stew dishes, Spanish cuisine tries to make the most of the best local produce.

While Italian or French gastronomy has been the center of attention for years, Spanish has remained in the background, waiting for its moment to be discovered by the international public. The Michelin stars that Spanish chefs have earned in recent years show a change in trend and more and more people are interested in discovering the secrets of traditional Spanish food. If you are one of them, we invite you to join us on this gastronomic tour of all the corners of this country that is here to be eaten..

Ingredients of traditional food from Spain

Because Spain has very different geographical regions with different climates, regional cuisines and their ingredients are diverse. However, the following are the most common and appreciated by the Spanish: 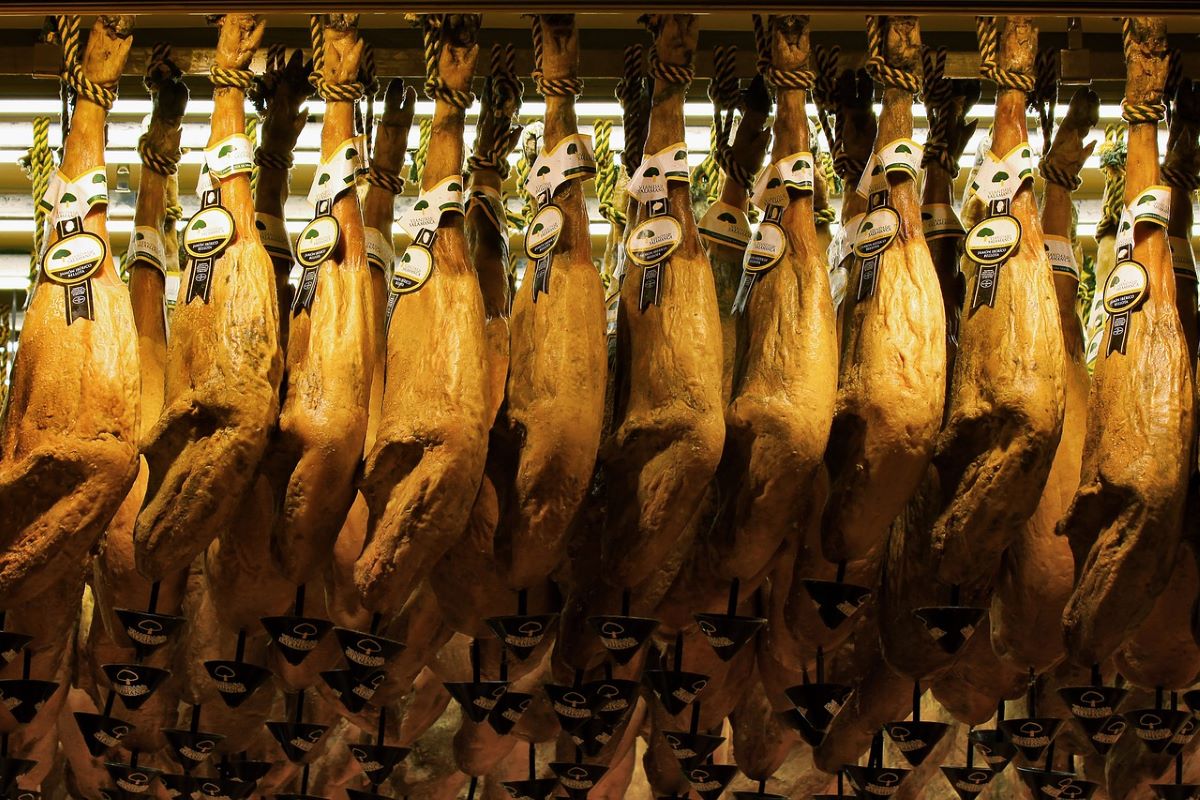 Iberian ham: it is the most recognized and valued product inside and outside our borders. It is obtained from the cured meat of Iberian pigs. Pata negra refers only to 100% acorn-fed ham, which is considered to be of the highest quality.

Extra virgin olive oil: it is the essential ingredient of the traditional cuisine of Spain. This liquid gold cannot be missing in any Spanish kitchen.

Paprika: This seasoning with an intense flavor is one of the staples of Spanish cuisine and is widely used in the preparation of cold cuts, sobrasadas and chorizo. Its use is key to enjoying a delicious Galician octopus, in patatas bravas or to prepare old clothes with leftovers from the stew. It is also very common to add a little to stews to give them some extra color, flavor and spice.

The wine: another essential element of our kitchen. Vineyards are grown in the 17 Autonomous Communities into which the country is divided. The climatic differences and the variety of soils make Spain a privileged place for the production of very different wines. Some of the most internationally known wine regions are Rioja, Ribera del Duero, Marco de Jerez, Rías Baixas, Penedés and Priorat. 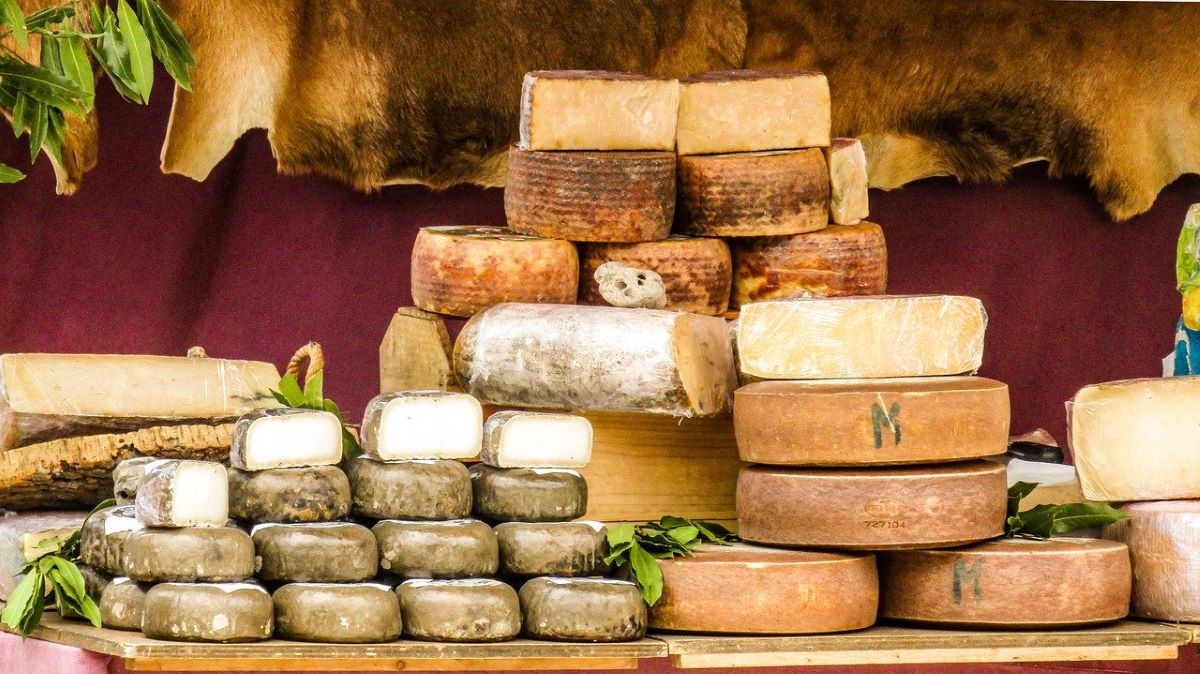 The cheese: in Spain a wide variety of cow, sheep or goat cheeses are made, from fresh to cured, protected by Protected Designations of Origin. In total there are 26 cheeses with DO being some of the most outstanding the Cabrales cheese, the Idiazábal cheese, the Mahón-Menorca cheese, the Manchego cheese, the Murcia cheese, the Tetilla cheese or the Torta del Casar cheese, among many others.

Seafood: the best seafood in Europe is caught on the coasts bordering the Iberian Peninsula. Prawns, crayfish, lobsters, barnacles ... whether grilled, in stews and even raw in Spain, they are eaten especially on festivities such as Christmas or New Year's Eve, but also during most of the year.

The citrus: Nranjas, mandarins, lemons ... Spain is the world leader in the export of citrus fruits and is a fundamental ingredient in the traditional cuisine of Spain. Ideal as a dessert, they are also used to make juices, in cocktails and cooking, both in salads and in sweet and savory recipes.

The meats: Beef, lamb, and pork are the three most common types in traditional Spanish cuisine and can be grilled, sautéed in a sauce, or roasted over hot coals. Chicken is also very popular and is prepared fried, stewed, and roasted.

Legumes: Beans and chickpeas have been a staple of peninsular cuisine for centuries and two of the most famous dishes are the Madrid stew and the Asturian fabada.

Herbs and spices: garlic, onion and herbs such as oregano, rosemary and thyme are used.

Top 10 dishes of the traditional cuisine of Spain 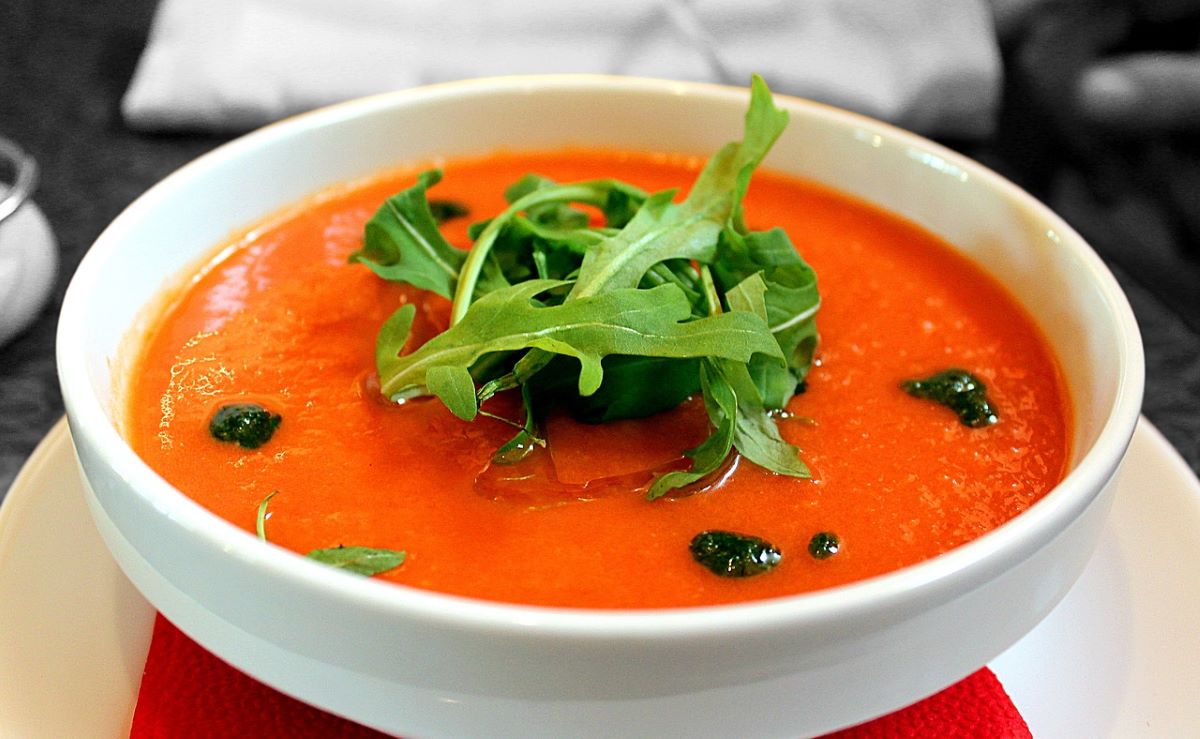 Andalusian gazpacho is the dish most demanded by people who visit our country in summer. This cold soup is a treasure of our gastronomy, for the quality of our tomatoes and peppers and for the olive oil.

It is one of our most beloved dishes that is cooked throughout the country in multiple versions: more or less curd, with or without onion ... Although today its origin is still uncertain, the theory that the recipe was born in Extremadura throughout the XNUMXth century is considered valid and resulted in a dish so universal and valued by everyone who tries it.

Valencia paella is probably the most representative dish of the traditional cuisine of Spain worldwide. It is cooked in many homes on the weekend and on major holidays. It is a rice dish made basically with meat, saffron, legumes and vegetables that is cooked in broth until it is dry.

It is a stew made with chickpeas and various vegetables and meats very typical of Madrid that is usually eaten in the winter months. The classic way of serving it is in three services known as dumps: the first service is the broth, the second the chickpeas with vegetables and potatoes and the third contains the meats. It is a strong dish that invites you to take a nap afterwards.

It is the most universal dish of Asturian cuisine and one of the most valued in Spanish gastronomy. The beans are the main ingredient and are accompanied by the famous compango (chorizo, blood sausage and bacon). It is a very energetic dish and is served on individual plates or in casseroles. A good cider or a good wine are the perfect complement to this traditional meal. 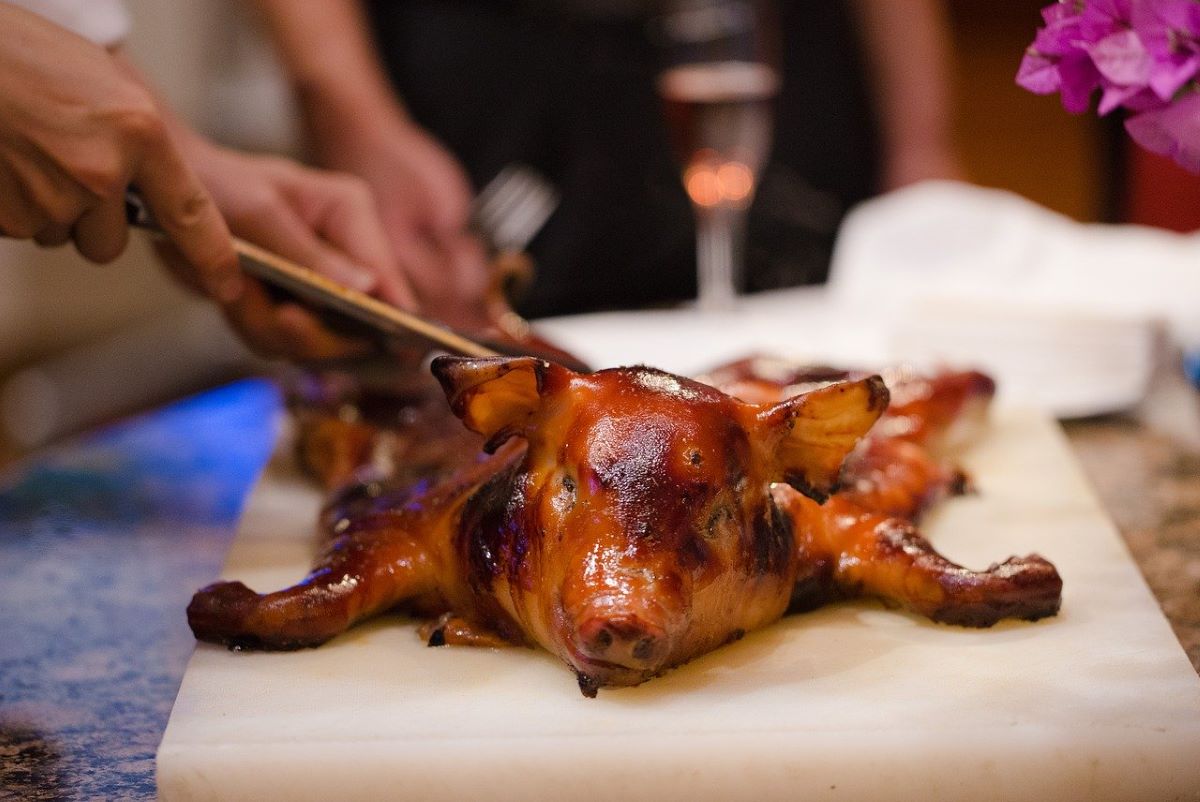 It is one of the most traditional and famous asados ​​in Castilla, especially in Segovia and Ávila. It is characterized by mixing the crunchy and toasted texture of the suckling pig skin with its juicy meat, which is the delight of any diner. In Spain it is typical to take it at Christmas.

This dish of the traditional cuisine of Spain can be enjoyed both as an aperitif, as a main dish or as a side dish. It is a portion of fried dough based on bechamel and pieces of ham, chicken or fish coated in egg and breadcrumbs. The most modern chefs also make them from cheese, prawns, jerky, spinach with raisins, etc.

The octopus at feira

It is one of the most typical dishes of Galician gastronomy. It is served hot with potatoes, coarse salt, sprinkled paprika that can be sweet or spicy and drizzled with a little oil on a wooden plate. The best accompaniment is a glass of good wine.

It is a stew of oxtail or bull typical of Cordovan cuisine that was already one of the most popular dishes during Ancient Rome. This delicious meat is accompanied by onion, red wine, fried tomato or spices such as black pepper, sweet paprika and cloves.

This recipe is one of the jewels of Basque gastronomy. This fish is accompanied by an emulsion of garlic, oil and chilli that gives rise to the tasty cod al pil pil.