Talking about Mexican food is, first of all, talking about a gastronomy classified as Intangible Cultural Heritage of Humanity by UNESCO. This circumstance will give you an idea of ​​the importance and richness of Mexico in terms of its dishes and why we bring you this selection of 7 typical Mexican dishes that you cannot miss.

In fact, we are facing one of the most varied cuisines in the world, both in terms of its ingredients and in terms of the diversity of its dishes. We could say that each state and even each city has its own kitchen. However, we are going to talk to you about the typical food of Mexico in a general sense, that is, of those recipes common to the whole country.

Typical food of Mexico: A bit of history

Current Mexican gastronomy is the result of the synthesis of the pre-Columbian substrate and the Spanish legacy. African, Asian, Middle Eastern and even French influences have been added to this. From the pre-Hispanic world it has taken many of its ingredients. For example, corn, chili, beans, tomatoes, avocados and numerous spices such as the papalo, the epazote or the holy leaf.

But all of them were joined by those from Europe such as wheat, rice, coffee and also aromatic herbs like bay leaf, cumin, oregano, spearmint or coriander. They even came with the Spanish meats such as pork or chicken y fruits such as orange, lemon or banana.

As we told you, the result of all this is a cuisine marked by the diversity between the different states that make up the Aztec country. It is not the same to talk about the gastronomy of Baja California than to do it about Chiapas itself. But all the typical food of Mexico has a common base. We could say that all of it is based on ingredients like corn, chili and beans, as well as in certain culinary techniques that match.

Seven dishes that make up the typical food of Mexico

The enormous variety of recipes that make up Mexican cuisine makes it impossible for us to summarize them in one article. Therefore, we are going to focus on seven typical dishes that you can find in any area of ​​the country, from Sonora but also Veracruz (we let you here a guide to this city) and from Jalisco but also Quintana Roo. Therefore, we are going to present you our gastronomic proposal from Mexico.

Maybe they are the plate more popular of Mexico, to the point that they have transcended its borders and today can be found anywhere in the world. They are so important in the country's cuisine that its population has created phrases with them. For example, "throwing a taco" is synonymous with going to eat or "in the absence of love, some tacos al pastor."

Interestingly, your recipe couldn't be easier to prepare. Is about corn or wheat flour tortillas within which an ingredient is put. And precisely here lies the value of tacos because, depending on what they have inside, they give rise to a huge variety of dishes and receive different names. But two of the most popular are:

Burritos, classics among the typical food of Mexico

Although other recipes can be considered, they are still stuffed tacos of different products. Usually they are made of different types of meat, peppers, onions and chili. In addition, they are usually accompanied by refried beans and other garnishes.

We can tell you the same about the quesadillas. They are also corn cakes, although their peculiarity is that the cheese is part of their filling. However, if you dare to try something more original, ask for one that, in addition to the traditional ingredients, carries pumpkin flower.

The mole, another classic among the typical food of Mexico

However, nowadays, a more specific type of sauce is called mole that belongs by right to the typical food of Mexico. It is the one that is also made with chili peppers and other spices, but it has a chocolatey look. By extension, it is also called meat or vegetable stews made with this sauce.

Although each state has its own recipe, the most appreciated within Mexico is the Mole Poblano. So popular has it become that, every year, it is celebrated in Puebla un an international festival dedicated to this sauce. It is made with various types of chili peppers, tomato, onion, garlic, dark chocolate and spices. If you try it, you won't be disappointed.

Pibil is a Mayan term that was used to refer to any food prepared in a earth oven. This was known as gdp and that's where the name of this dish comes from. Originally, it was popular in the Yucatan peninsula, a precious land where you can visit what we recommend in this article. But it has spread to all of Mexico and even the entire world.

Consists in pork marinated in achiote, a spice that was also used in pre-Columbian times. Then it is placed in an earth oven or similar accompanied by red onion, habanero pepper and sour orange. All this is wrapped in banana leaves to prevent it from drying out and is left to cook overnight.

Logically, this dish is no longer made in such a traditional way, but it is still just as delicious. For the sauce, not only achiote intervenes, oregano, cumin, olive oil, vinegar and the sour orange juice itself are also added.

We include this dish among the typical food of Mexico because it is part of it, but we warn you that, perhaps, you do not want to try it. The reason is very simple. The escamoles are pebble ant larvae that are eaten in the Aztec country since pre-Columbian times. If we tell you that they are also called "The caviar of Mexico", you can get an idea of ​​how appreciated they are. They are usually eaten fried and accompanied by eggs and spices such as epazote.

For its part, we could tell you the same about grasshoppers. Is about small grasshopper They are also eaten fried, even as an aperitif or in tacos and quesadillas. In any case, both are recommended for daring palates. 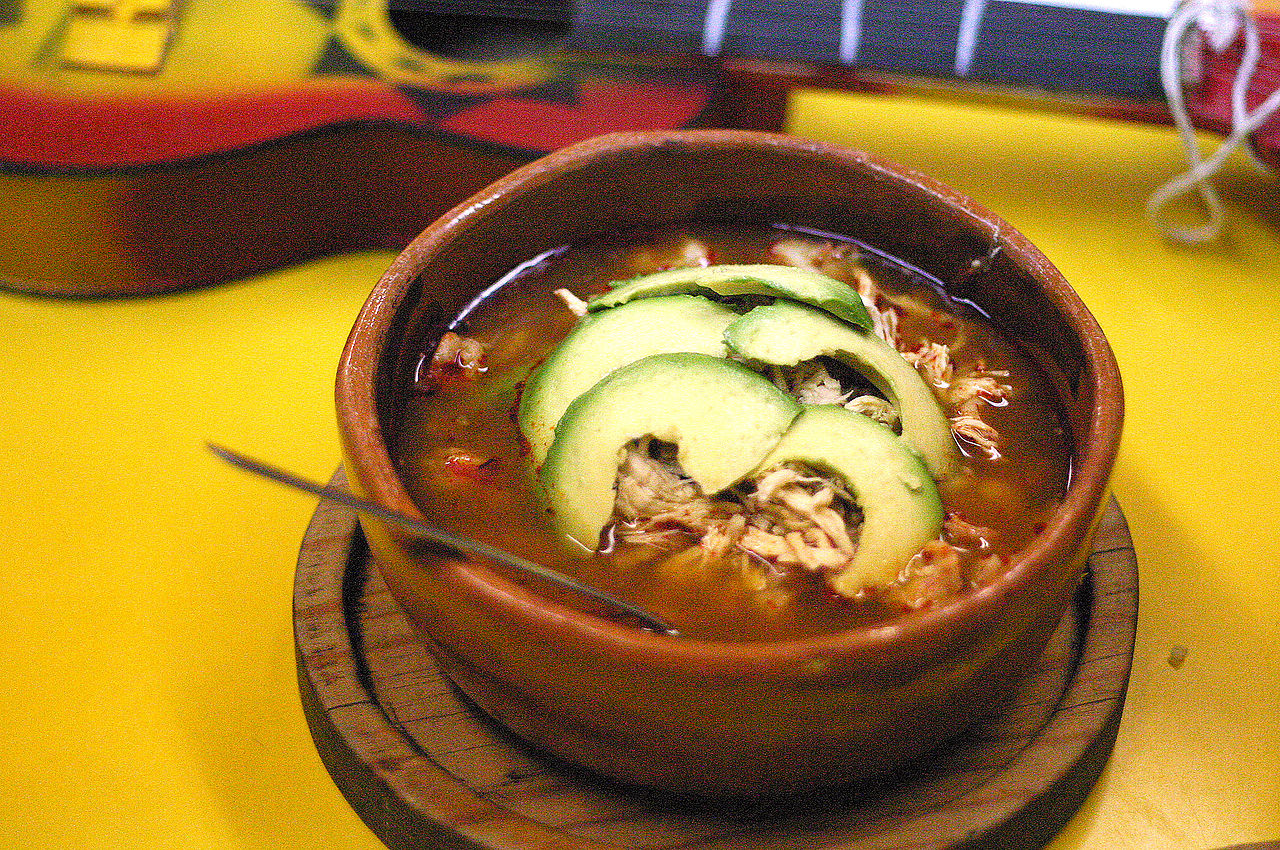 This forceful soup It includes, in addition to the broth, cacahuazintle corn grains, chicken or pork meat and many other ingredients. Among these, for example, onion, lettuce, cabbage, radish, avocado, cheese or pork rinds.

And it is that you can find yourself many types of pozole. However, they all fall into two categories: white, easier because it only has corn and meat and the spicy, more elaborate and that can have a very spicy flavor.

We must also look for its origin in pre-Hispanic times. In fact, its name comes from Nahuatl tlapozonalli, which means "boiled" or "sparkling", although other theories suggest that it owes its name to posoli, a term from the Cahita language that can be translated as "cooking corn."

The desserts: the bean candy

We cannot finish our tour of typical Mexican food without talking about desserts. Some coincide with those we know in our country. Not in vain, we already said that Mexican cuisine has a strong Hispanic component. It is the case of Churros, rice pudding, fritters or jericallas, similar to our custard.

However, other desserts are genuinely indigenous. One of them is the bean candy, a product so present in the gastronomy of the Aztec country. It is made with milk, egg yolks, cinnamon, sugar, crushed almonds, walnuts and cornstarch, in addition, of course, from the beans cooked without salt.

But they are also very popular levers, a kind of cake that is prepared with water, honey, unsalted peanuts and butter. We can tell you the same about black sapote, whose base is the fruit of the so-called tree and which is accompanied by eggs, cinnamon and sugar among other ingredients. Its flavor is very curious, surprisingly similar to that of chocolate. Finally, we recommend the cornbread or fresh corn on the cob. To sweeten it, it has condensed milk and cinnamon along with other ingredients such as eggs, butter and flour. Simply delicious.

In conclusion, we have told you about seven dishes that make up the highlight of the food typical of Mexico. However, we could have included others such as lime soup, the populars Tamales, tortilla chips or marquestes. Go ahead and try them!

Full path to article: Travel News » America » Mexico » 7 typical dishes of Mexico that you must try