The typical food of Veracruz has an important base of sea ​​products. Not in vain, this region is located in the Gulf of Mexico and, not only has many kilometers of coastline, but also the city that gives it its name has the most important port in the country.

Veracruz was also the first town that the Spanish founded in Mexico. Therefore, the Hispanic component it is very present in its gastronomy. This is combined with the pre-Columbian Mesoamerican tradition and with elements of african and caribbean cuisine to give rise to a gastronomy as forceful as it is delicious in terms of flavors. If you want to know more about the typical foods of Veracruz, we encourage you to continue reading.

The typical food of Veracruz: A bit of history

Everything that we have told you regarding Veracruz gastronomy is enriched, in turn, with the products grown in the state's lands, very fertile and of great biodiversity thanks to the tropical and subtropical climates that it has.

But the first thing we want to tell you is a little history of the typical food of Veracruz. The Spanish brought many products from their diet. Among them, beans, rice, wheat and lemon. But also meats like that of the pig or that of the chicken and jewels like him olive oil and it.

Once established in Veracruz lands, the new settlers began to grow other products, some already traditional in the pre-Columbian diet, while others were less popular. Among them were the corn, coffee and fruits like pineapple, coconut, sapote, mango, guava or orange.

Already in the XNUMXth century, new immigrants arrived from different parts of the world who enriched the gastronomy of Veracruz with traditions Arabs, caribbean and coming from European countries. All of this has resulted in three variants cuisine within the typical of this Mexican state. Let's see them.

Typical food of Veracruz: The most popular dishes

As we told you, the typical food of Veracruz has an important base of seafood, but also includes delicious sauces made with local products. We are going to show you some of these dishes.

This dish precisely combines both things: the fruits of the sea and those of the land of Veracruz. It can be made with any fish in the area, from dogfish to cabrilla through snook, tilapia and basal. However, the most used is the red snapper, known in the region as red snapper, a very tasty reef fish.

However, the secret of this typical recipe is in the sauce, which, curiously, is one of the few made in Mexico that not itchy. Its ingredients are olive oil, bay leaf, salt and pepper, onion, tomato, parsley, garlic, oregano, olives and capers.

Its preparation is quite simple, because, once the sauce is obtained, it is made together with the fish in the oven. Precisely to give it a spicy touch, it can be added cuaresmeño chili and served with white rice or potatoes. Without a doubt, a gastronomic wonder.

Arroz a la tumbada, another delicacy of the typical food of Veracruz

Arroz a la tumbada, one of the staples in the typical food of Veracruz

We could say that it is the equivalent of our seafood paella, although it has its peculiarities. Its ingredients, in addition to rice, are shrimp, crabs, clams and other sea products to which a stir fried made with garlic, onion, tomato and red pepper. Finally, its flavor is enhanced with parsley leaves, oregano, coriander and epazote.

It seems that the origins of this dish we must look for in the diet of the fishermen who, in the XNUMXth century, did their work on the coasts of Veracruz. And, as a curiosity, we will tell you that it is called «to the lying down» to indicate that it is prepared soupy.

Very popular in the center of the region, they are nothing other than corn tortillas with salsa on top and garnished with ranchero cheese and onion. They receive the name of pinched, precisely, because the edges of the cake are pinched so that the sauce does not fall.

They look like sopes They are made in the rest of the country and, if you want to have something typical to eat in Veracruz, we recommend them because they are delicious. However, the natives of the region usually take them as breakfast.

El Tamale It is very popular, not only in Veracruz, but also throughout Mexico. As you know, it is cooked corn wrapped in its own leaf. However, zacahuil is the result of Huasteca cuisine, as we have already told you.

It is precisely a giant tamale, perhaps the largest you can find in the whole country. But it has more history. The corn dough is prepared in this recipe just as the natives did hundreds of years ago. Thus, it gives rise to a mass called nixtamal which has the grains less ground and a more cracked appearance.

This dough is filled with lard, chili peppers and pork or turkey meat, among other ingredients. The latter is a large bird native to America that has a turkey-like appearance.

The typical food of Veracruz also includes soups very tasty and filling. It is the case of chilpachole, whose origins are attributed to French cuisine. Because it is not about anything other than one seafood soup Made with fish and crab (a typical blue crab from the Veracruz coasts).

However, chilpachole is much stronger than the traditional seafood broth. For starters, it is given consistency with corn dough. And, in addition, it has onion, dried chili, tomato, garlic and epazote. All these ingredients give it a texture similar to atole, a drink of pre-Hispanic origin that we have already mentioned, although this is traditionally sweet.

Lighter is the Izote flower broth. Its base is this native plant of Central America and it also usually carries shrimp, chives, tomato, epazote and pipian ears. In turn, these are a pasta made with pumpkin seeds that is also used for other dishes.

Banana mogo, another delicacy of the typical food of Veracruz

Among all the typical dishes of Veracruz, this is probably one of the most obvious African roots. Because, also called machucoIt is nothing else mashed green bananas.

To make it, these with their skin are cooked in boiling water. When their coating bursts, they are removed and butter and salt are added to crush them until they have the right texture. But this dish is not ready yet. The puree is allowed to cool in the fridge to harden and then deep-fry. Usually, it will be served as a side to the beans.

If the dishes that we have mentioned so far are delicious, Veracruz pastries are not far behind. Almost all of his recipes are based on wheat and, among the most curious sweets, we will mention the chogostas, some balls that have edible clay and whose origin dates back to pre-Hispanic times.

More traditional are duchesses, a kind of tacos filled with coconut meringue, and the masafins, some polvorones covered with sugar and cinnamon. For his part, tetamal It is a corn and sugar dough that is flavored with anise and served hot and wrapped in a berijao leaf.

La pumpkin He is the protagonist of several Veracruz sweets. It is the case of fritters, although, with respect to these, the gullets, which are filled with meringue. Finally, the pemoles they are cornmeal, butter and sugar donuts and the marzipan from Veracruz It is characterized by having peanuts instead of almonds. 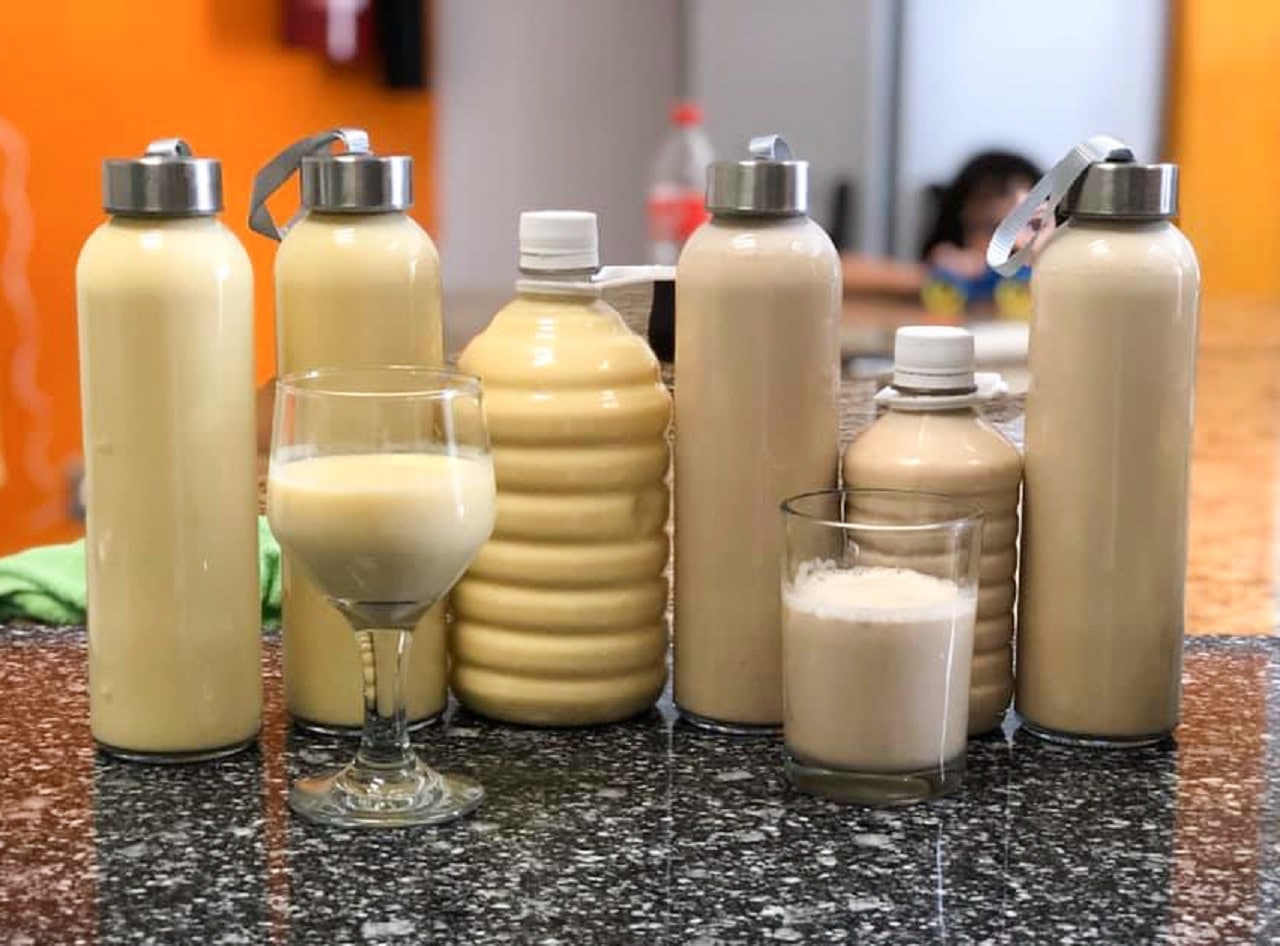 We have already told you about atole, which is made in different flavors depending on the fruit with which it is prepared. Thus, we can talk about atole of banana, pumpkin, corn or coyol (a fruit similar to coconut). It is also consumed in Veracruz the horchata, although it is not made as in Spain. There it is made with rice and cinnamon or vanilla.

More typical still are drinks like menyul, made with mint, and the butt. The latter will be delicious, as it has cocoa, rice, cinnamon and fruits such as azquiote. Finally, the bull It is an alcoholic cocktail whose ingredients are cane brandy, condensed milk and peanut butter, although it is also made with other flavors such as mango.

In conclusion, we have told you about the typical food of Veracruz. As you will see, it includes dishes of all kinds, which are more delicious. But Veracruz not only stands out for its gastronomy, it is worth visiting, we encourage you to explore too what to visit in Veracruz. If you do not dare to do it due to the limitations of the pandemic, here is an article about the requirements to travel by countries so you can do it without fear.