Malta is an island in the Mediterranean, a republic that it is only 80 kilometers from the southern coast of Italy and less than 300 from Libya and Tunisia. It is the land of the sun, we could say, since it usually enjoys 300 sunny days per year And if we add to that crystal clear and clean waters, it is undoubtedly a great vacation destination.

Malta has it all: landscapes and good weather, but also thousands of years of history from prehistory, through the Middle Ages to the Modern Age. I've always been drawn to megalithic ruins and their strange canals carved out of the rocky ground, so Malta is a question mark as well as a tourist destination. Mystery and beauty, what a combination!

The island became independent from Great Britain in 1964 but it continues to have an English imprint on its streets, telephone booths and red mailboxes. Luckily the cuisine is very Mediterranean, yes. To Malta it is advisable to go in autumn and spring so one of the best seasons to visit is beginning. Winter is not convenient since it can rain and the temperature does not rise above 15ºC, but if you are tight on your budget it is convenient for you because the prices of accommodation and flights are cheaper.

The currency in Malta is the euro and I advise you to take a look at the Visit Malta website before you travel because it is extremely useful. Once in Valleta, the capitalYou always have the local tourist office at hand because in truth it is not a single island but several and since you are there you should know them all.

It Malta, Comino and Gozo. Among its tourist attractions you have beaches, archaeological sites, museums, galleries, old forts and medieval towers and among all that some sites World Heritage. Here I leave you information about what you can do and see on each of the islands. Let's start with Malta.

What to do and see in Malta

It is the largest island and we could define it as a huge open-air museum. On Valleta, the capital, named after the founder of the Order of Saint John, Jean Parisot de la Valete, is a fortified city Impressive built on top of Mount Sceberras. The fortress began to be built in 1566 and in just 15 years this complex of bastions, forts, walls and even a cathedral inside came to life.

It is a city to walk, always crowded, with historic buildings, statues, fountains and parapets everywhere. There are restaurants and cafes in each alley so yes or yes you must walk it. Write these down sights:

If you don't know much about Malta and you want a general screenshot then you can go to the Mediterranean Conference Center, in the XNUMXth century hospital of the Order of Saint John, the Sacra Infermeria, as a 45 minute video recounting the seven thousand years of Malta. And if you want, you can even take a guided tour of the old and picturesque building.

Walking through the city you will come across my favorite Maltese mystery: the grooves that come and go and they even go into the sea. They go two by two, like lanes that run parallel, and have been carved who knows by whom and why in the rocky ground. There are several theories but the truth remains elusive. They are over six thousand years old.You can also make a evening tour in an open-air bus. It is in 16 languages ​​and lasts four hours but there is a 60 minute break. 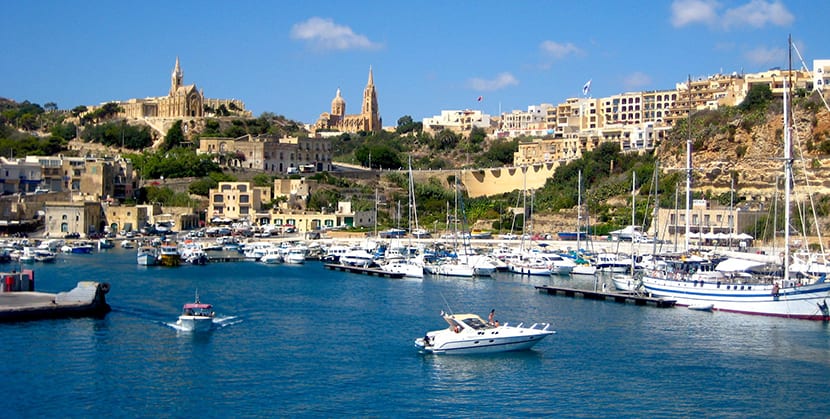 One of the excursions you can do from Malta is to cross to the island of Gozo, a quieter island, more green, more rural and smaller. It is the legendary island of Calypso featured in the Odyssey, an island of rugged landscapes and marvelous coastline with an interior studded with old Baroque churches and farms.

Under its waters they hide excellent dive sites but on the mainland it is not lacking in attractions either, as there are ancient temples, such as Ggantija, and old forts. If you stay to sleep it has a very interesting nightlife with many restaurants and each season brings its own calendar of cultural events. In autumn, for example, there is the Mediterranean Festival with excursions, walks, gastronomic events and art exhibitions.

It is an island of fishermen and precisely in the coastal towns you must taste the best fish and seafood. The island even offers its own tourist walks around food and drink, olive oil, its wines, for example.

The island is between Malta and Gozo and is smaller still than Gozo: 3.5 square kilometers. If you want something with fewer tourists, more surfers and people who enjoy diving this is the destination that you cannot miss on your visit to Malta. Almost nobody lives here, cars are not allowed and there is only one hotel.

She owns a Blue Lagoon impressive surrounded by white sands and transparent waters. There are other beaches, those of the San Niklaw and Santa Marija bays, so people come to spend the day, walk, sunbathe, swim and take good photos. And if you love this summer peace then you can stay at the hotel.

UNESCO has declared the megalithic temples of Maleta and Gozo World Heritage, seven temples in total very different from each other and all wonderful. In Gozo there are the two temples of Ggantija, a huge structure from the Bronze Age, and in Malta you find those of Tarxiwn and Hagar Quinn Mnajdra. Considering the scarcity of resources, it is impressive that they have been built.

Two weeks in Malta is enough for you to jump from island to island and fully enjoy them at three. An ancient micro-universe of history, culture, tourism and gastronomy that is not far from it. You dare?

Full path to article: Travel News » Getaways Europe » Malta » What to do when visiting Malta