La capital of Mexico it is an old, vibrant, populous, fun, historical, interesting city. There are no adjectives for the most important city in the country, a city that you cannot leave without visiting the most important.

Today, in Actualidad Viajes, we get involved with what to see in Mexico City. Let's have fun!

Before it was known as Mexico City, by federal district. It is the most important city in the country and the political, financial, social and tourist heart. The exact date of its foundation is not known, although it is assumed that it was around the year 1325, by the hand of the people Mexicans which, in turn, was defeated and dominated by the Spanish.

The Viceroyalty of New Spain dates from 1535. The independence of Mexico took place in 1821 and around 1824 the city became a federal district, different from the other states that make up the country, and became the seat of the powers of the State. Towards the end of the 80s of the twentieth century the modifications in its political status began and thus the name became simply that of Mexico City.

Nowadays here are 35 places that UNESCO has declared a World Heritage Site, more than a hundred museums, In other words, it is the second city with the most museums in the world behind London, so you can imagine that it is a tourist mecca.

What to see in Mexico City

The Zocalo is the name of the main square or Plaza de la Constitución, which It is the most important square and one of the largest in the world. Around it are many important sites, for example the Metropolitan Cathedral of Mexico, of baroque style ordered to be built by Hernán Cortés himself on an Aztec temple. Inside is the Crypt of the Archbishops, the altarpiece of the Kings, the Royal Chapel and a beautiful choir.

Another building around the Zócalo is the National Palace with the famous mural of the no less famous Diego Rivera. In one of the corners of the square is what remains of the so-called Main temple, the heart of the ancient Mexican civilization and the old capital, Tenochtitlán. The Spanish colonization tried to sweep away all memory when building the city, but during the XNUMXth century different archaeological excavations were revealing that great past.

You will see the remains of a pyramid and other buildings and what was found is in a museum within the complex, for example the stone relief of the goddess Coyolxauhqui, the sphinx of the fire god and an impressive monument to Tlatecuhtli.

Also, in another corner of the Zócalo is the Old Portal of Mercaderes, a set of commercial buildings from the XNUMXth century, today converted into hotels and luxury shops. A good vantage point is the terrace of the Hotel Majestic or the viewpoint of the Gran Hotel.

Also within the historic center of the city you can visit the College of San Ildefonso, an old very prestigious educational institution, whose classrooms passed characters such as Frida Khalo and Diego Rivera. In fact, the couple met here.

Walking down the Madero pedestrian street from the square you come across one of the tallest skyscrapers in the city, the so-called Torre Latinoamericana. Its viewpoint is a true classic, but inside there is a permanent exhibition, there is the Bicentennial Museum, a bar on the 40th floor and a restaurant on the 41st floor. The open terrace is on the 44th floor.

If you like art then you have to visit the Palace of the fine arts which is close to the Torre Latino. The building dates from the early 1900s, it is in the Art-Nouveau style, although its interior is Art-Deco. It is made of white marble and inside there are works by Siqueiros, Diego Rivera or Rufino Tamayo. In addition, it also works within the Museum of Architecture and the theater where you can attend a popular show very patched for tourists: the Folkloric Ballet of Mexico. 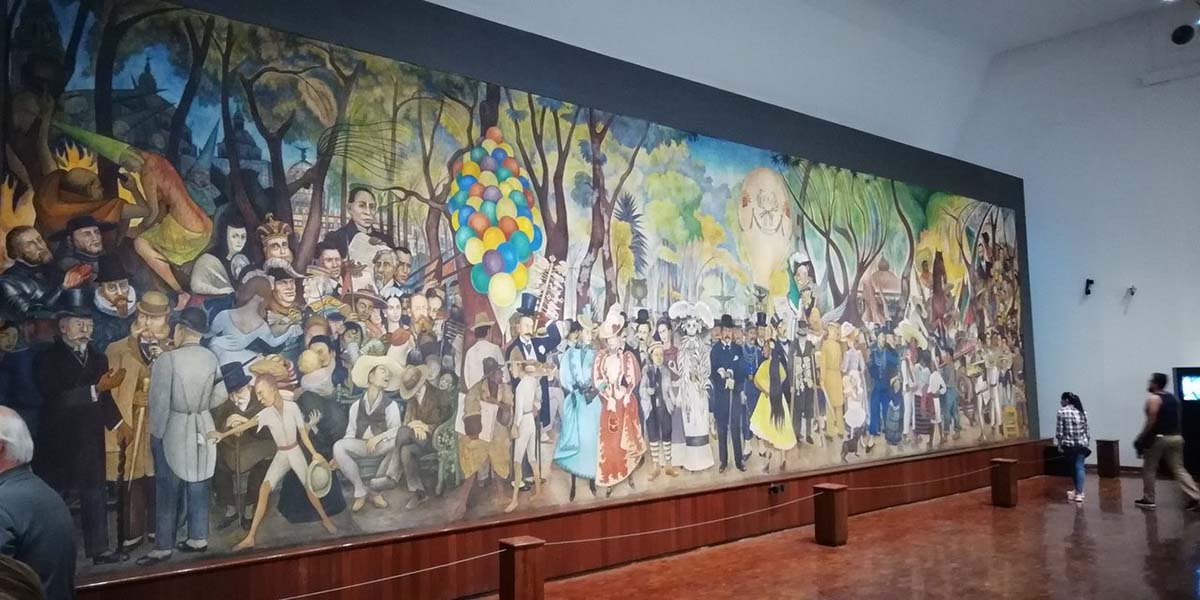 If you specifically like Diego Rivera and his work you can visit the Diego Rivera Mural Museum which is at the end of the Alameda Central, a path of fountains and greens. For more art there is the National Art's Museum, in front of Plaza Manuel Tolsá with its valuable art collection that goes from the XNUMXth to the XNUMXth century.

Visiting a city always implies moving, walking, moving. Here, in addition to the center, beauty is found in different neighborhoods. One of them is Coyoacán, south of the city. It is a Bohemian neighborhood, place of artists and colonial houses, with museums, markets, bookstores, coffee shops. This is where the Blue House of Firda Khalo and Diego Rivera, today a museum, but there is also the Leon Trotsky House Museum, Hernán Corté Houses, the Centennial Garden or the Municipal House.

Other recommended and beautiful neighborhoods are Condesa and Roma, with its beautiful tree-lined streets and houses of different architectural styles, shops, cafes, trendy bars. It is here where you can also observe the best of the Mexican urban art or street art. To appreciate this you can sign up for a guided bike tour that takes you through various corners of the city.

Walking, you will surely reach the Plaza of the Three Cultures, Spanish culture, because there is the colonial parish and convent, the culture of Tenochtitlán with its ruins and pyramids and modern Mexican culture with the University Cultural Center. Rare to see everything in one place, but great from a tourist point of view.

If you like to see culture and go shopping, then you have to take advantage of the markets and in this sense one highly recommended is the San Juan Market. This place is in the heart of the city and has a century and a half of life. There is everything from common and exotic food products, including insects, to dairy products and deli.

Mexico is also synonymous with revolution, so to know the Mexican independence movement you have to go to the Monument to the Revolution, a huge and impressive structure within the Plaza de la República. It's about a mausoleum dedicated to Mexican heroes, Pancho Villa among them. There is also the Museum of the Revolution, the intermediate viewpoint that reaches almost 66 meters, at its feet the pillars with wax figures, and the so-called Paseo Linternilla with its domes.

Also related to independence is, within the Paseo de la Reforma, the Angel of Independence, national symboll. It dates from 1910, the year of national independence, and has the Greek goddess of victory in bronze with gold. This avenue is the most important in the city, with 15 kilometerss, touching many important places in its journey.

At night, in the Centennial Fountain in the Plaza de la República, the light show and music. And speaking of the night, when the sun goes down a good destination is the call shingles rosa which is in Colonia Juarez.

There hotels, bars, restaurants, nightclubs and many tourists, because it is about having fun. here is the gay scene Also and you can go from here to the Roma Forte neighborhood walking through the Roundabout of the Insurgentes, one of the main pedestrian roundabouts in the city.

Last but not least, other places that you cannot miss on today's list of what to see in Mexico City: the Castle chapultepec, former residence of the Emperor Maximilian in 1864, with furniture and decoration of that time, the Nacional History Museum (inside and with a guided tour if you want), the Bosque de Chapultepec 500 hectares, huge, with museums, lakes and restaurants, the huge and valuable National Museum of Anthropology of Mexico (This is where the Stone of the Sun is, Moctezuma's headdress, the replica of the tomb of King Pakal, a native of Palanque with his jade mask, or the Mayan Room. 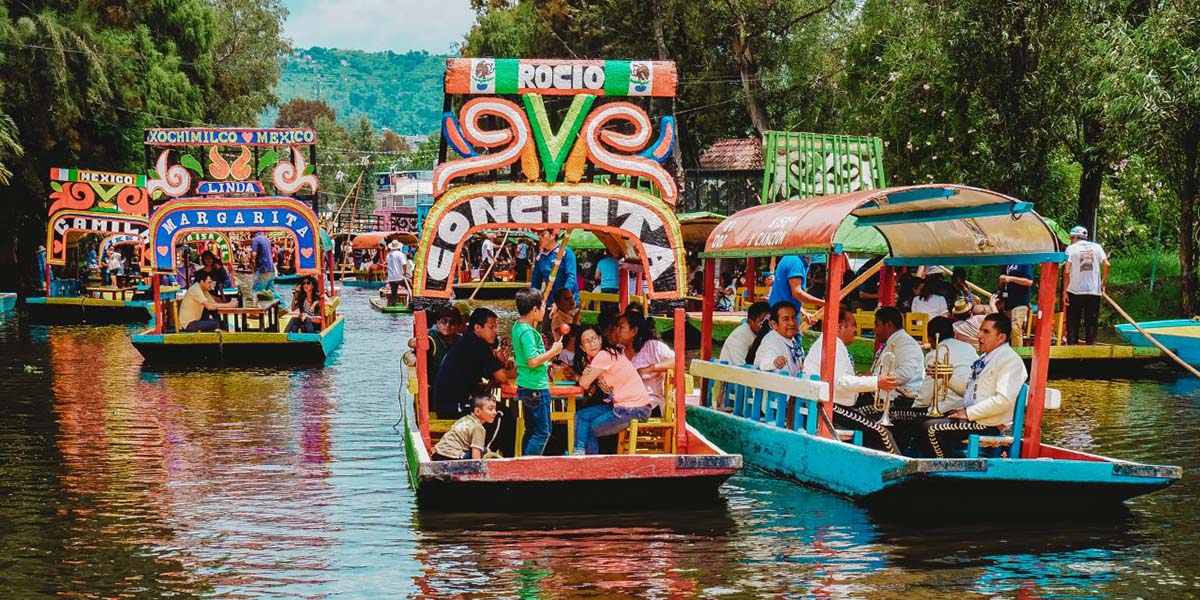 For chic and elegant outings there is the Polanco neighborhood, home to many embassies, for walks through quiet neighborhoods are San Ángel and Chimalistac, the Xochimilco canals, to walk in trajineras colorful and see the market or the Dolores Olmedo Museum with its large collection of Rivera's works, and of course, the archaeological site of Teotihuacán with its pyramids of the sun and the moon, the citadel, the avenue of the dead and others. It is reached by bus.

Of course, this list that we have encouraged ourselves to do is just a sample of what the wonderful and enormous Mexico City has to offer its visitors.