Facing the cliffs of Maro and from the blue of the Alboran Sea, nothing suggests that under the mountain is one of the most impressive caves in Spain: that of Nerja. They were discovered in 1960 and are part of the country's historical heritage, being declared a Site of Cultural Interest, which makes them a very interesting place to visit.

If you've never heard of the Nerja caves before, you can't miss the next post. We will take a brief tour of this beautiful natural wonder that will surely encourage you to visit it.

History of the caves of Nerja

Due to their huge natural vaults covered with stalactites, the Nerja caves are also known as the Natural Cathedral of Malaga. They were discovered in January 1959, when a group of young people were walking through the countryside in search of nocturnal animals and they came across this wonder of nature made up of three galleries: the high galleries, the low galleries and the new galleries.

Levels of the caves of Nerja

The low galleries are in turn divided into two levels and were the most accessible space for the first settlers of the cave thousands of years ago. ANDThe upper level was dedicated to everyday life: cooking food and its preparation, shelter for livestock, making ceramic objects, etc. At the lower level, it has been found that the area was used for burials and grave goods as well as for rituals and spiritual exercises.

The high and new galleries are not accessible to the public as they are a study space for archaeologists, biologists and geologists. However, on both levels of the lower galleries we can see how the geological and geographical history of the area has been reflected in the caves for millions of years.

Many of the people who have visited the caves of Nerja pointed out that the most special thing about their visit was the silence that is enjoyed walking through its entrails, only interrupted by the dripping of water from a leak.

The cave is like a book that, as we read it, reveals the events that took place at the beginning of time. They seem to have no end, and only 30 percent of their total extension has been discovered! 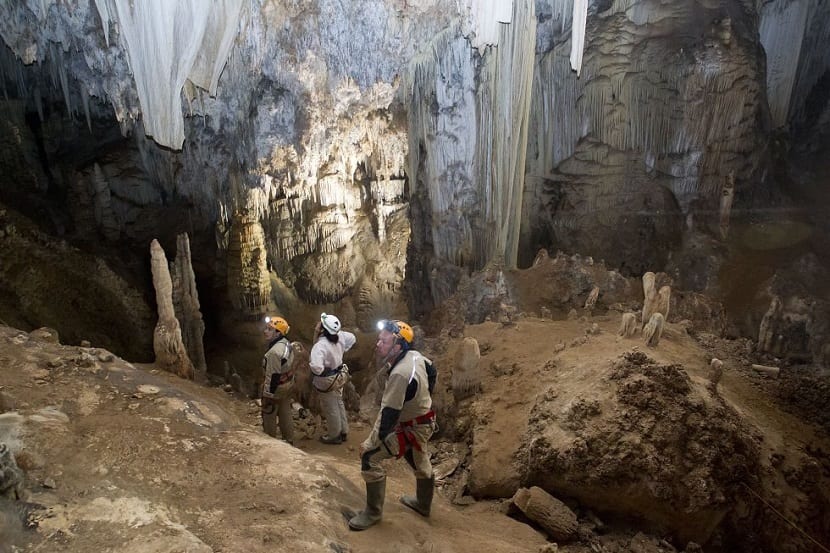 What to see in the caves of Nerja?

The Nerja caves have almost 600 cave paintings from the Upper Palaeolithic and recent prehistory, although for conservation reasons they cannot be visited.

Of the caves you can highlight the spectacular nature of their speleothems that surround the cavity from the ceiling, floor or walls. There is a great variety of kinds of stalactites, stalagmites, columns, macaroni or gours.

The Cataclysm room is the most impressive. Here we can have a good time observing its central column considered the largest cavern column in the world, with 34 meters high and 18 in diameter, and in which we see the effects of an earthquake that occurred more than 800.000 years ago that caused large rocks to detach from the high parts and collapse towards the ground.

Another surprising room is that of the Ghosts, since from it you have beautiful views of the caves and their spectacular formations.

In the past, the filtration of water was much higher than today, but even so the cave is still alive and stalactites and stalagmites continue to form, although very slowly. These leaks are not easily seen but if you look it is possible to see water.

Recommendations for the visit

It is better to buy tickets in advance because from May to October they sell out at the box office quickly. It is important to wear comfortable non-slip footwear as some areas have water leaks and the floor can slip. The temperature of the cave is around 20ºC, it is necessary to wear warm clothes, although something with which we can cover ourselves if we feel cold.

The Nerja caves are open all year round except on January 1 and May 15 for the celebration of the Pilgrimage of San Isidro, patron saint of farmers.

Price tickets to the caves of Nerja

The visit to the Nerja caves consists of an audiovisual projection, and an audio guided tour of the tourist gallery passing through each and every one of its rooms.

The entrance fee to the Nerja caves is € 10 for adults, € 6 for children from 6 to 12 years old and free for children under 6 years old.

The museum offers a multimedia show and a journey through the history of Nerja where various old tools from prehistoric times are displayed. In addition, we will also witness the evolution that Nerja experienced in tourism in the 60s after the discovery of the caves and the sea of ​​Nerja and among other things.

The Nerja Caves Museum is located in Plaza de España in Nerja number 4.