The beaches near Lisbon make up for the lack of sand in the Portuguese capital. In fact, one step away from it, you can find many that stand out for their white sands and crystal clear waters. In addition, these beaches are among the best in the neighboring country and, in summer, they are filled with tourists.

Therefore, while visiting monuments such as the Cathedral of Santa Maria Maior in Lisbon, Torre de Belém, Castle of St. George or Monastery of los jeronimosYou can also enjoy wonderful beaches near Lisbon. We invite you to know them.

The best beaches near Lisbon

As you know, Lisbon is at the mouth of the Tagus river. And where this meets the sea you have the Estoril coast to the north and the Caparica coast to the south. In both you can find magnificent beaches. Let's see them.

This beach is one of the best and most popular in the area. Chaired by the fort of Sao Juliao da BarraIt is a long beach with excellent quality of its waters. It is perfect both for you to go as a family and for you to do it alone. To a large extent, this is because it also offers you all the services.

It has bars and restaurants, sports spaces and even fixed umbrellas on the sand. There are also businesses that organize water activities. In this sense, the surf schools, since many days there are quite good waves to practice this sport.

Located in the same estuary of the Tagus, it is also a wide stretch of sand. But its situation means that the quality of the water is not as good as that of the previous beach. It also has all the services and, among those in the north of Lisbon, it is preferred by groups of Adolescents.

It is located right in front of the famous casino and is widely used by families due to the calm of its waters. In fact, under certain tidal conditions even natural pools. In addition, it has magnificent services.

As if that were not enough, the train station is also next to the beach and at one of its ends is the spectacular Barros chalet, one of the main attractions of the town.

The beautiful town of Cascais, a former summer resort of the Portuguese aristocracy, offers you three main beaches. The Conceiçao and La Duquesa sandy areas, separated by a point of land, they are the largest and also provide you with all the services. 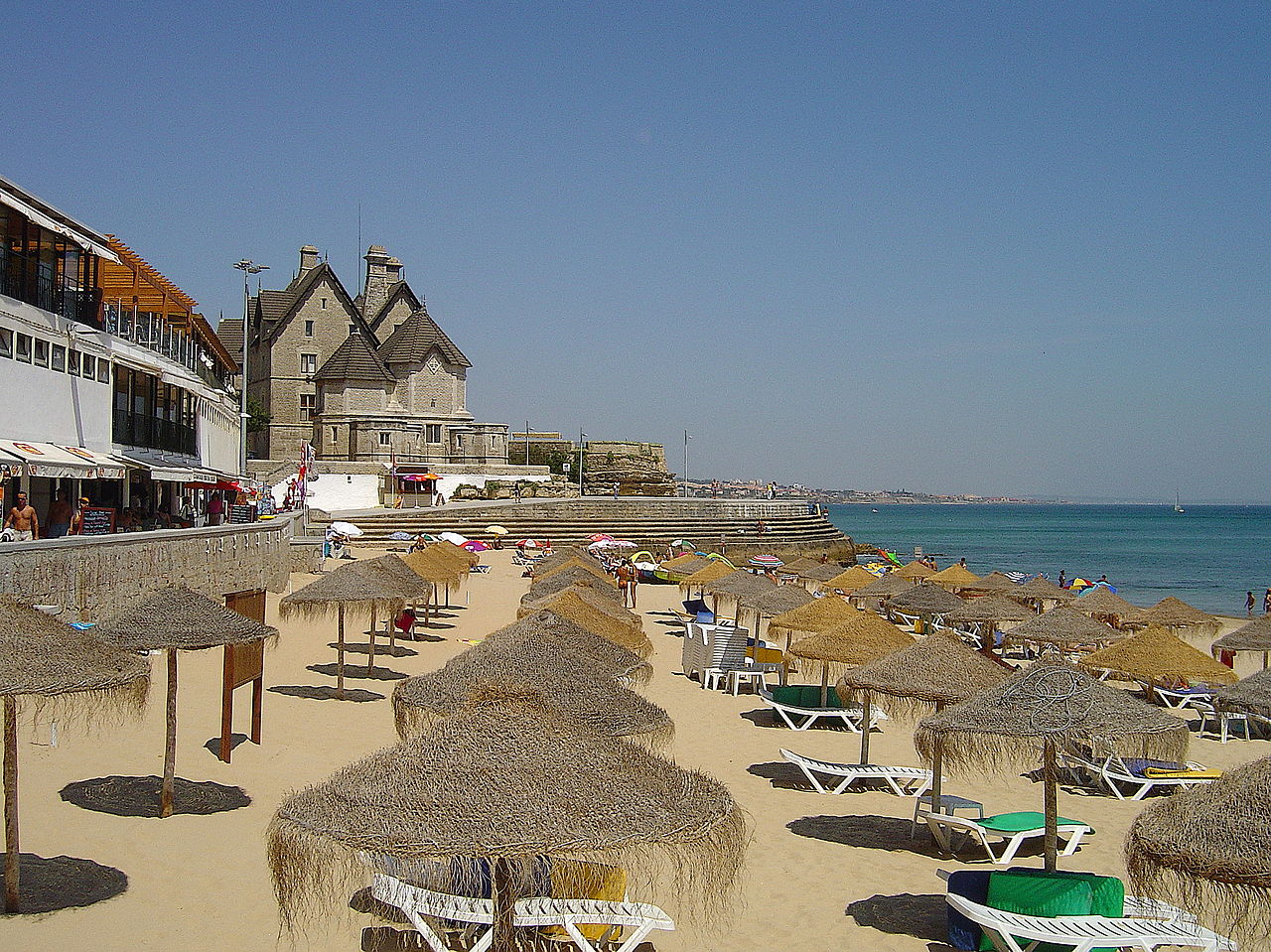 More picturesque is the rainha beach, a small cove that overlooks the fishing port and is surrounded by walls and rocks. The translation of its name into Castilian is Playa de la Reina and is so named because it was the private cove of Mrs. Amelia of Orleans, wife of King Carlos I of Portugal and a native of Spain, as she was the granddaughter of the Infanta Luisa Fernanda de Borbón. Therefore, if you bathe in it, you will feel like royalty.

Guincho, one of the best beaches near Lisbon for surfing

This beach semi-wild is located eight kilometers north of Cascais, in the Sierra de Sintra Natural Park. It is very open so the waves enter vigorously to the sand and the wind blows strongly. It goes without saying that if you like surfing or windsurfing, this is one of the best places to practice them in the area.

All the beaches near Lisbon that we have mentioned so far were to the north of the Portuguese capital. Now we go to the South to get to know the sandy areas of the Caparica coast, one of the most touristy in the neighboring country.
The first beach that we find in it is that of Sao Joao de Caparica, which extends to the south in another sandy area and has several campsites in its surroundings. Next is the Vila da Costa beach, also highly recommended if you like surfing.

Continuing in a southern direction, you will find the favorite beaches of young people. They are those of Acacias, South Acacias and dos Medos, where you can find night bars and discos. Apart from this type of fun, there are three magnificent sandy areas.

And finally, there is the Fonte da Telha beach, where the Caparica coast ends. It is wide, calm and with very blue waters. Therefore, it is perfect for you to go as a family. In addition, it marks the beginning of Sierra de Arrábida Natural Park, where you will find hiking trails that will allow you to see wonderful landscapes.

How to get to the beaches near Lisbon

If you do not travel in your own car, you have a wide range of public transport. To get to the beaches of Caparica coast, you can choose from various media. There are Bus, specifically two lines that leave from Areeiro and the Plaza de España in Lisboa and they are stopping in the sandy areas.

You also have a ferry line that leaves from Cais do Sodre or Belém. But in summer we recommend that you take the transpraia. It is a small and curious railway that runs along the coast with stops in the sandy areas of the area.

On the other hand, if you prefer to go to the beaches of Estoril or Cascais, you can do it at the commuter train that leaves from the Cais do Sodre station and reaches the last town that we have mentioned. However, Guincho beach is a bit further. Therefore, once in Cascais, you will have to take a bus.

Gastronomy of the area

If you enjoy the beaches near Lisbon, you can also take the opportunity to try the cuisine of the area. On the Caparica coast the grilled cod, like grilled sardines. The wake up, a seafood soup. But the ideal for a beach meal are the Francesinhas, some popular meat sandwiches.

Regarding the sandy areas in the north of Lisbon, both in Estoril and in Cascais the Fresh fish and seafood made on the grill. In this last locality, the Sands, some pasta that is made with butter, flour and sugar. Finally, in Carcavelos you have magnificent wines.

In conclusion, you have magnificent beaches near Lisbon. Our recommendation is that you enjoy them while visiting the wonderful monuments from the Portuguese capital.