Robledillo de Gata is located in the Arrago valley, located between terraces that stagger the Sierra de Gata. For this reason and due to the difficulty of its communication routes, it has been able to preserve all its peculiarities, such as the medieval layout of its streets and the unique architecture of its houses.

Thanks to all this and to being a perfect example of a country town built functionally for agricultural tasks, Robledillo de Gata has been declared A Cultural. If you enjoy doing rural tourism, you should know this town in the province of Caceres. Do it with us.

What to see in Robledillo de Gata

The first thing that draws attention in the Extremaduran town is the winding layout of its streets, many of which run under the cantilevers of the houses that thus form small tunnels. They are steep and narrow roads that will transport you to another time.

The houses are the most unique thing in Robledillo de Gata. They respond to popular architecture from the province of Cáceres and present a curious architectural uniformity. They are built with adobe, wood and slate.

The former is used for the walls, while the latter is noticeable in the corners. And all this is complemented with wood and reed, mainly in the eaves. These are very pronounced and come to join with those of the house opposite, forming the passageways that we have mentioned. 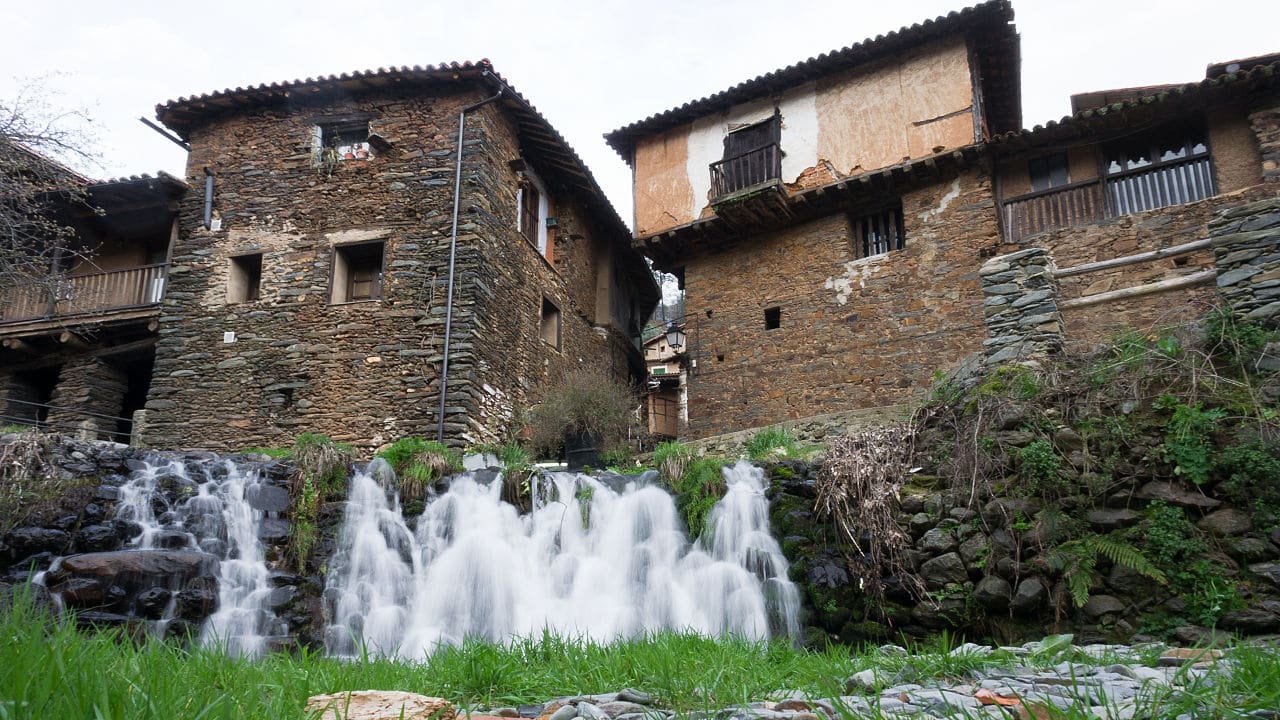 These constructions also have balcony run and dryers where it is common to see corn exposed to the sun. This is because they are dedicated to housing but also to agricultural uses. The first floor is usually located on the first floor, while a second floor acts as a loft. Finally, the gabled roofs are made of Arabic tile.

The main religious monument of Robledillo de Gata is the church of Our Lady of the Assumption, built in the sixteenth century and has a curious hexagonal plan. Also noteworthy are the roof of the sacristy, which is in the Mudejar style, and the Christ located on the altar, which has articulated arms and great realism.

Next to this temple, you can see in the town of Cáceres two other hermitages from the XNUMXth century, that of the Lamb y that of the Humilladero. For its part, hermitage of San Miguel It is built with the typical slate of the area.

The Árrago river runs through the lower part of Robledillo de Gata. Taking advantage of its waters, a hydraulic mill was built in medieval times. It was used to press olives and obtain oil. It is currently known as Molino del Medio and houses, precisely, a curious oil museum. In it you can see all the traditional machinery and utensils that were used to get this product. In addition, it has a store where you can buy it.

Church of Our Lady of the Assumption

Things to do in Robledillo de Gata

The Árrago river has also been used by the inhabitants of the Extremaduran town to create natural pools where you can take a bath in summer. But the main activity you can do in Robledillo is hiking along the routes of the Sierra de Gata.

One of the most popular is the one that leads to the hermitage of Santo Tomé. In part it is because it is affordable for everyone, as it only lasts XNUMX minutes. On the way, you will also pass through impressive chestnut, pine and oak forests. And also for the La Lagartera viewpoint, where you can enjoy magnificent views of the mountains.

Another interesting route is the one that leads to Sheep Plover. This is an impressive waterfall that ends in a beautiful natural pool where you can also take a bath. The road also runs through terraces and terraces of crops.

The Roman road route. It stretches for about ten kilometers that run through forests of holm oaks, pines, chestnut trees and strawberry trees.

What to eat in Robledillo de Gata

The gastronomy of the Sierra de Gata is magnificent and also forceful. Two of its star products are Oil y mushrooms. In fact, in the area there are abundant gurumelos, whose scientific name is amanita ponderosa and which is prepared in different ways.

Typical dishes that you can taste in Robledillo de Gata are the crumbs; The almodu, a stew that has cabbages and beans or chickpeas; the Calluses; The antruejo soup; The partridge with quince and hare stew, which has vegetables, spices and bacon. But, when it comes to meats, they stand out those of pig. With it recipes such as Extremaduran hooker or the chanfaina.

As for desserts, you have a delicious Orange Salad, mañegos cakes and, above all, the magnificent cheese of the province of Cáceres. Together with them, perrunillas, a sweet that has lard, and the toads, with bread, milk and sugar.

Finally, to drink, you can enjoy a wine from the Sierra de Gata. Among them the Verdejo or Palomino whites. 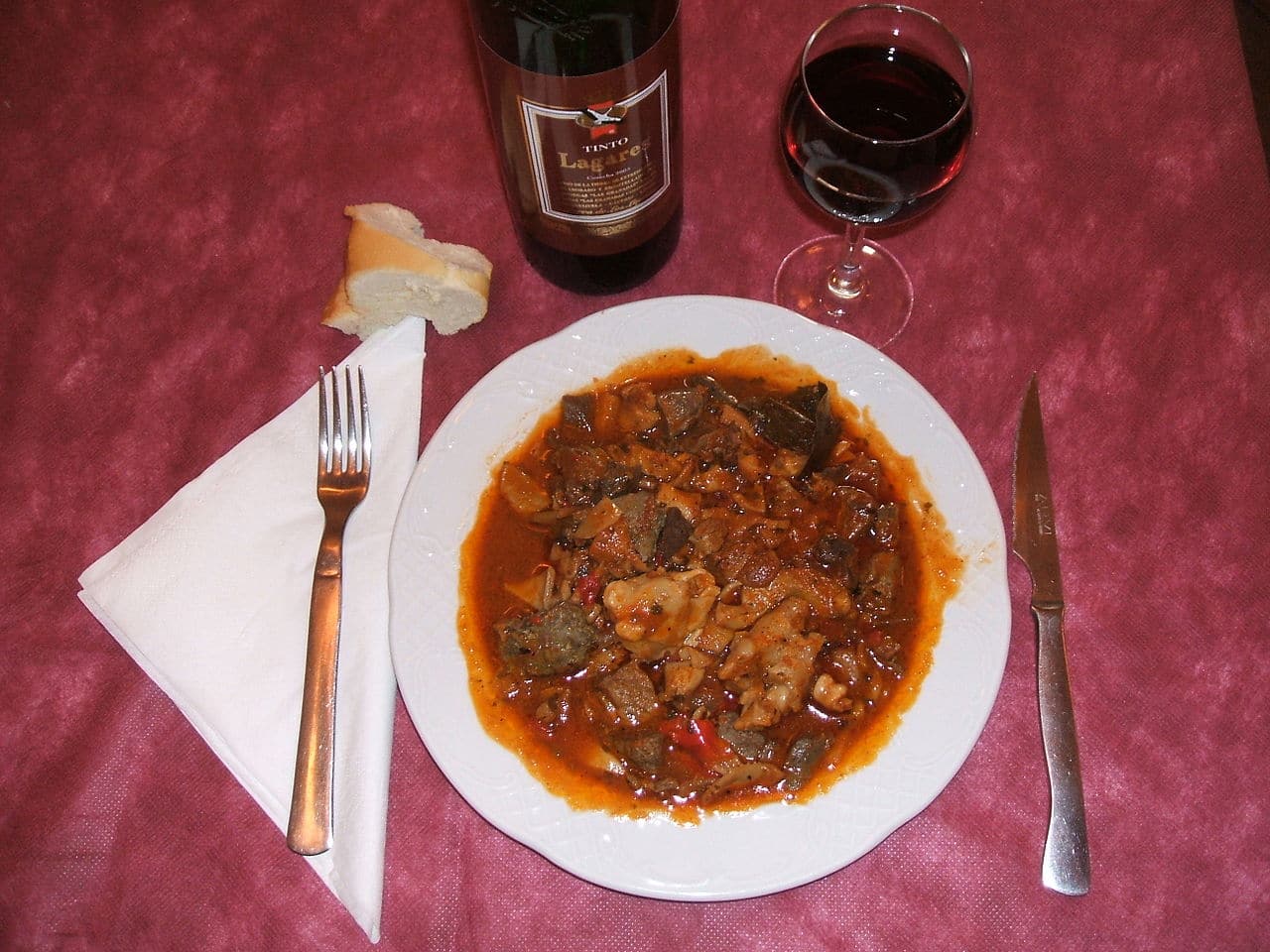 What is the best time to visit Robledillo de Gata

The entire Sierra de Gata presents a Mediterranean climate with continental influence in summer and oceanic in winter. In this last period there are relatively mild temperatures, with averages around six degrees.
For its part, summer is warm, with temperatures around twenty-five degrees Celsius. The rains are concentrated, above all, in the months that go from November to April and are quite abundant. As for snowfalls, they are rare.

Therefore, the best times for you to visit Robledillo de Gata are spring and summer.

How to get to Robledillo de Gata

If you travel by car, there are two regional roads that reach the town of Cáceres. Are the CC-7.1 and CC-7.2. To park, you have a large square next to the hermitage of Humilladero. You can also travel to Robledillo by bus. There is a line that connects Cáceres capital with the towns of the Sierra de Gata.

In conclusion, Robledillo de Gata is a beautiful Extremaduran village where you can enjoy a peculiar architecture, viewpoints that offer you beautiful landscapes and delicious cuisine. Do you dare to meet her?