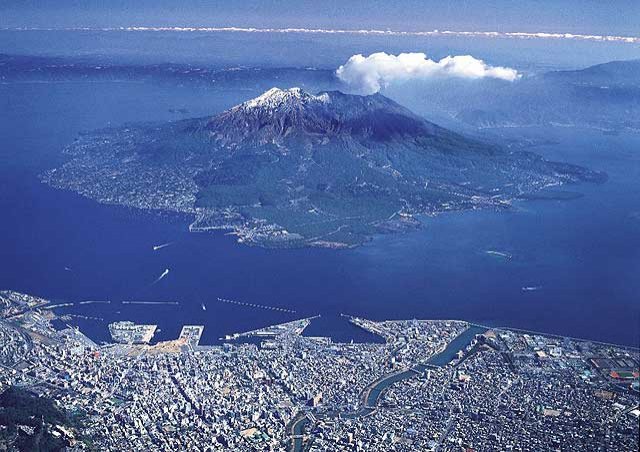 El Sakurajima It is one of the most active volcanoes in Japan and probably the world and the symbol of the city of Kagoshima, whose inhabitants have struggled for a hundred years between love and fear of their great mountain of fire. If there is a living volcano on the planet, it is undoubtedly Sakurajima: it constantly emits smoke and gases and from time to time low intensity eruptions are recorded. In 2010 the volcano broke its own record for annual explosions, some of which reached 5 km. Tall.

It was in 1914 that the largest and most destructive eruption on record occurred. Large and fearsome rivers of lava ravaged the area and solidified  transformed the then island of Kagoshima into a peninsula, which by the way has affected the tides, increasing their amplitude. In short: the forces of Nature played to reshape the map of Japan, in addition to claiming the lives of 35 people. The "warnings" that the vlcán had given in the days prior to the disaster served to warn the population, which was evacuated en masse, preventing the number of fatalities from being even higher.

Despite being a really dangerous place, the Sakurajima attracts almost two million visitors every year. In the surroundings there are hot springs, hydrotherapy establishments and a very fertile soil that allows the cultivation of the thickest Chinese radishes in the world (some specimens reach thirty kilos in weight). This deolated place has also been the setting chosen for the filming of a good number of Japanese and foreign films.

In Nagisa Park visitors can admire the volcanic stones. If you visit this place it is best to spend a whole day. There is a bus that runs through the huge lava fields that the latest eruptions have created. The landscape changes year after year. Another option is to take the ferry that departs from Kagoshima and from which you can see the Sakurajima from the sea.