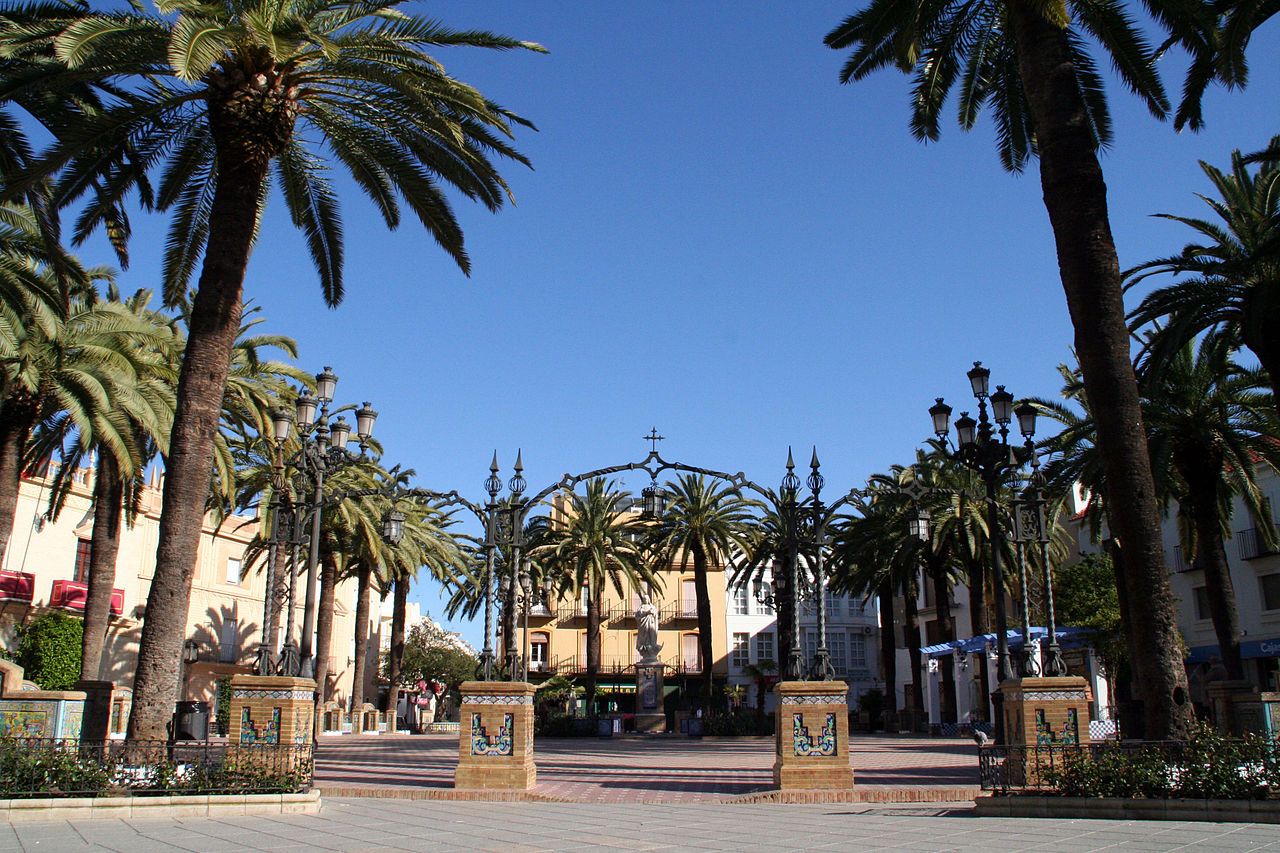 Each filtering bag most beautiful towns in Huelva they offer you peculiar white houses, monuments, beautiful beaches and natural wonders such as the Doñana National Park (here we leave you an article about this place). But also an offer of accommodation where you will find yourself at home.

Also, there is another part of the province less known for tourism that includes small towns located in the foothills of the mountain ranges of Cumbres Mayores or Aracena. We will also talk about them, but, above all, we are going to show you a tour of the most beautiful towns in Huelva that will allow you to know in depth the wonders of this area of ​​Spain.

We will begin our tour of the most beautiful villages of Huelva in the coastal areas such as Ayamonte and then move towards the interior of the province. In this way, we will show you the full range of possibilities that this beautiful land offers you. 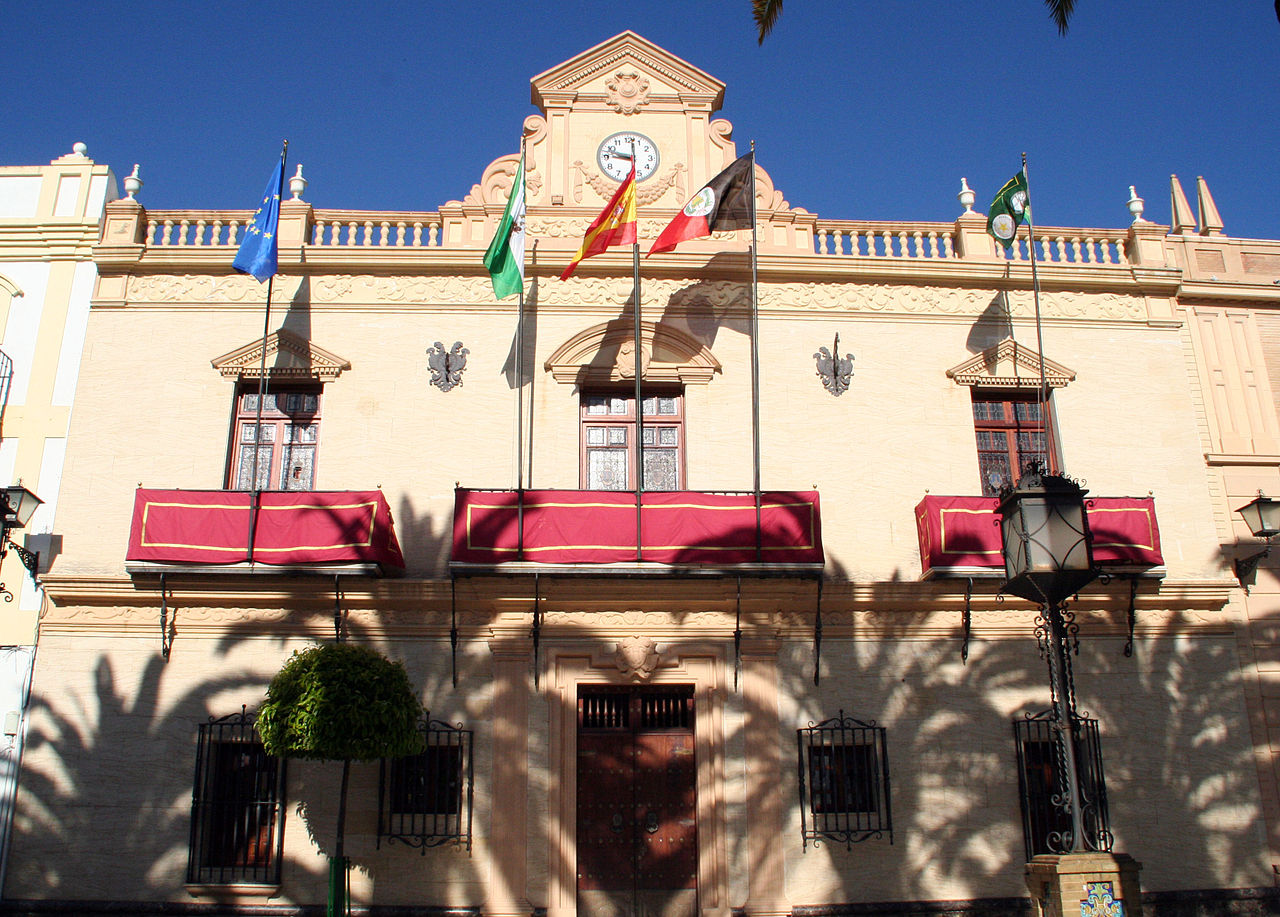 Located at the mouth of the Guadiana river, at the foot of Isla Cristina marshes and on the border with Portugal, this Huelva town is a must. In its municipal area you will find the popular Isla Canela beach next to Punta del Moral.

But, next to areas of high ecological value, Ayamonte has a wide monumental heritage. With regard to the religious, we advise you to visit the churches of Nuestra Señora de las Angustias and San Francisco, both from the XNUMXth century and which stand out for their Mudejar coffered ceiling.

You should also see the temple of El Salvador, inside which there is a Churrigueresque altarpiece and several tables of Flemish painting. The religious heritage of Ayamonte is completed by the church of Las Mercedes, the Mercedario and the Hermanas de la Cruz convents, the chapels of San Antonio, del Socorro and Nuestra Señora del Carmen and the precious monument to the Virgen de las Angustias.

Regarding civil architecture, you have the magnificent City Hall building or Marchena House, which reproduces the style of the Indian houses; the Roman mausoleum of Punta del Moral; the palace of the Marquis of Ayamonte or the Casa Grande, dating from the seventeenth century.

Finally, we advise you to see the Baluarte de las Angustias, of which only a canvas of the wall remains; the lonely Isla Canela tower and the impressive Guadiana International Bridge, which separates Ayamonte from Castro Marim, in Portugal. 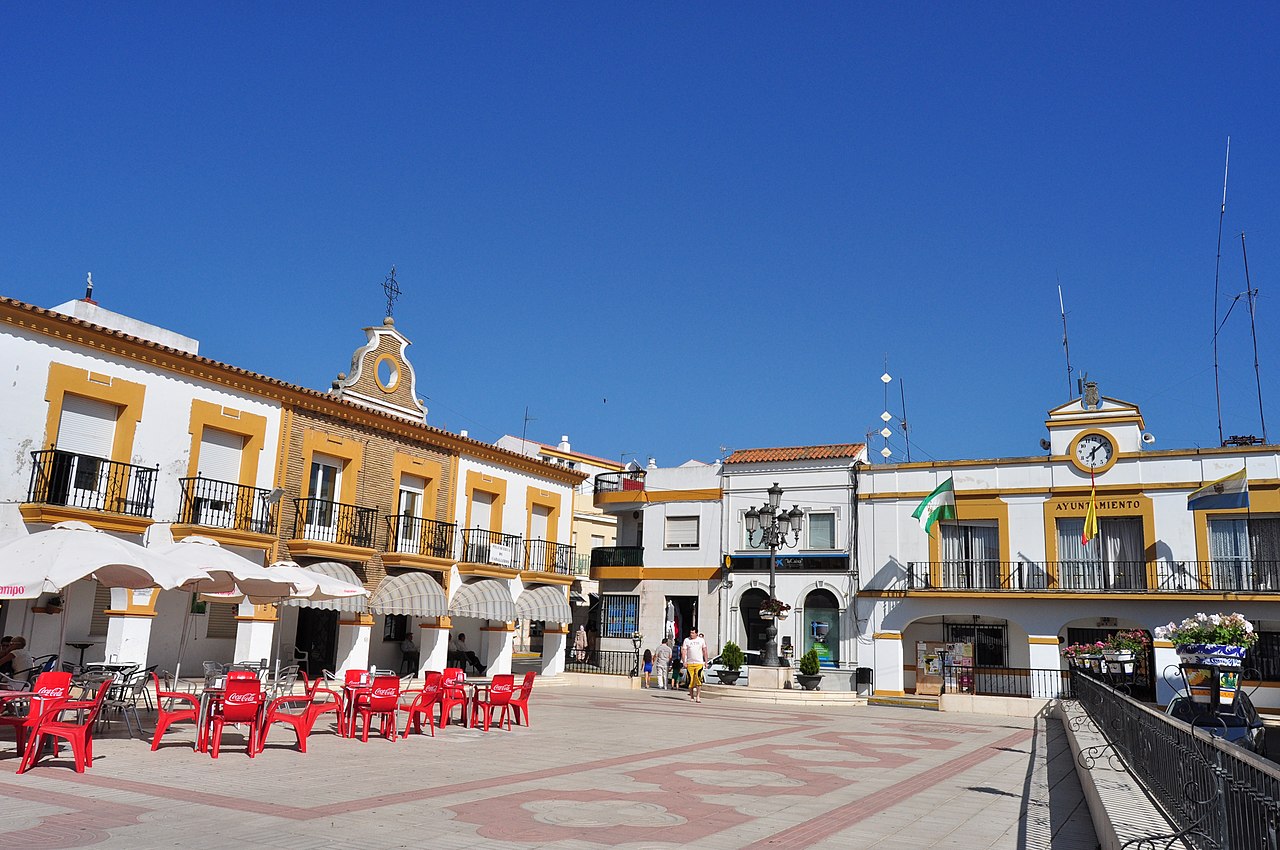 We now bring you this small town not only because it is among the most beautiful towns in Huelva, but also because of its great historical value. As you well know, from its port it left Christopher Columbus on the journey that led him to discover America.

All this has made Palos appear in the artistic historical itinerary of the Columbian Places. In the Huelva town you can visit the La Rabida monastery, which not only stands out for its Gothic-Mudejar church, but also for having a museum dedicated to the discovery of America. Likewise, in the port of Palos is the Muelle de las Carabelas, with natural reproductions of those that Columbus took in his feat.

You may not know that the famous Pinzón brothers, who accompanied him, were natives of this town. For this reason, in the house of the oldest of them, in the Renaissance style, you also have a museum. It was Martín and it also has a statue in the town.

But what you can visit in Palos does not end here. It is very interesting St. George's ChurchIt is also in the Gothic Mudejar style and houses Renaissance frescoes and a XNUMXth-century carving that represents Santa Ana. In addition, you have the Fontanilla, a small fountain that gave water to the caravels, and the archaeological remains of the Palos castle.

Finally, in the surroundings of the La Rábida monastery you have the Monument to the Discoverers, which is reached through an avenue adorned with the shields of all the Ibero-American countries and the José Celestino Mutis botanical park. And likewise, in the Muelle de la Calzadilla another feat that left Palos is commemorated: the flight of the Plus Ultra, a hydroplane that, in 1926, reached Buenos Aires. 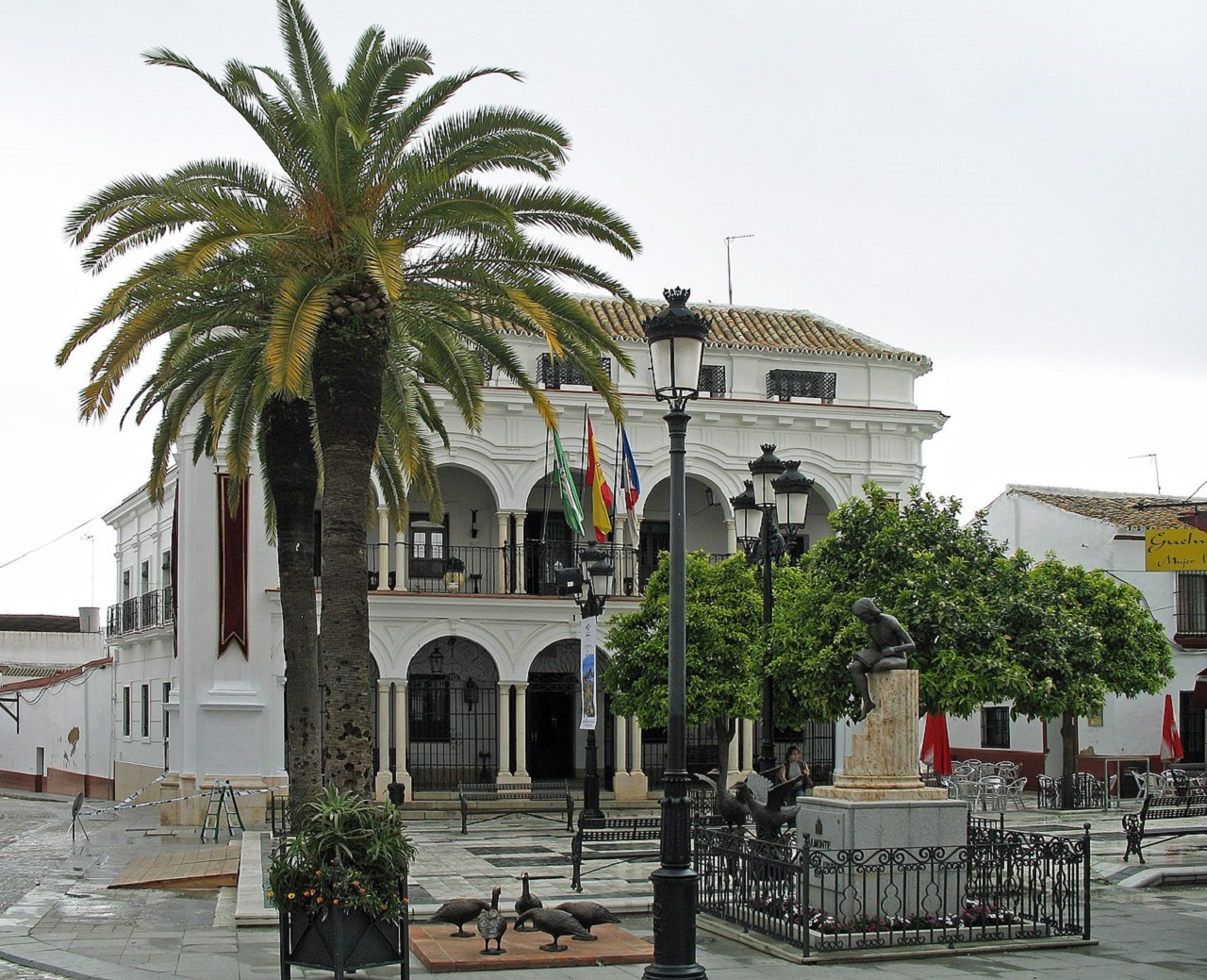 Almonte, one of the most beautiful towns in Huelva

We are going into the interior of the province of Huelva to stop at this beautiful town that has all the attractions. To begin with, in its municipal area are the beach of Matalascañas and a good part of the Doñana National Park. But above all, because it also includes the famous village of El Rocío, where the beautiful hermitage is located, to which thousands of pilgrims make pilgrimages every year. Here we leave you an article about this little village.

Likewise, you have other monuments of interest within Almonte. Among them, the church of Our Lady of the Assumption, with its Mudejar chapel, the Santo Cristo hermitage and the City Hall building, built in the XNUMXth century. The latter is surrounded by narrow streets with their traditional white houses.

Niebla, another of the most beautiful towns in Huelva 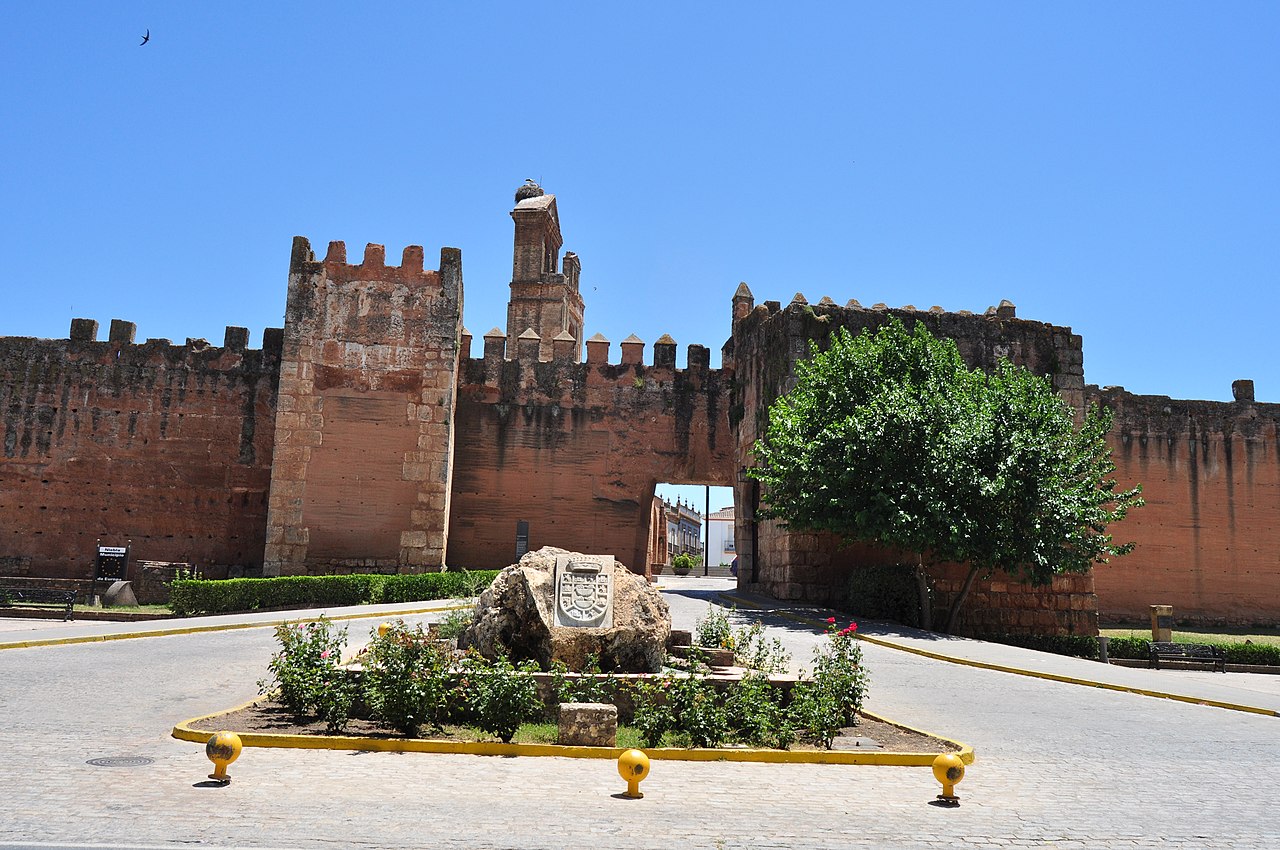 Walls and castle of Niebla

We now come to one of the most beautiful towns in Huelva, but also one of the least known, although it is a real gem. Niebla has a millenary history. In fact, it was the capital of one of the coras in which the Caliphate of Córdoba and, later, it became an independent taifa.

More abundantly, in its municipal area are the dolmens of La Hueca and de Soto, which take us back to the Iron Age. You can also see in the town a beautiful fully preserved Roman bridge and the remains of an early Christian cathedral from the Visigoth period.

But the greatest attraction of Niebla is the impressive ensemble that they form its walls and its castle from the Almoravid period. And next to it, the church of Nuestra Señora de la Granada, which is an old mosque in the Mudejar Gothic style; the castle of the Guzmanes and the Hospital of Our Lady of the Angels, current house of culture. 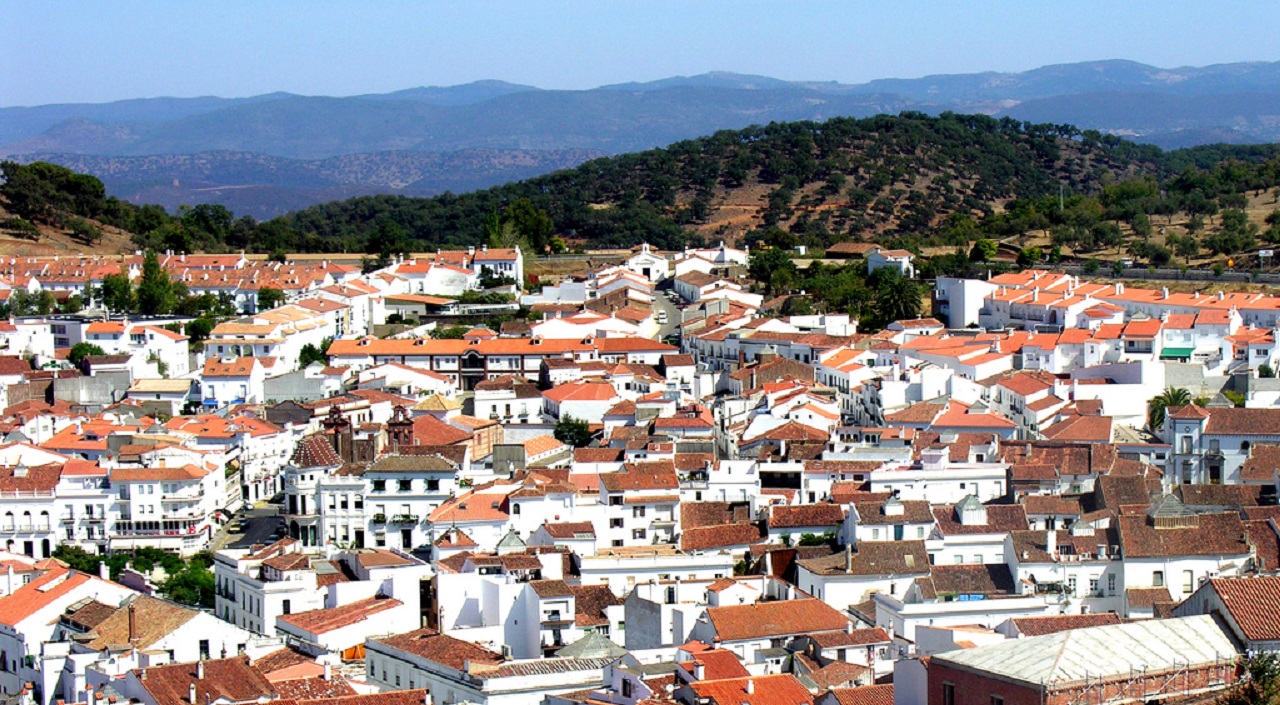 Already in the middle of the homonymous mountain range, we find the beautiful town of Aracena, characterized by its white-walled houses, a privileged natural environment and many monuments. As for the landscape, it is in full Sierra de Aracena and Picos de Aroche natural park, where, in addition, you can see the archaeological sites of Cueva de la Mora, Cerro del Tambor and del Castañuelo.

But the great wonder of Aracena is found under its urban area. We talk about the Grotto of Wonders, whose entrance is on Pozo de la Nieve street. It is an underground complex created by the erosion of water in the limestone rocks of the Cerro del Castillo. It has a length of more than two thousand meters, although you can only visit about fifteen hundred. But, in any case, you will find a unique show of stalactites, stalagmites, aragonites or coraloids combined with lakes.

After enjoying this wonder of nature, we also advise you to visit the main monuments of Aracena. We have already mentioned the most important to you in passing. We refer to castle, a very well preserved XNUMXth century Arab fortress.

Next to this is the Church of Our Lady of Greater Pain, Mudejar style, although some of its elements, such as the portal and the choir, already belong to the late Gothic. Identical architectural features present the convents of Santa Catalina Mártir and the churches of San Pedro or San Roque. But even more beautiful is the church of Santa María de la Asunción, built in the XNUMXth century according to the canons of the Renaissance style.

Aracena's heritage does not end here. As for civil architecture, we recommend that you see the City Hall building, the Aracenilla chalets, the San Miguel farmhouse and, above all, the spectacular Arias Montano Casino, a spectacular modernist style building.

Cortegana, to finish our tour of Huelva 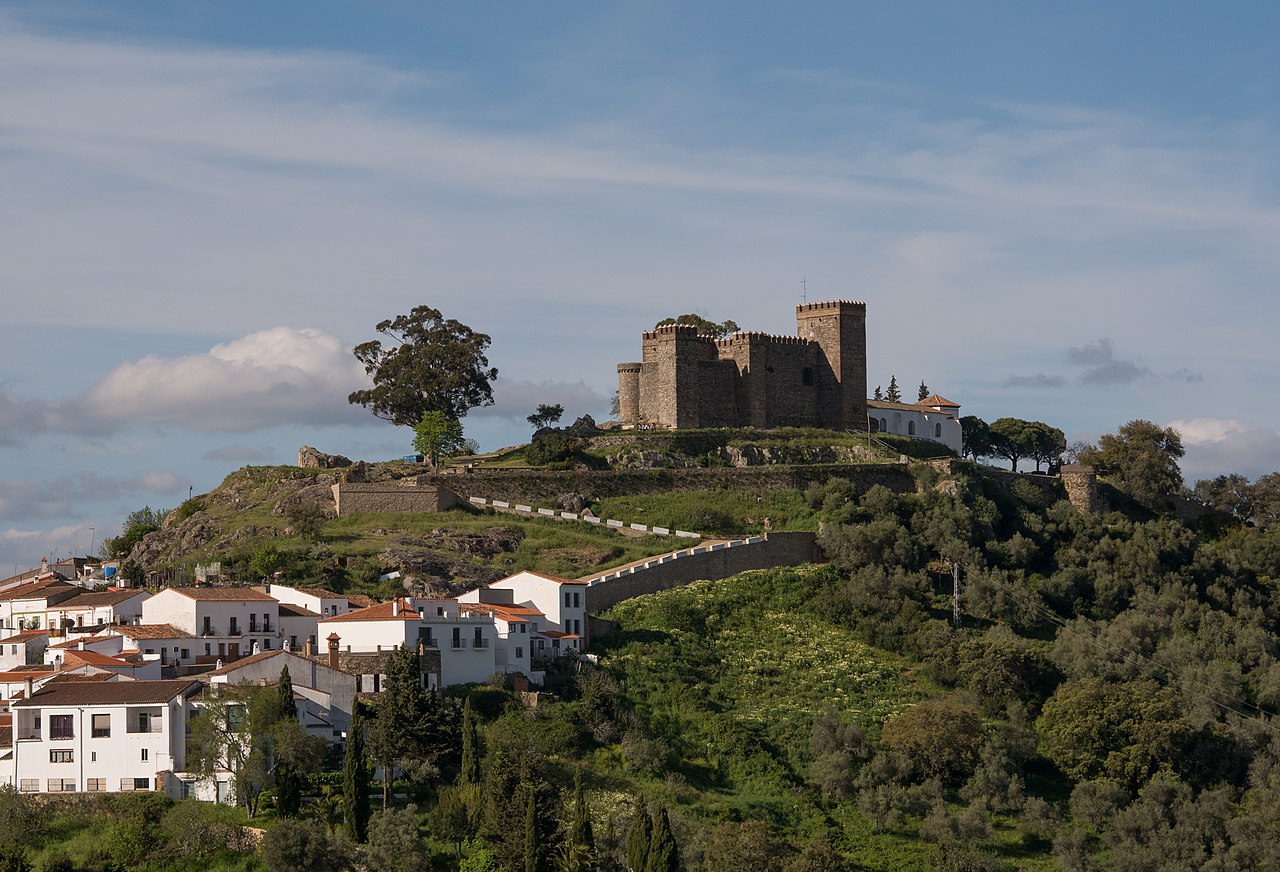 Very close to Aracena there is another town that is also rightfully included among the most beautiful towns in Huelva. This is Cortegana and combines a magnificent monumental heritage with spectacular surroundings.

Regarding the first, its great symbol is the castle. It was built in the XNUMXth century and consists of a fortress, a barbican and a hermitage, that of Nuestra Señora de la Piedad. Currently, some medieval days very interesting.

The most important religious building in Cortegana is the church of the Divine Savior, built in the fourteenth century in the Mudejar Gothic style, although later extensions gave it Renaissance features. In addition, inside, you can see a spectacular mexican silverware collection from the XNUMXth century, a pulpit from the same period and an impressive iron lattice, as well as a rich religious imagery.

We also advise you to see in the Huelva town the church of san sebastian, also Gothic Mudejar; the hermitage of Calvario and the buildings of the Grand Casino Society and the Capitol-Sierra theater.

In conclusion, we have taken with you a tour of some of the most beautiful towns in Huelva. However, in a province like Huelva there are many other beautiful towns. This is the case, for example, of Jabugo, cradle of the ham of the same name; from Almonaster la Real, with its XNUMXth century mosque and its spectacular bridge of the Three Fountains, or Sanlúcar de Guadiana, with its imposing castle of San Marcos. Are not you enough reasons to visit Huelva?