Nepal, It is a small landlocked country that is in Asia, on the Indian subcontinent. It is in the Himalayas and its neighbors are China, India and Bhutan. Yes, its neighbors are much larger but still small, Nepal has a variety of landscapes and a very interesting cultural wealth.

Today, at Actualidad Viajes, we focus on what to see in Nepal.

It is a small, rectangular country of about 147.516 square kilometers of surface. We can speak of three zones: the Terai, the hills and the mountains, in a certain way three ecological rings cut by the basins of several mountain rivers. Terai is the border with India so the climate here is hot and humid.

The hills, next to the mountains, have a variable height between one thousand and four thousand meters, and are very fertile and inhabited territory since it is an area of ​​rich valleys. The one in Kathmandu, for example. And finally, the mountains, which is where Mount Everest and others of infernal heights are. It is the part that borders China. Despite these three geographical areas, the truth is that the country registers five climatic zones: the temperate, the tropical and subtropical, the cold and the sub-arctic.

Until the 90s the country was an absolute monarchy which later became a parliamentary monarchy. At the beginning of the XNUMXst century and after many popular protests in 2007 the monarchy was abolished and in the 2008 elections he won Communist Party of Nepal Maoist court. In 2015 a woman won the presidency, Bidhya Devi Bhandan.

What to see in Nepal

We talk about how Nepal was for a long time a monarchical country so we can start with visit the royal city of Patan. Here there are countless temples, monuments and monasteries and a great cultural wealth. The architecture is wonderful and the palace complex is huge. You have to take a souvenir with you and in this sense the metal and wood souvenirs or the Thangka paintings are great.

Durbar Square is a place to take a thousand photos and it is only one of three such in the Kathmandu Valley. You will see the most beautiful red brick floor in the world, for example. Here is the Krishna Temple.

The Himalayasobviously they are counted on the list. The views of this beautiful mountain range are breathtaking, for example, the one from Nagarkot, at two thousand meters high. This mountain is the second highest within the Kathmandu Valley and the view is one of the most popular postcards as well, if you wear the Mount Everest…

Speaking of Everest, if you don't want to or can't climb it, you can have a good view from the air. There are tourist flights an hour that provide a great perspective and is sure to be unforgettable. 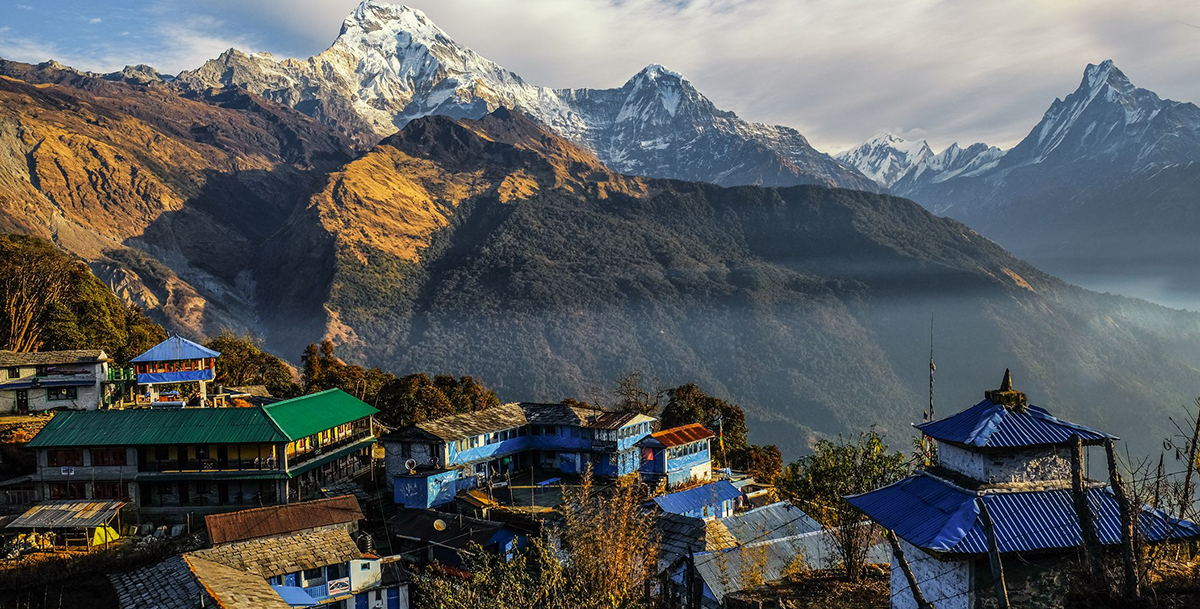 The Annapurna Region is fantastic. Trekking excursions can be hired from Pokhara to this region which is a true paradise. The hiking trails they cross picturesque villages, sacred pilgrimage sites, pine forests and crystal clear mountain lakes. A highly recommended tour is the Annapurna Circuit, for its landscapes, or the Ghorepani Poon Hill Trail, for example. These trails have different degrees of difficulty, so if walking is not your thing you can always sign up for a rafting ride through the rapids or go paragliding.

Pokhara itself is a good place to meet, very picturesque, and from there another option is to go to the Sarangkot viewpoint and enjoy the sunrise. Pokhara dates from the seventeenth century, when it was a point on the trade route between India and China, so even today it is because of this location, its history and its delicious cuisine that it is still a popular destination.

Meanwhile Bhaktapur offers great views of the Himalayas, but there are also pagodas and temples to visit. The pagodas are very well preserved and the palaces and temples are worth a visit. The city is very cultural and celebrates many religious festivals.

If you like fishing, swimming or canoeing there is the Phewa Lake, a freshwater lake where always there are colored boats for rent, a cute boardwalk and many little bars. Either you walk along the shore of the lake, or drink a beer or simply admire the nature and the delicate Nepalese architecture that decorates everything.

Dhulikhel is at 1550 meters of altitude so clean air and silence are assured. It is an old town, with narrow cobbled streets flanked by traditional houses with colored doors and windows. Too there are stupas and temples to see and photograph.

El Chitwan National Park, in the Terai area, bordering India, is another popular tourist site. There are many wild animals, including rhinos, monkeys and antelopes, and it is the land of the Chepang people. If you like safaris this is the best destination in Nepal, although there are two other national parks that offer something similar: the Sagarmatha National Park and Bardiya National Park.

And what about Kathmandu? Popular name if there are, this beautiful valley has seven sites that have been declared World Heritage by UNESCO. Unfortunately, the 2015 earthquake caused a lot of damage to this historic city and it is taking time to recover, even worse if you go on a trip you cannot miss it.

One of the most popular attractions here is the Boudhanath stupa, simply called Boudha, but there is also the Pashupathinath Temple or the Durbar Square, in the heart of the city which is where the coronations of the kings took place until the XNUMXth century. From Kathmandu you can do the day trip until Swayambhunath Temple, 2500 years old, of great architectural beauty, on a hill studded with trees.

If so much landscape, hill, mountain and lake make you love the simple life of a village, you can always give it a look at typical Nepalese village life. Thinking of tourism, the village that is well prepared for this is the Newari village of Bandipur, right on the road to Pokhara. It is a typical Himalayan village and was once a classic post on the route between India and Tibet. What a beautiful site! Its buildings are old, classic, there are temples, sanctuaries and more modern cafes that accompany the tourist well.

So far a glimpse of what to see in Nepal, but naturally it is not the only thing. We can say that the places to visit in Nepal are the Everst, Dolpo, Chitwan, Lumbini which is where Buddha was born, Kumari, the Gokyo Valley, the Kopan or Tengboche Monastery. And what we can do has to do with mountain activities, cultural and religious walks.

Finally, What about Covid 19 in Nepal? Today if you have the two doses of the Covid 19 vaccine, you do not quarantine, both doses must be at least 14 days before the trip. If you do not have both vaccines, you must process a visa before traveling to Nepal and quarantine 10 days before. You also have to go with a negative PCR 72 hours before if you arrive by air and within 72 hours if you arrive by land.