The answer to the question where to go on vacation in Spain it is multiple. That is, it does not admit a single answer. Our country is full of charming places in which to enjoy some wonderful days off. From the north with its green nature, its rugged beaches and its delicious cuisine to the south with its enviable climate, the joy of its people and wide sandy beaches, all of Spain is worth a visit.

And all this without mentioning the historical Castilla y Aragon, the sunny Valencia (here we leave you an article about this city) or the singular Catalonia. However, we are going to recommend five destinations to go on vacation in Spain.

For all that we have told you, we are going to make a synthesis effort to recommend five of the places where you can enjoy unforgettable experiences. holidays in Spain. We will ensure that they belong to all corners of our country and that they are as representative as possible of its rich diversity.

San Sebastián and the Basque coast

We will begin our recommendations in the north of Spain. We could talk to you about the monumental Santander, from the historical Asturias or of the precious Galician coasts. But we chose the capital of Guipúzcoa because, in our opinion, it is one of the most beautiful cities in Spain.

It is no coincidence that it has been one of the most visited vacation destinations throughout our history. The precious La Concha bay, with its beach, was a bathing place even for royalty and many of its buildings respond to that historical splendor.

You can start your visit to San Sebastián by old part, with its fishing port and its narrow cobbled streets full of taverns where you can savor the famous pintxos. We also advise you to visit the impressive Baroque basilica of Santa María del Coro and the Gothic church of San Vicente. You will also find in this area the San Telmo museums, on Basque history, and Naval. Also, don't forget to go up to the mount Urgull, where you can appreciate extraordinary views of the bay.

However, perhaps even more famous is the other mountain at the opposite end of La Concha. We talk to you about mount Igueldo, in which, in addition to the landscape, you have an amusement park in the style belle epoque with a dizzying roller coaster. To get there, you can use the old funicular, which has been running since 1912.

Finally, you have to see the call in San Sebastián romantic area, which coincides with the area of ​​the expansion of the city and includes buildings from the late nineteenth century such as the old building of the Gran Casino, the Victoria Eugenia Theater or the Hotel María Cristina. However, perhaps the most emblematic construction of this part of the city is the Good Shepherd cathedral, built in 1897 following the neo-Gothic canons.

But the wonders that a holiday in Guipúzcoa offers you do not end in San Sebastián. We advise you to visit the nearby towns on the Basque coast. And above all, hernani, whose historic center is a Site of Cultural Interest; Azkoitia, with numerous monumental constructions such as its tower houses; Hondarribia, with its imposing walls or small fishing villages such as Getaria where you will find magnificent beaches.

Córdoba and its towns, among the essential places to spend a good vacation

If you are wondering where to go on vacation in Spain, we are now going to tell you about a destination that you should visit at least once in your life. We refer to the historic Córdoba, with its Caliphate tradition and its wonderful monuments. It is no coincidence that it is the city with the most titles of World Heritage in the world.

Founded by the Romans in the XNUMXnd century BC, Córdoba has numerous monuments from all eras, although it lived through its heyday under Muslim rule, when it was the capital of the Caliphate.

The Roman theater, bridge and temple, among other constructions, belong to the Latin period. But the great symbol of the city is the famous Mosque, built in the XNUMXth century on the remains of an old Visigoth church. By itself, it would be reason enough for you to visit Córdoba.

Even today it is the third largest in the world after Mecca and the Istanbul mosque, although it is now a Catholic cathedral. Among what you can see in it are the Patio de los Naranjos, the Renaissance bell tower, the many doors such as the Postigo del Palacio or Santa Catalina and the famous hypostyle room. But also the choir, the main altarpiece or the spectacular macura.

As you may have guessed, the Mosque is not the only monument from the Muslim era that you can see in Córdoba. The Guadalquivir mills or the Caliphate baths also belong to it. But more important is the imposing Medina Azahara.

Located about eight kilometers from Córdoba, at the foot of Sierra Morena, is an ancient palatine city built by the caliph Abdullah III. Despite its age, it is very well preserved. Among the wonders that you can see in it are the Great Portico, the upper basilica building, the Rich Room or the house of Jafar.

Since you are in Córdoba, we advise you to also visit towns such as Montilla, with the remains of its old castle; Ruth, with its Arab remains, and Prigogo, with its neighborhood of La Villa and its Balcony of Adarve. But also Baena, with its archaeological remains; Zuheros, where the Cave of the Bats is located; Almodóvar del Río, with its XNUMXth century church, and hornachuelos, with its palace and gardens of Moratalla, known as «The Versailles of Córdoba».

The unknown Murcia, another place to go on vacation in Spain

Murcia (calle Trapería), a great destination to go on vacation in Spain

Murcia does not figure among the most touristic places in our country. However, it has a lot to offer you. And we are not just talking about its wonderful beaches, especially those located in the surroundings of The Sleeve of the Mar Menor, nor of its warm and pleasant climate.

The capital of the province itself has an enviable monumental complex. Its old town, around the Cardinal Belluga Square, has enormous interest. There is the Cathedral of Santa María, which combines Gothic, Renaissance and, above all, Baroque styles. In addition, its spectacular bell tower, 93 meters high, is the symbol of the city.

Next to the cathedral, there is the old Major Seminary of San Fulgencio and Episcopal palace, both from the XNUMXth century. But you should also stroll through the pedestrian streets of the center, such as the Silverware and the Trapería. In the first, you can see several modernist buildings such as the old La Alegría de la Huerta department store, while in the second, the Almodóvar Palace and the Gran Casino stand out.

On the other hand, another of the most relevant buildings in Murcia is the Monastery of Santa Clara la Real, in whose interior, in addition, are the remains of the Alcázar Follow, an Arab palace from the thirteenth century, and that offers you a museum of sacred and Andalusian art.

Finally, we also advise you to see in the city of Segura its modernist palaces and buildings. Among the first, those of the Pérez-Calvillo, Vinader, Fontes and Almudí family. And, regarding the latter, the houses Díaz-Cassou, Almansa, Guillamón and the Mercado de Verónicas. 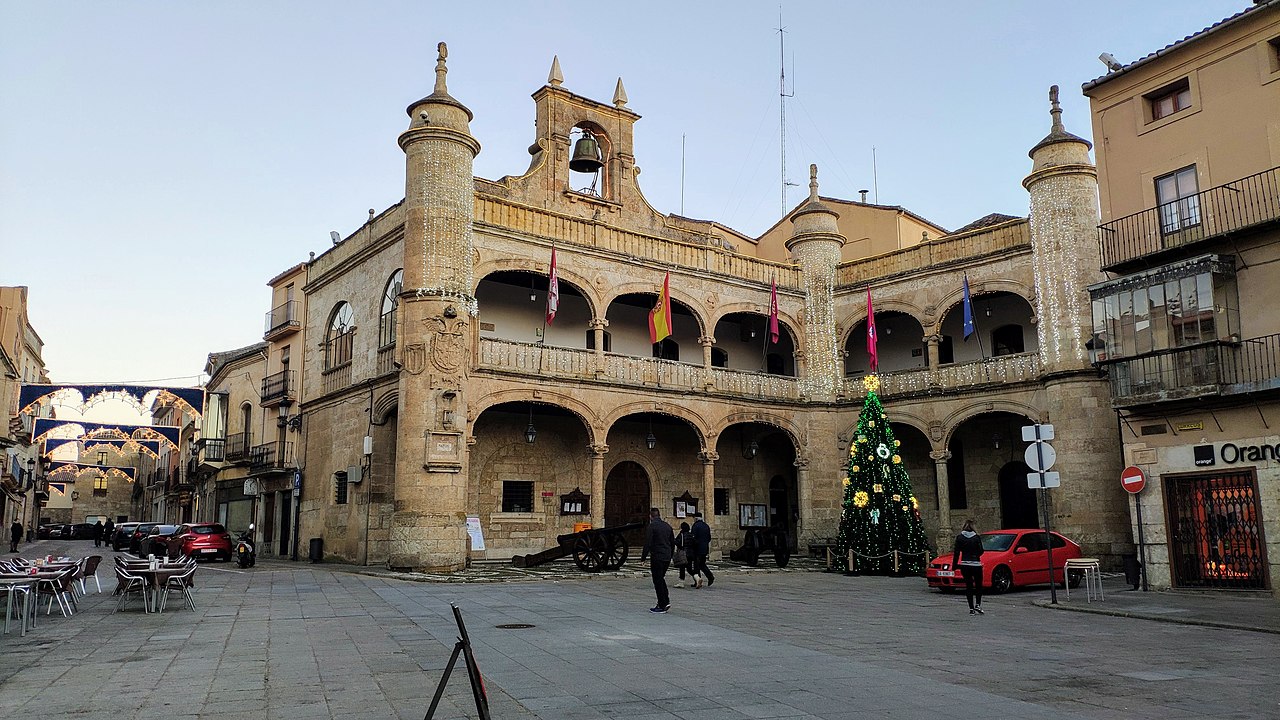 We have told you about places to go on vacation in Spain that are to the north, south and east. We are now going to do it from a beautiful town that is to the west. We refer to Ciudad Rodrigo, all of it declared Historic Artistic Set.

You will not be surprised by the recognition if we tell you that its monumental heritage begins on its own walls, which are still preserved almost intact today. Already inside the city, you have wonders like him castle of Henry II, dated in the fourteenth century; the Town hall, Renaissance style, or the Passion Hospital.

But it also has Ciudad Rodrigo with an important religious architecture. The Cathedral of Santa María, Romanesque work of transition to Gothic and whose Main Chapel houses a spectacular Spanish-Flemish altarpiece. You should also visit the churches of San Andrés and San Cristóbal and the spectacular Chapel of Cerralbo, of Herrerian style, as well as the convent of San Agustín and the Seminary of San Cayetano.

Finally, returning to civil architecture, we also recommend visiting the Vázquez and Cadena houses and the palaces of the Marchioness of Cartago and the Águila in Ciudad Rodrigo.

The towns of Soria 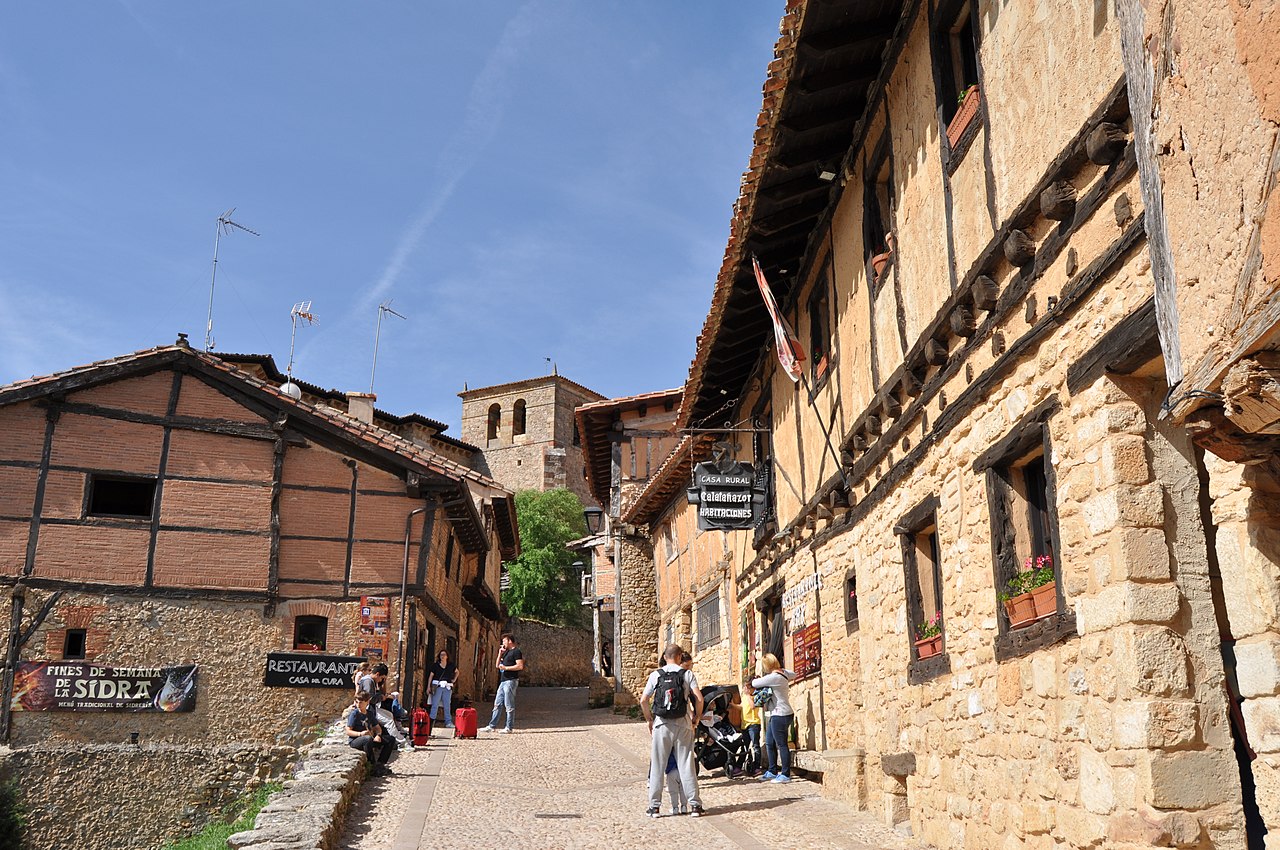 We are now traveling to rural Spain to propose a trip through the towns of Soria, some of which are among the most beautiful in the country. We talk to you about towns like Burg of Osma, with its spectacular Cathedral of Santa María de la Asunción, its old Hospital de San Agustín and its castle, of which remains are preserved.

But we also refer to towns like Catalanazor, which retains all its medieval charm; medinaceli, with its castle, its ducal palace and its collegiate church, or Almazán, with its great Romanesque heritage.

And even others less known as Yanguas, which also has an imposing castle; rello, nestled on a limestone crag, or Monteagudo of the Vicariates, which, in the absence of a castle, has two: La Raya and the Reward Palace. All this without forgetting natural wonders such as Vinuesa, located at the foot of the Urbión peak and the famous Laguna Negra.

In conclusion, we have told you about five places where to go on vacation in Spain. But the richness and diversity of our country is so great that we could offer you many more. For example, the precious Costa Brava, a tour of the Cadiz towns (here you have an article about them), the monumental city of Burgos or Galician Rías Altas y Bajas. Don't they seem like wonderful destinations to you?

Full path to article: Travel News » Touristic destinations » Where to go on vacation in Spain?